As Americans hunker down at home with less appetite or ability to travel, the pages of books translated from other languages can transport them to other cultures and places.

“Literature is a portal into other people’s way of life and thinking,” said Michael Z. Wise, co-founder of New Vessel Press in New York, which specializes in translated works.

For instance, in February his press will publish Sergei Lebedev’s Untraceable, a thriller about Soviet use of poison to attack enemies. The book, he said, gives insight into authoritarian governments.

Literature in translation is important today, said Chad W. Post, publisher at Open Letter Books at the University of Rochester.

“This is a time for everybody, Americans in particular, to think about other people’s perspectives,” Post said. “We are a connected world, not necessarily coming together. It’s important during COVID not to retreat into walled-off identities.” 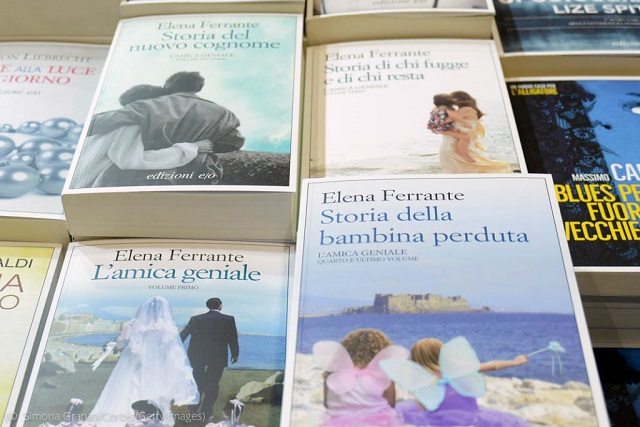 English translations of books by Elena Ferrante, shown here in their original Italian, are popular among Americans. (© Simona Granati/Corbis/Getty Images)

About 1% of fiction and poetry books sold in the U.S. are translations from foreign authors, Post said. That share is up a bit from 0.7% in 2008, the year Post started keeping track. (If he were to include language books and manga, today’s share would be 3%.) Still, the overall number of those books has risen along with book sales generally. In 2019, 572 new fiction and poetry books in translation were published in the United States.

At the start of the pandemic, many readers turned to old favorites, Post said. “Now we’re getting back to something new rather than retreating back into classics from a simpler time.”

Like much of the publishing industry, literature in translation is a bit of a winner-take-all situation. Between online shopping algorithms that keep already popular authors in front of people browsing and a dearth of newspaper book reviews to publicize new writers, much of the spotlight and business flows to known authors, according to Post.

Among translations that have been popular recently have been the late Stieg Larsson’s Swedish thrillers and Elena Ferrante’s tales of strong Italian women. Many other authors from around the world compete for what’s left of the American market. But Ferrante, whose new book is The Lying Life of Adults, has opened American readers’ minds to books set outside the U.S., Wise said.

Digital book sales are up 120% during the pandemic for Wise. But he worries that many independent bookstores — who are boosters of literature in translation — won’t survive the drop in traffic.

Although Wise runs a for-profit press, many of the publishers that specialize in translations have academic or philanthropic support. A notable exception is Amazon, which is by far the largest publisher of translations, according to Post. Its Amazon Crossing imprint focuses almost entirely on electronic books and features authors popular in other countries and types of books popular with American readers, such as romances, thrillers and science fiction.

“We really try to be inventive in how we find great stories,” said Liza Darnton, senior editor. “We engage with the translator community as much as we can, and we work with colleagues around the world to find great books.” Amazon Crossing has published 400 books since 2010 from authors in 44 countries. And in 2019, Amazon Crossing Kids was created.

“There are just amazingly good writers around the world and there’s no reason they can’t be great in English,” Post said.