Balancing the Scales: An Interview with Sharon Rowen

Sharon Rowen is an attorney and documentary filmmaker who exposes gender inequality in the legal profession in her thought-provoking film, Balancing the Scales. Based on interviews with a broad spectrum of attorneys and judges conducted over two decades, the film explores why women have been unable to achieve positions of leadership in the law at the same rate as men, despite attending law school in equal numbers. The women’s stories represent a variety of perspectives across five generations – from Supreme Court Justice Ruth Bader Ginsburg recalling the dearth of women’s bathrooms at Harvard Law School in the 1950s to contemporary women attorneys lamenting the difficult choice between having a family or being an equity partner in a law firm.

Rowen has presented her film to audiences around the world. The U.S. Embassy in Tokyo and the U.S. Consulates General in Osaka and Naha organized screenings of the film for attorneys, businesspeople, professors, and students. The film has sparked conversations across Japan about gender equality in the law and beyond. American View sat down with Rowen after one of these programs to learn more about her inspiration for the film and its valuable insights on unconscious bias, work-life balance, and the pressure to “have it all.” 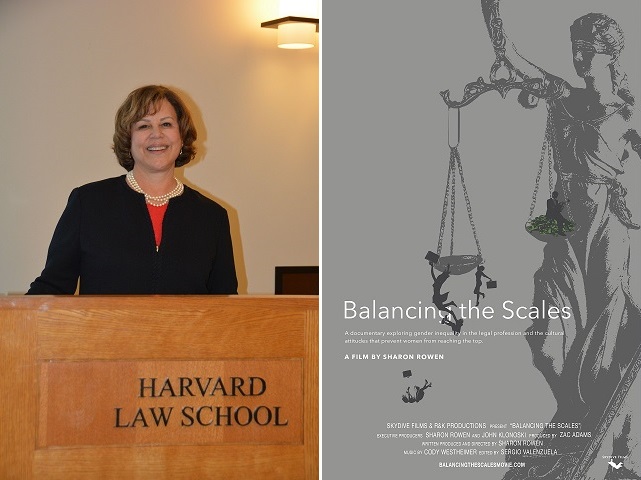 Sharon Rowen speaks at a summit on Retention of Women in the Legal Profession sponsored by the American Bar Association and Harvard Law School.

American View:  What was your motivation to make the film?

Rowen:  I started practicing law in 1979. At that time, you could not get an interview with a large law firm if you were a woman. A judge told me women shouldn’t practice law. As the feminist movement made progress in the ‘70s and ‘80s, I began to interview women I admired. In 1994, my daughter was born. I wanted her to have an easier time than me, and in the 90s, it seemed like everyone was equal – 50% women in law schools meant 50% women in equity partnerships, right? But as I continued to interview women, I realized that wasn’t the case, so the film’s focus became the stories of inequality at the higher levels of the profession.

American View:  Looking back over the different generations of women you interviewed, how do you think things have changed?

Rowen:  Definitely things are better. The women I interviewed who practiced in the 1930s had some pretty amazing stories to tell of overt discrimination. But then the discrimination went underground.  It’s two steps forward, one step back. I think women are having a hard time today if they want to attain leadership roles in the legal field. I’m not worried about women being hired as associates. Firms are hiring women in the same numbers as men. The problem has become how to get women into leadership positions and why women are leaving the profession.

American View:  Why do you think that women are leaving the profession? You’ve referred to this as the “leaky pipeline.”

Rowen:  It’s a real thing. It’s a combination of day after day, year after year, having to put up with bias, comments, lack of promotion, non-equal pay, plus often, another full-time job at home. Who can put up with that year after year? You just get tired. That’s why women leave. 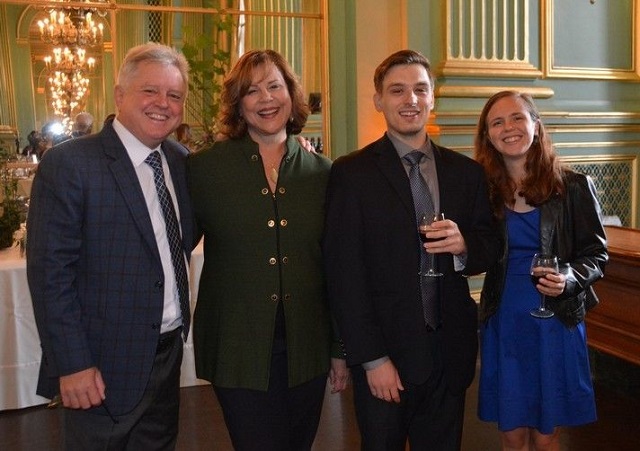 Sharon Rowen with her family who supported and inspired her in making the documentary.

American View:  You’ve stated that discrimination has shifted from the overt to the subtle. What role do you think unconscious bias is playing in holding women back from high-level positions?

Rowen:  I’ll give you an example. When I show the film to very large law firms and we have a talk afterwards, the managing partner will come up to me and say, “Great presentation, thank you, but our firm is pretty good.” That’s what they all say. And then he and the older men leave the room, and the young women come up to me and say, “No it’s not okay. We deal with stuff every single day, people making comments and not giving us origination credit for our work. Managers not promoting us, not giving us the important work to do, and not being mentors to us and making sure our work is known to the leaders who make partnership decisions.” Another thing I find interesting is that everybody thinks if they know in their brain that there is unconscious bias, then they only need training to overcome it. And they never explore anything further. For example, if you’re a manager that promotes people, how many women have you promoted in the last year? If you haven’t promoted any, the firm should penalize you. That never happens. There’s a long way to go.

Rowen:  There has to be noise about hiring women into leadership positions. Research shows that unless you have a third of women in leadership roles, people will say, “She made it but she’s very unusual.  She’s a token woman.” That’s what people who are there now – both women and men – must work toward. And amplification is important. For example, a woman says something, and nobody reacts. A man says the very same thing, and suddenly, everybody thinks that’s a great idea. Amplification is when men and women say, “That’s what the woman said five minutes ago. Give her credit for that.”

American View:  What role do men play in balancing the scales?

Rowen:  They have a responsibility, but they often don’t know how to help. There are programs now that help them learn how to be the good guys. They can’t say, “It’s not my fight, so I’m going to leave it to the women.” When they encounter sexism, they need to know they can do something about it. 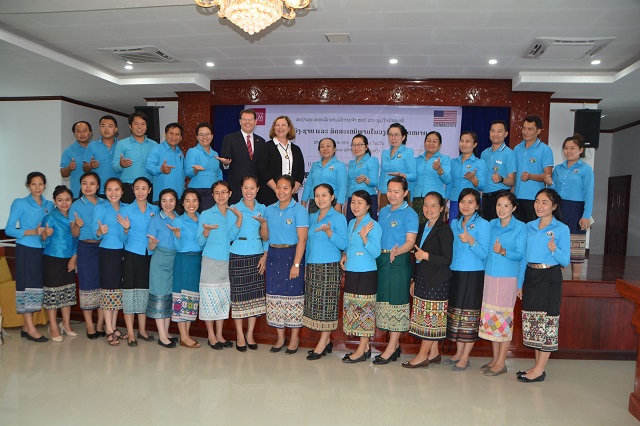 Sharon Rowen speaks to the Laos PDR Women’s Union, an organization that promotes the status and role of women in Laos.

Rowen:  Absolutely. There are certain things that only governments can do or regulate, such as subsidized childcare. Why is it that the United States does not have it when every other developed country in the world does? If you work in New York City, you pay as much in childcare for two kids as what you’re making. What kind of choice is that? The whole idea in the United States that if you work hard enough you can make it may have been true at one time, but it’s not true now. Certain people and certain groups need help. There should be very clear laws about gender equality.

American View:  Law firms pressure attorneys to have high billable hours. How can firms in what is still a conservative profession be convinced that diversity and workplace flexibilities are good things and in the long run, their bottom line isn’t going to suffer?

Rowen:  There has been a lot of research to show that if you have diverse leadership, your profitability increases. Having women and women of color on boards and law firms will increase clientele and profitability by bringing different viewpoints into the boardroom.  Also, leaders in law firms need to understand that there is a different way of doing things, and it doesn’t have to be the good old boys club where men work until ten at night. The younger generation, at least in the United States, has a different mindset. They’re not willing to work that way for long, and firms must understand they’re not going to get the best people because their model is outdated. 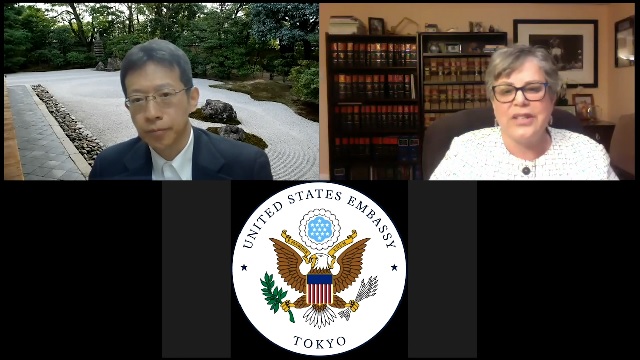 Sharon Rowen speaks to students at Ritsumeikan University in a virtual program hosted by the U.S. Embassy in Tokyo.

American View:  So many women in the film talked about the choice between having a career and having children. What advice would you give to a law student or a young associate in a firm who wants to have it all? To be an equity partner and a mother.

Rowen:  Find the right firm. Do your research.  The law student needs to find a firm with a good parental leave policy so she can step back for a while but come back and still be on the equity partnership track. And young women associates should find mentors that believe in them, that will promote them. You need allies, both at supervisory levels that will go to bat for you, and also on the same level that are willing to speak up for you. My biggest piece of advice, though, is to be your authentic self. You can’t pretend to be something you’re not year after year after year.

American View:  With respect to employment equality, Supreme Court Justice Ruth Bader Ginsburg said, “We haven’t achieved nirvana.” If we could get there or get close, what would nirvana look like.

Rowen:  If there’s a society where people don’t think about gender or race in employment, that would be it. If they just think of women as people - black, brown, white, Asian, whatever - just like children look at others and don’t see color. If we can do that in employment, that’ll do it.

Banner image: Sharon Rowen presents her film to students at Hanoi University at an event organized by the U.S. Embassy in Hanoi, Vietnam.