Scranton, Pennsylvania, in the United States, and Ballina, County Mayo, in Ireland, have a few things in common. One is the family ties of Irish workers who came to the U.S. to escape the Irish Potato Famine in the 19th century.

In Scranton, “a lot of people live on the same block as their grandmothers,” said Mayor Paige Gebhardt Cognetti. “There are a lot of people who have stayed and contributed. Both [Scranton and Ballina] are built on a proud history.”

Ballina, a town of fewer than 11,000, sits at the mouth of the Moy River and touts itself as the salmon capital of Ireland.

Now Scranton and Ballina have another tie: their connections to a U.S. president.

Like so many Scranton natives (nearly a quarter of the population is Irish-American), President Biden’s family left County Mayo as hunger and lack of opportunity swept the island. Biden’s great-great-great-grandfather Edward Blewitt and Blewitt’s son, Patrick, settled in Scranton and worked as surveyors.

When hard times hit the family again during Biden’s fourth-grade year, his father moved to Wilmington, Delaware, for work. The future president spent the rest of his childhood in Delaware, the state that would elect him to the U.S. Senate at the constitutionally required minimum age of 30.

Both Scranton and Ballina have been happy to welcome Joe Biden back. While Biden’s nuclear family moved from Scranton, his extended family stayed put, so Biden has visited many times over the years. In 2016, then-President Obama praised his vice president as a “scrappy kid from Scranton.” 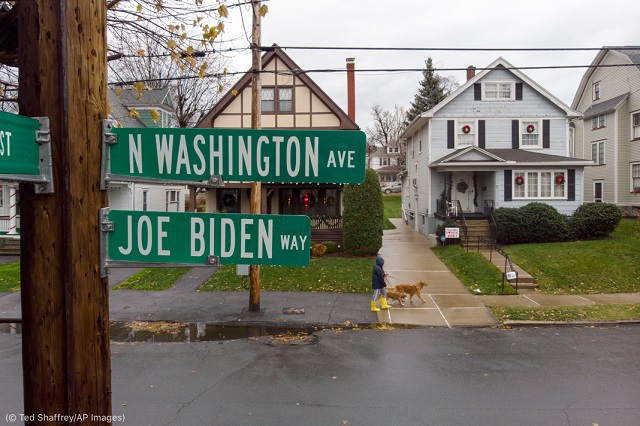 The city of Scranton has renamed the street in front of Joe Biden’s childhood home, the house at right, to honor him. (© Ted Shaffrey/AP Images)

As a presidential candidate, Biden spent part of Election Day in November 2020 visiting his childhood home, happy to recall his roots in electorally important Pennsylvania.

Although there weren’t votes to be had in the Irish town of Ballina, Biden has traveled there as well, most recently as vice president in 2016. His visits led him to distant cousins and to locals who helped him research his family genealogy.

When Biden won the U.S. presidency in November, his cousins led their Irish neighbors in popping champagne in the Ballina town square, according to the Irish Times. (For the record, Biden isn’t the first president with roots in Ballina. Former Irish President Mary Robinson was born there.)

Shared pride across the Atlantic 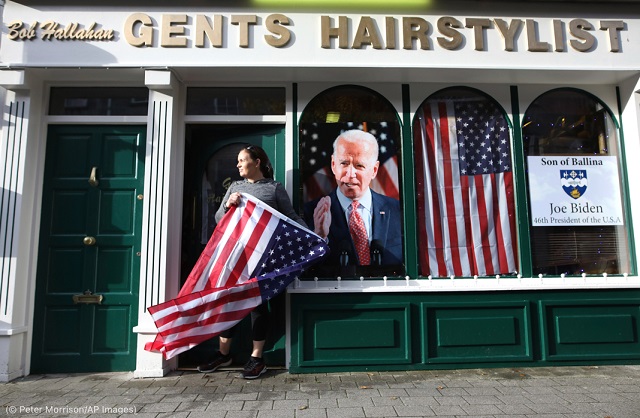 For 30 years, Scranton and Ballina have bonded through a sister city program. On the eve of Biden’s January inauguration, city councils from the two towns connected online via Zoom and talked of possible post-pandemic visits.

“My daughter will know someone from her hometown can be president,” she said. “You really can be what you want to be.”