U.S. Secretary of State Antony Blinken is urging democracies to ensure the responsible development of artificial intelligence (AI) and emerging technologies to prevent their misuse by authoritarian regimes.

In a July 13 speech to the National Security Commission on Artificial Intelligence Global Emerging Technology Summit, Blinken said emerging technologies should be used to strengthen democratic values, not enable repression.

“We need the United States and we need its partners to remain the world’s innovative leaders and standard setters,” Blinken said, urging that “universal rights and democratic values remain at the center of all the innovation that’s to come, and that it delivers real benefits in people’s lives.” 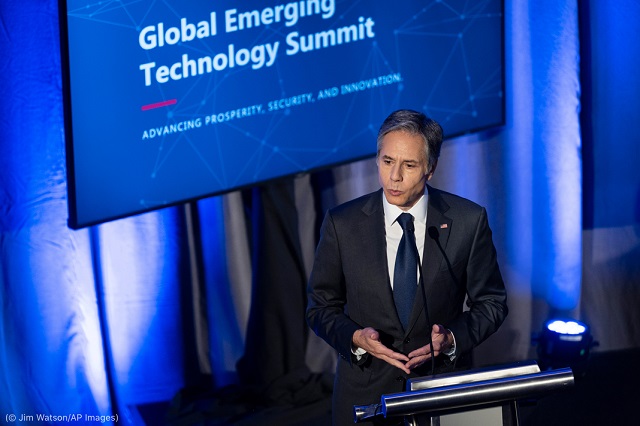 Authoritarian regimes are turning technology into tools of repression, Blinken said. He cited Russian government hacking and the People’s Republic of China’s surveillance of Uyghurs and members of other religious or ethnic minority groups in Xinjiang.

To develop technology that benefits everyone and does not support authoritarian abuse, Blinken said, democracies must:

In April, when the U.S. blamed the Russian government for cyber intrusions, the North Atlantic Treaty Organization (NATO), the European Union and 22 nations supported that conclusion. NATO has agreed that a cyberattack on one member is an attack on all members.

In 2020, the U.S. released a set of due diligence guidelines (PDF, 2.1MB) to help American companies ensure their products are not used for repression.

“Our goal is strong networks — plural — of countries, companies, universities connected by shared values and a shared commitment to design and deploy technology for the benefit of all people,” Blinken said.