The Economic Benefits of Meaningful Employment for People with Disabilities

“People with disabilities need paychecks, not pity,” she says.

At a speaking engagement sponsored by the U.S. Embassy in Tokyo on April 18, Bender explained that she established a for-profit company rather than a nonprofit organization so people wouldn’t think she was running a charity. “People with disabilities are pitied, and that must stop,” she said. “People with disabilities are equal to other people and deserve dignity and respect, and deserve to be treated like every other person. Pity is the worst thing that can happen. Pity causes companies to think the person is inferior.”

“When I started my company, I made a decision,” said Bender. “I said that people with disabilities don’t just have to work a lower-level job like a janitor or in a grocery store as a bagger or stocking in the back room. People with disabilities should be given the same opportunities as everyone else. If you’re in a wheelchair, what does that have to do with you being a computer programmer? If you’re a person who is blind today, there is software that allows you to be an engineer. If you’re a person who is deaf, there is video relay that allows you to communicate equally.” 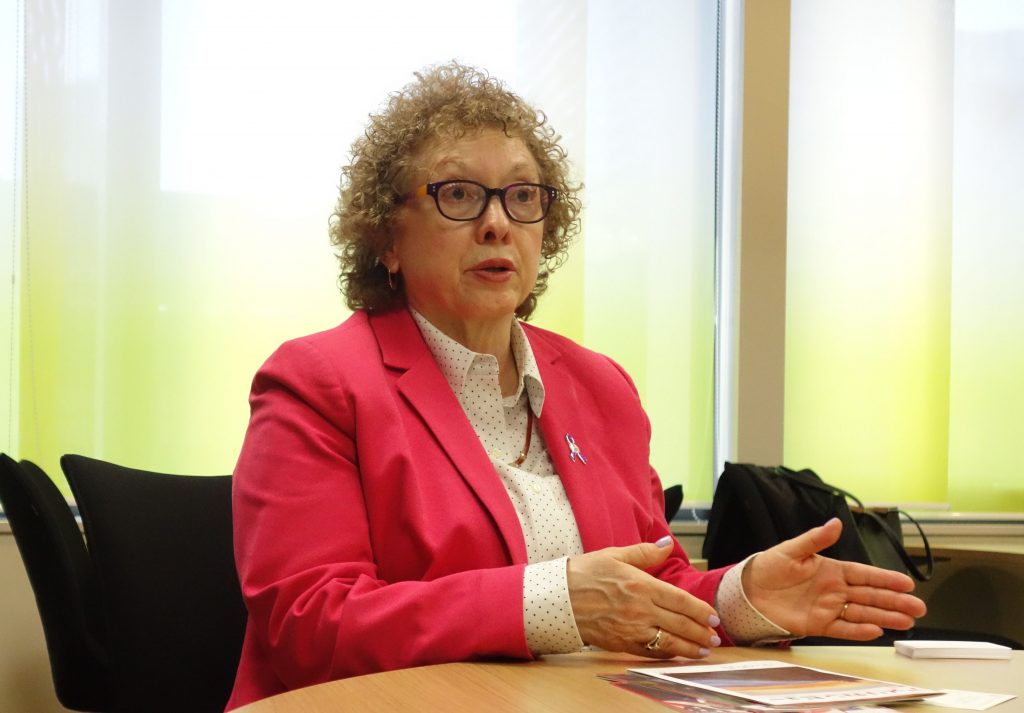 Joyce Bender speaks about employment for people with disabilities during an interview with "American View" in Tokyo.

Bender cited two examples of the economic advantages of hiring people with disabilities. In one case, an executive at a major pharmaceutical and retail outlet in the United States decided to hire a high percentage of people with disabilities at one of its major distribution centers. Productivity was higher there than at the company’s other distribution centers because of improved employee engagement and training. “That’s not charity; it’s the bottom line,” Bender stressed. 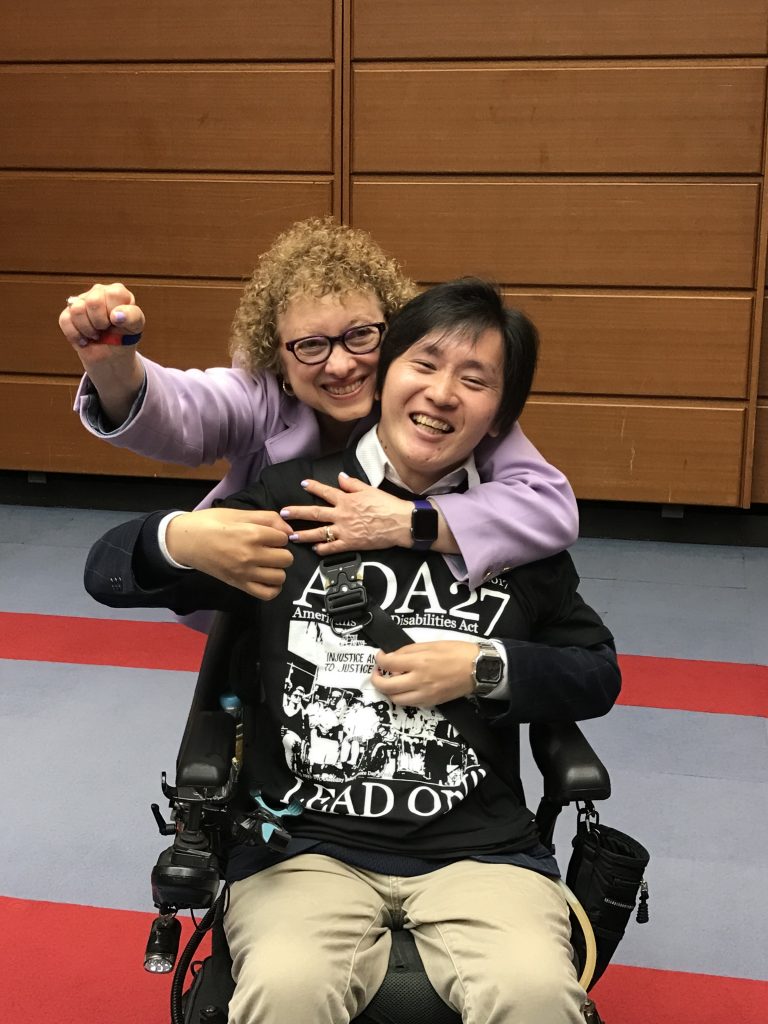 Joyce Bender interacts with a Japanese disability rights advocate at a program in Nagoya.

In the United States, the Americans with Disabilities Act (ADA) was enacted in 1990 to prohibit discrimination against people with disabilities in all areas of public life, including employment, education, and transportation. When former U.S. President George H.W. Bush signed it into law, he said, “Let the shameful wall of exclusion finally come tumbling down.” After the law was passed, Bender said, “the whole world was different for people with disabilities.” Prior to this, she explained, employers could tell job applicants with disabilities that they wouldn’t be able to do the job because the company couldn’t provide accommodations.

Although the ADA made discrimination against people with disabilities illegal and required employers to provide accommodations, attitudinal barriers still exist in the United States and elsewhere. In the interview, Bender stressed the importance of mentoring and internship programs in giving young people with disabilities the confidence to pursue their career aspirations while at the same time demonstrating to employers that hiring them is a viable option. She talked about National Disability Mentoring Day – a program in the United States under which companies bring high school students with disabilities onsite for one day of job shadowing. This not only gives the young people hope that they can do the job, but it also shows the hiring manager that they have the necessary abilities. “I really stress companies offering internships because that’s going to break down that barrier that exists toward people with disabilities,” she said. “If more employers do that in Japan, they will see that these are great people who can be good employees. And it will build a future labor pool.” 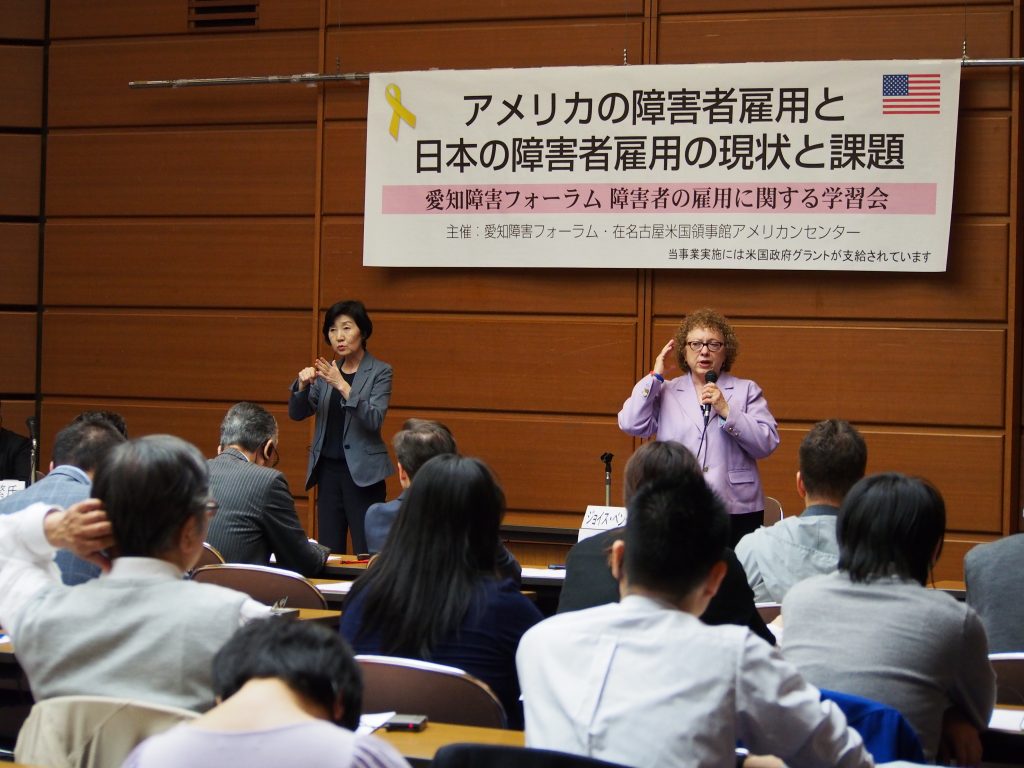 Joyce Bender speaks at a program in Nagoya organized by the U.S. Consulate in Nagoya and the Aichi Disability Forum.

Bender’s company also organizes programs for young people with disabilities to help them plan their career goals and prepare to enter the workforce. “Don’t let anyone lower the bar for you,” she tells them. “Don’t let anyone tell you what you cannot do. You have to believe in yourself and what you can accomplish. You can’t think you’re inferior, because you’re not. You’re a person who just happens to have a disability."