Fried chicken is one of the most delicious and popular foods on the planet, and the American version of it is iconic. By “American” fried chicken, I mean the basic formula of cutting a chicken into large, bone-in pieces, coating the pieces with seasoned flour, and frying them in oil. For much of U.S. history, African American cooks in the American South were credited with raising the preparation of fried chicken to an art form. In time, African Americans leveraged their widespread reputation for this delicacy to build community, strengthen family ties, and generate wealth. 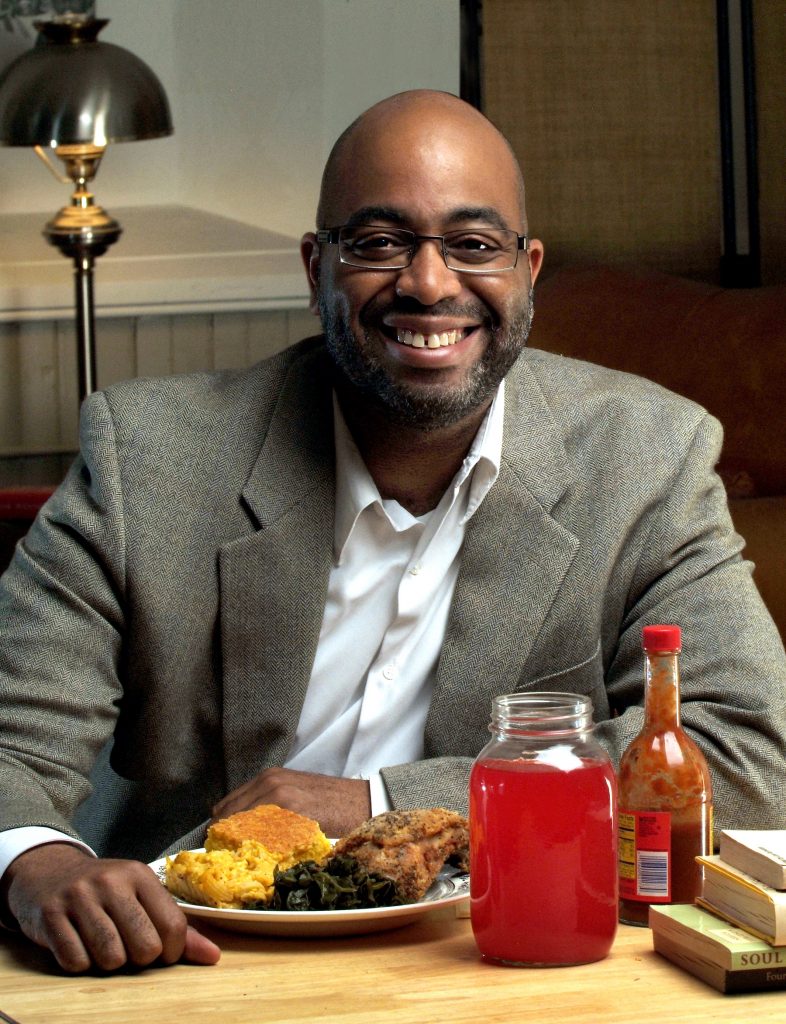 Because of fried chicken’s worldwide popularity, many cultures claim it as their own. Some look to West Africa as its place of origin. Why? Because it’s the ancestral home of African Americans, and chickens have been prevalent in the region since the Middle Ages. The region’s cooks have also deep-fried foods for centuries. Yet, the way that West Africans traditionally make chicken dishes is what is generally described as a fricassee: frying the meat, often de-boned and cut into smaller pieces, in shallow oil for a quick sear, and then braising the meat in some sort of sauce with vegetables.

Others say that we should look to Western Europe, particularly Scotland, as the true origin of fried chicken. People from that part of the world certainly brought a version of it to British North America in the 1600s and 1700s—at the very time that fried chicken recipes appeared in British cookbooks. Those British recipes for fried chicken are remarkably similar to the American recipes for the same dish that later appeared in the early 1800s. The difference is that, while fried chicken was never a big part of British cuisine, British slaveholding colonists in the American South made it a signature dish. These white slaveholders made enslaved African Americans prepare fried chicken in southern plantation kitchens. Through years of trial-and-error, African American cooks became adept at making the dish. From those culinary roots, “southern” fried chicken went from being a relished regional food to a popular national food simply called “fried chicken,” and, finally, a global phenomenon. 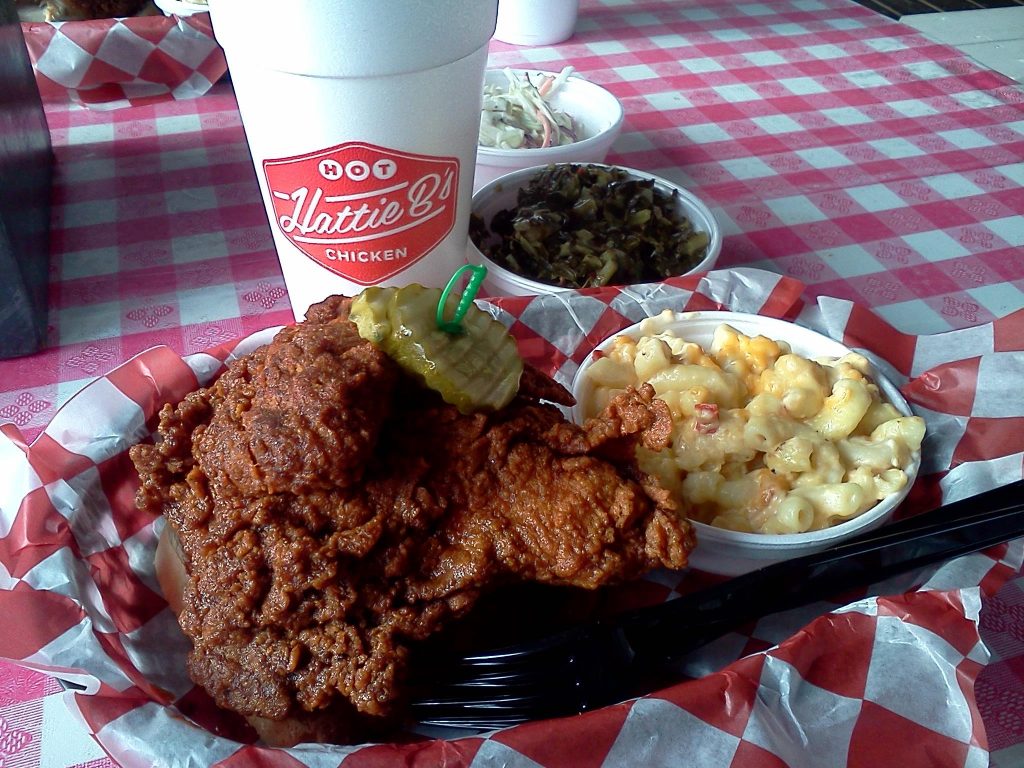 As fried chicken went mainstream, African Americans embraced it in their culture as well. However, that doesn’t mean that there was nonstop chicken eating. Before the 20th century, fried chicken preparation was very labor intensive, which meant it was eaten infrequently. Someone had to kill a chicken, pluck it, clean it, butcher it, season it, flour it, and then cook it. Because of all the time involved, cooks waited until the weekend meals and special occasions to make fried chicken. Its versatility also increased its popularity. From the centuries-old, basic recipe, cooks have let their imaginations run wild by varying the ingredients in the ways that chicken is marinated (or not), seasoned, coated, and fried. On top of that, fried chicken tastes good hot, warm, and even cold. No wonder it’s so popular wherever it goes.

African Americans flocked to the communal occasions where fried chicken was the starring attraction. During the summer months, people enjoyed fried chicken at Fourth of July celebrations, civic occasions, and church gatherings. The role of fried chicken in religious life bears special attention. Chickens acquired divine significance in West Africa where the animals were used in a number of religious rituals, and enslaved Africans transplanted those spiritual practices in the Americas. In the Southern United States, African Americans made fried chicken the "go to" dish for the communal meal after church because it was something that could feed a crowd. Given the geographic isolation of the rural South, church was an important gathering place where people caught up with family and friends. Thus, the African American church was an important spiritual and social institution that helped build a more cohesive African American community. African American preachers figured out pretty early on that good food would help increase the size of their congregations!

Fried chicken was also an important way that a church with a lot of poor members could still show their appreciation to their pastor. After service, the pastor often went to a congregant's home for dinner. Of course, the pastor picked the home of someone who had a good reputation for making the dish. As the honored guest, the pastor was served first and got the best pieces of fried chicken, also known as "preacher's parts." With fried chicken so imbued with religious connotation, it earned the nicknames "Gospel Bird" or "Sunday Cluck.” These nicknames endured as African American families, whether a preacher was dining with them or not, kept up the tradition of having fried chicken for Sunday dinner. 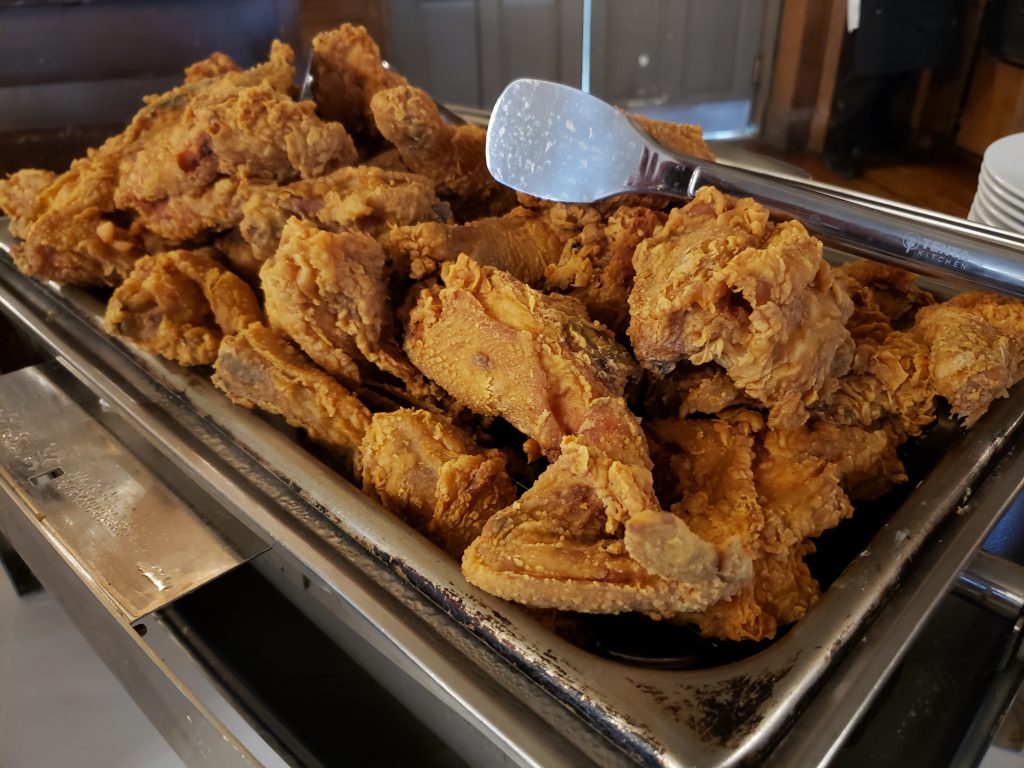 Fried chicken also created numerous money-making opportunities, even during slavery. Enslaved African Americans highly valued chickens because many slaveholders allowed them to raise their own chickens. During what little leisure time they had, enslaved people would go to the nearest market and barter or sell live chickens, eggs, or fried chicken. Some made enough money to buy their own freedom as a result.

After Emancipation, African Americans were able to make and sell fried chicken on their own terms, and many capitalized on the new opportunities available to them. African Americans with reputed fried chicken skills were able to command better wages by cooking in private homes, hotels, restaurants, steamboats, and luxury passenger trains. Prestigious restaurants in cities outside of the South recruited these cooks so their customers could get a taste of the real South. Fried chicken street vendors also proliferated anywhere food could be sold. A well-known example is at train stations. In the late 1800s, the African American women who sold food at the Gordonsville train station in Virginia were famous for the baskets stuffed with fried chicken and bread that they sold to passengers through the windows.

As millions of African Americans moved from the rural South to urban areas, entrepreneurs opened restaurants that specialized in fried chicken. Some were so successful that they operated multiple locations. More so than any other food in African American cuisine, fried chicken generated wealth and middle-class respectability.

For African Americans, there are four major fried chicken trends. The first is pairing fried chicken with waffles. Called “chicken and waffles,” it is a culinary combination that dates back a couple of centuries, but its popularity was rekindled in the 1990s. Another trend is to make an extremely spicy version where the chicken is immersed in a chile paste after it’s fried. This incendiary dish is commonly known as “Nashville hot chicken.” Interestingly, it has also become popular to stuff fried chicken with other soul food items like stewed collard greens or macaroni and cheese. Meat-free versions of fried chicken are popping up all over the country. At vegan restaurants, tofu is typically the cook’s choice, and it’s treated the same way as raw chicken during the cooking process. The final product looks like fried chicken, but differs in texture and taste. 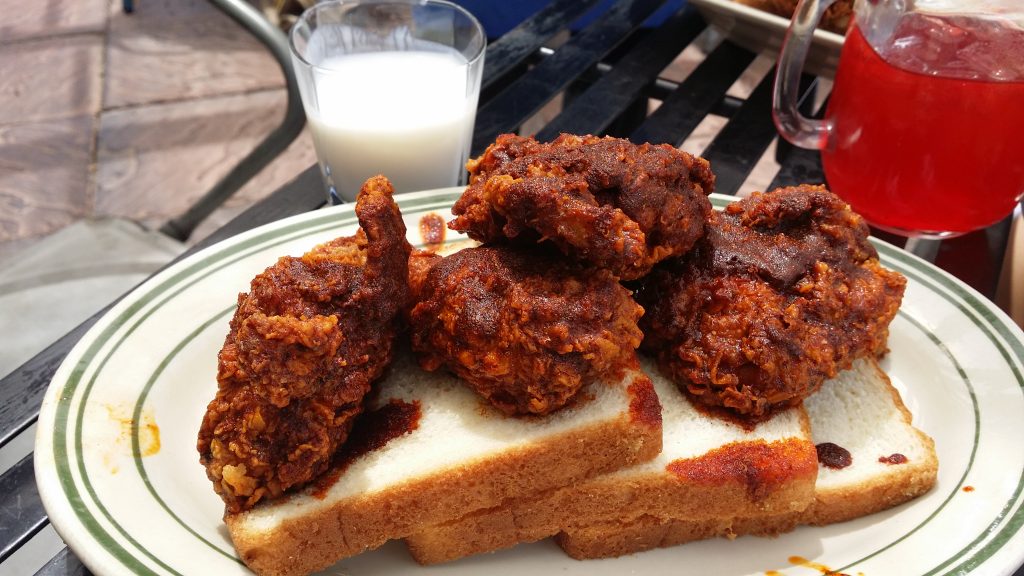 Since this article is for readers in Japan, I feel it’s my responsibility to impart one more tidbit of information about fried chicken:  No one in the United States dines at Kentucky Fried Chicken on Christmas Day. The restaurants are all closed that day.  I know, I know, it’s disappointing. The good news is that you may certainly enjoy fried chicken any other day of the year!