One day late in 1949, in the aftermath of World War II, U.S. Army Master Sergeant Hugh O’Reilly and almost a dozen other soldiers accompanied some Red Cross volunteers to a holiday party at an orphanage in Osaka. What O’Reilly saw – the children malnourished, their home a shambles – stayed with him until the end of his life. 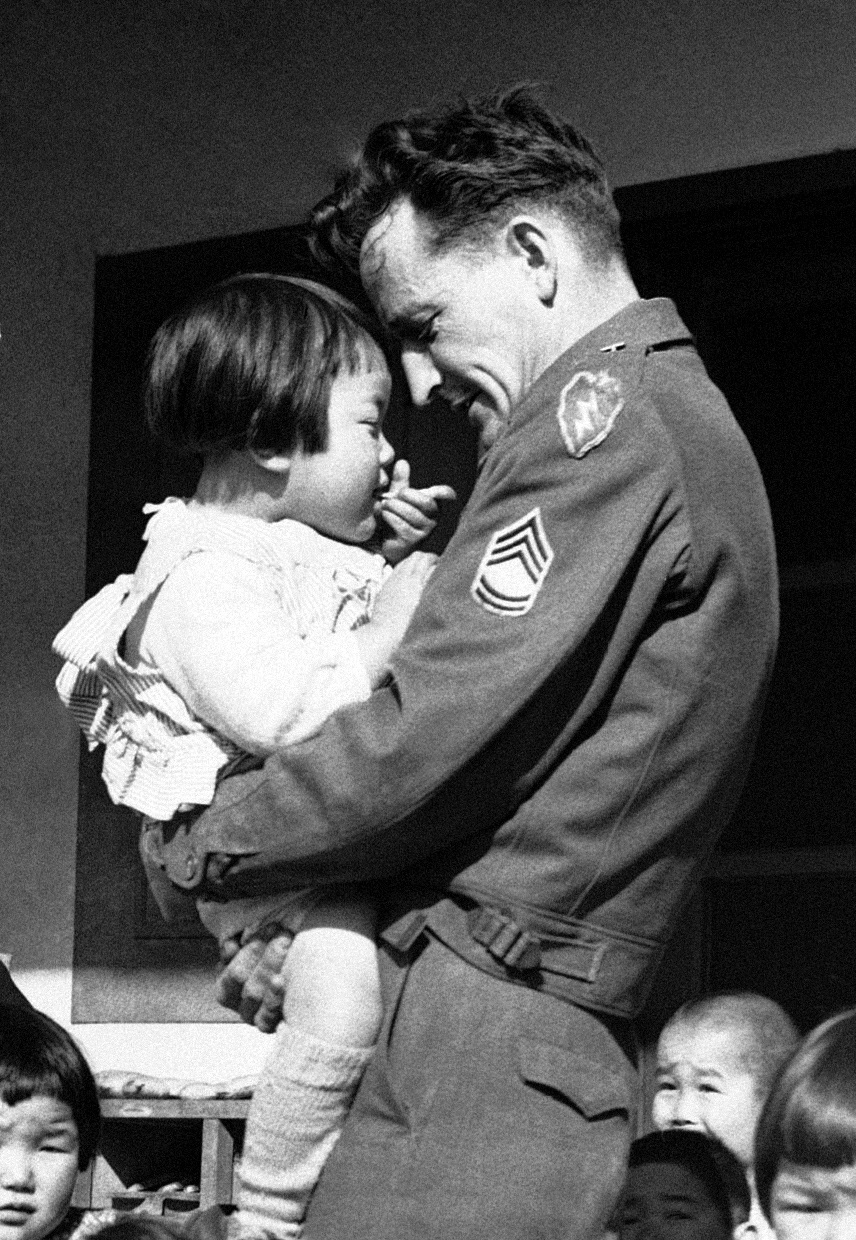 The scene triggered in him an urge to help these children and resulted in a tradition of partnership between his unit – the 27th Infantry Regiment, 25th Infantry Division, nicknamed the “Wolfhounds”  – and the Holy Family Home that has continued for more than 70 years.

The Sisters of Charity of St. Vincent de Paul had established the Holy Family Home in Osaka to care for children of war victims, abandoned and runaway children, and poor women and the elderly. In 1947, in accordance with the Child Welfare Act, it became an orphanage. But as Japan was struggling to recover from the war, there were few resources available to fund orphanages.

O’Reilly was on his third enlistment. Bitter about the former enemy from the Pacific campaign, he didn’t want to go to Japan. But that’s where the Army sent him, assigning him to public affairs in the 27th Infantry as part of the postwar occupation.

That visit to the orphanage was “like a bolt of lightning,” changing the way O’Reilly thought of the Japanese by helping him to see them as human, not just the enemy, according to Drew Meyerowich, who, as a battalion commander in the 27th Infantry Regiment, knew O’Reilly before his death in 2006. 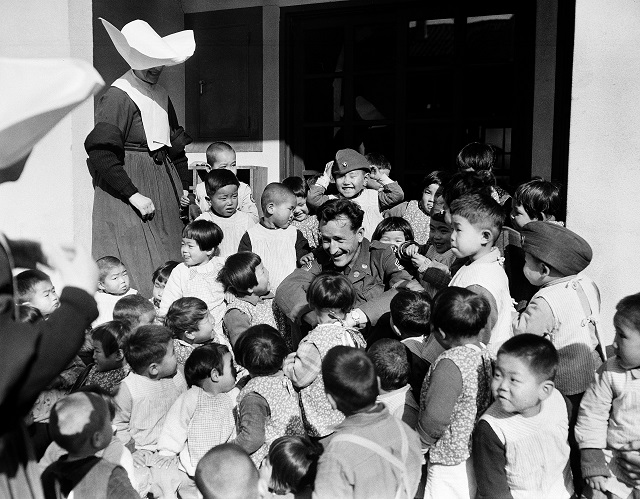 “The most powerful story he used to talk about, these sweet little kids at the orphanage were so malnourished that when you would run your hands through their hair, their hair would crack off in your hands,” Meyerowich recalled. “They would yelp if you squeezed their hand because they were frostbitten. They didn't have shoes. There was no plumbing, no heat.”

Meyerowich recalls being struck by the look in O’Reilly’s eyes when he would talk about the orphanage “and how terrible he felt about this whole idea that they were going to give this big meal to these kids, gifts and everything, and then walk away from it the day after Christmas. And that was sort of the birth of passing the bucket.” On payday, the regiment passed around a hat, and soldiers would toss in a dollar or two, raising $143 dollars the first time, to give to the Holy Family Home on New Year’s morning. This became the routine each payday after. The soldiers also spent their off time helping to build a new home for the children. When the Wolfhounds were deployed to Korea, the regiment continued its support for the orphanage.

After rotating out of the regiment in 1951, O’Reilly told a New Yorker magazine writer, “My parting words to my successor in the public-information job were, ‘Your first responsibility is the orphanage. Then come the Wolfhounds.’”

In 1957, the Wolfhounds began a new tradition, inviting the Holy Family Home to send children each summer to visit Schofield Barracks, in Hawaii, where the Wolfhounds are based. There, they stay with families, sightsee, and enjoy the tropical sunshine. The next year, the regiment also began sending two soldiers to visit the Home as Santa Claus, bringing gifts for the children. “It’s such a special event for the children of Holy Family Home,” said Hisayoshi Agari, the facility’s director. “The Wolfhounds who come to visit spend about 10 days with the children, eating meals together in the living room, going out sightseeing, playing all sorts of games together, and participating in many events. The main event is the Christmas party on December 25 where the Wolfhounds celebrate Christmas together with all of our children and staff.” 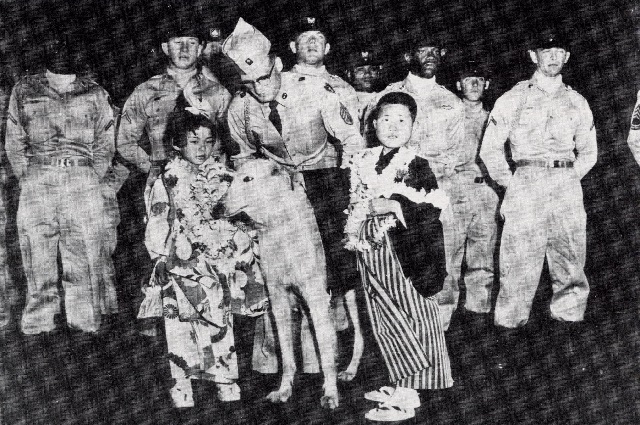 The 27th Infantry Regiment won the nickname the “Wolfhounds” in 1918 when, as part of an Allied Expeditionary Force, they fought Bolsheviks in Siberia. Because of the regiment’s support for the Holy Family Home, however, they came to adopt the nickname the “Gentle Wolfhounds.” Even when they were deployed to war zones, the Wolfhounds continued to support the orphanage. Meyerowich said that it became part of the Wolfhounds’ character to be ruthless in battle but compassionate to innocents caught up in the war.

O’Reilly married an Osaka woman named Yuko Saito and after the war, they moved to the United States, settling in Hawaii, where Hugh and Yuko could be close the Wolfhounds – and ensure that the tradition of supporting the Holy Family Home would continue. As younger soldiers advanced in the regiment and became leaders, they took on that responsibility. Yuko O’Reilly, caring for the soldiers and their families, came to be called “the Mother of the Wolfhounds.”

Since Hugh O’Reilly died, in 2006, a foundation called Peace Bridge has continued to support the orphanage, which today cares for more than 120 children and teenagers. Over the past seven decades, the Wolfhounds have raised 220 million yen for the home, and 177 of its residents have visited Hawaii. Beginning in 2015, a short-term high school foreign language study abroad program was begun. And 116 children from the Holy Family Home have been adopted in the U.S. 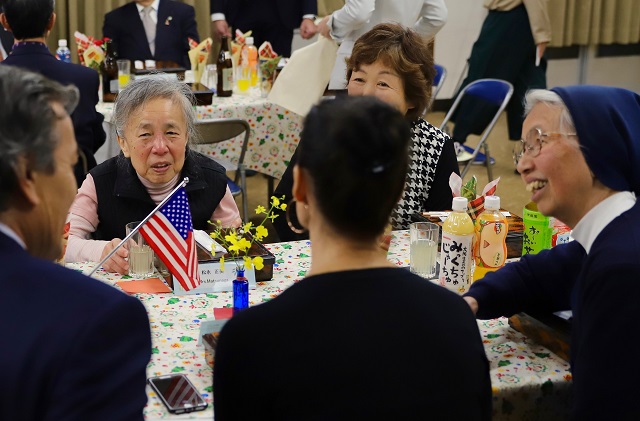 A reception to celebrate the 70th anniversary of the relationship between the Holy Family Home and the Wolfhounds. The woman in the center is the same person as the girl O’Reilly is holding in the first photo above. (December 2019)

According to Osaka Consul General Karen Kelley, the Wolfhounds’ tradition of support to the Holy Family Home has also led to a civilian component. “For the past 50 years, officers and staff from the U.S. Consulate General in Osaka have also lent our support to the Holy Family Home.  Through our annual “Toys for Tots” gifts giving and visits to the Holy Family Home at the year-end holiday season and by including some of the older children from the orphanage in our yearly holiday party for Consulate staff and their family members, we really welcome the opportunity to extend the ties of happiness and goodwill between the Japanese children in Osaka and the Wolfhounds.” 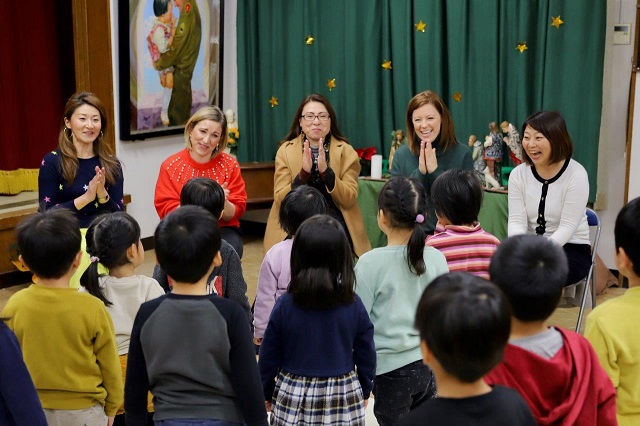 Agari calls the 70-year relationship with the Wolfhounds “a miracle.” As time has gone by and Japan has built one of the world’s most powerful economies, the financial support has become less important, but the visits and other support remain vital. He noted that O’Reilly had said that the regiment helped the children by sending love as well as money to them.