Charlie Nagatani Closing Curtain on Country Gold, but Not on Performing

On the eve of his 20th birthday, Masateru Nagatani was given the gift of a live performance by a country music cover band by a neighborhood friend. The lively twang and soulful lyrics of the western tunes they played set the course for the rest of his life. Sixty-three years later, the owner of Good Time Charlie and mastermind behind the lauded Country Gold Music Festival, Nagatani is a paramount figure in Japan’s country music scene. 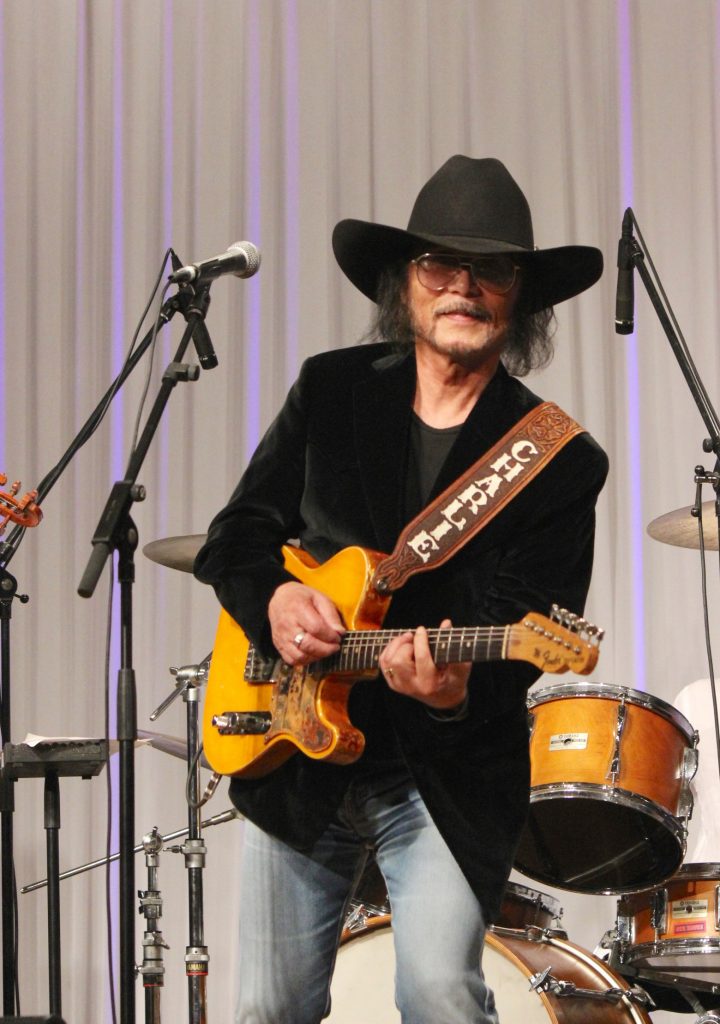 But what prompted him to leave university the day after his birthday and jump on a train with the Hillbilly Jamboree, the band that had performed at his party? Asked this question in an interview with American View, Nagatani pauses, scratches his beard, readjusts his glasses, and hums for a moment before setting his elbow on the table and ticking off three words with his fingers: “simplicity, sincerity, and sadness.” Those three simple words, he says, distinguish the endowments of country music that keep him listening “from morning ‘till night.”

Nagatani’s parents, however, did not feel the same passion. They begged him to abandon his crazy idea and go back to school. But Nagatani would not be swayed. “I swore I’d never quit,” he says. “I’ll keep singing as long as I live.”

He stayed true to his word, and for the next 20 years, Nagatani performed at military bases up and down Japan, in Guam, the Philippines, and Taiwan. It was during those early tours that Nagatani earned the moniker “Charlie” from the servicemen. The name stuck, and when he came back to his hometown of Kumamoto in 1961, he decided to form his own band, Charlie and the Cannonballs.

Since then, 82 members have rotated through Charlie and the Cannonballs, playing 29 performances at the Grand Ole Opry and continuing to spread country music far and wide. “If they have a chance to listen, they will become a fan. I know it!” Charlie says.

His journey to becoming a local legend wasn’t easy though. “It’s hard to eat with country music,” he says, noting that many times throughout his travels he had to rely on his friends to keep going. But “never” he adds, “never did it happen” that he doubted himself. “Only crazy guys will do this, like me.”

His determination paid off. In 1976, he opened a venue called Good Time Charlie, the first strictly country music bar in the city of Kumamoto. It’s a warm and inviting place, covered with so many handwritten letters from his friends, country music memorabilia, and posters of famous country acts signed by the artists that you can barely see the wooden walls underneath. Nagatani has poured his love of American culture not only into his bar, but also to what might be his supreme achievement.

In 1989, Nagatani organized a festival called Country Gold, which drew 8,000 fans to Mount Aso in its first year. Now in its 30th year, Country Gold is the product of Nagatani’s determination to share country music with the people of Japan. “I wanted to do it very American style,” Nagatani says, but it has a distinctive Japanese touch. Vendors sell alcohol, pizza, and steak, but also yakitori and onigiri on the open grass field where attendees lounge on picnic blankets.

By 1998, attendance had swelled to 30,000. Nagatani boasts that despite the alcohol served, there are “no fights, never any trouble, and after everyone has eaten and drank, you imagine, maybe it will be dirty, but no. It is clear! Nobody litters.” Nagatani says he always tells people, even those who are not country fans, “Please come! Please come and see how good it is.” 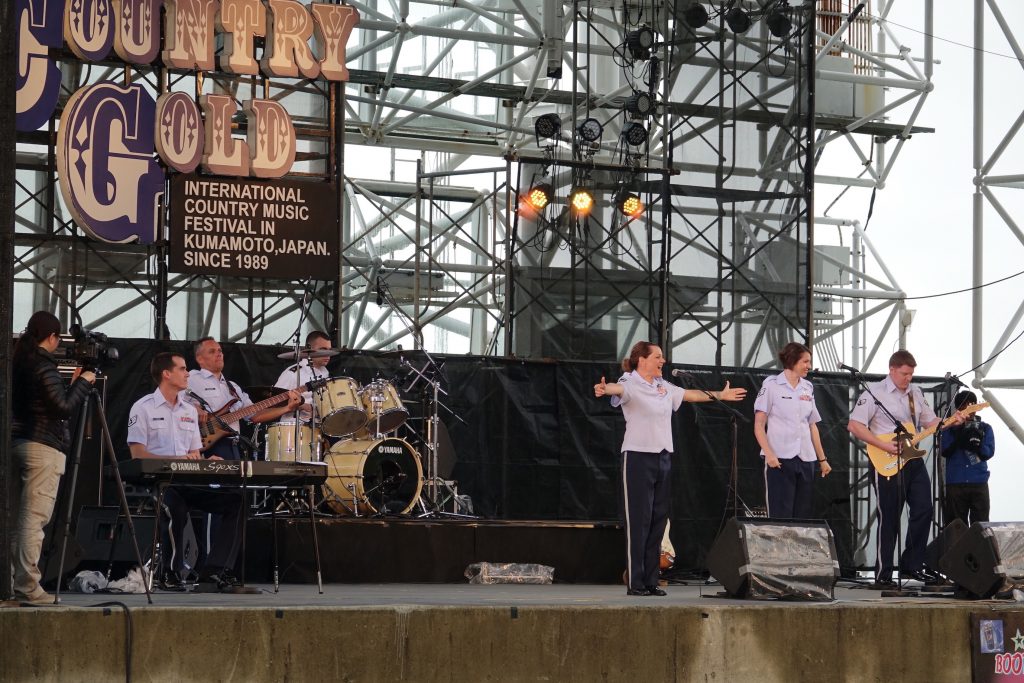 Guests come decked in full western regalia to enjoy not only Nagatani’s music, but also performances by visiting American artists and local country bands. This year’s headliners will be Noel and Ben Haggard (sons of country legend Merle Haggard), Ashley Campbell (daughter of country star Glen Campbell), and the USAF Band of the Pacific, Pacific Trends. In front of the massive outdoor stage overlooking Mount Aso, line dancers in matching outfits will stomp, swing, and shuffle their cowboy boots to the beat of the band. 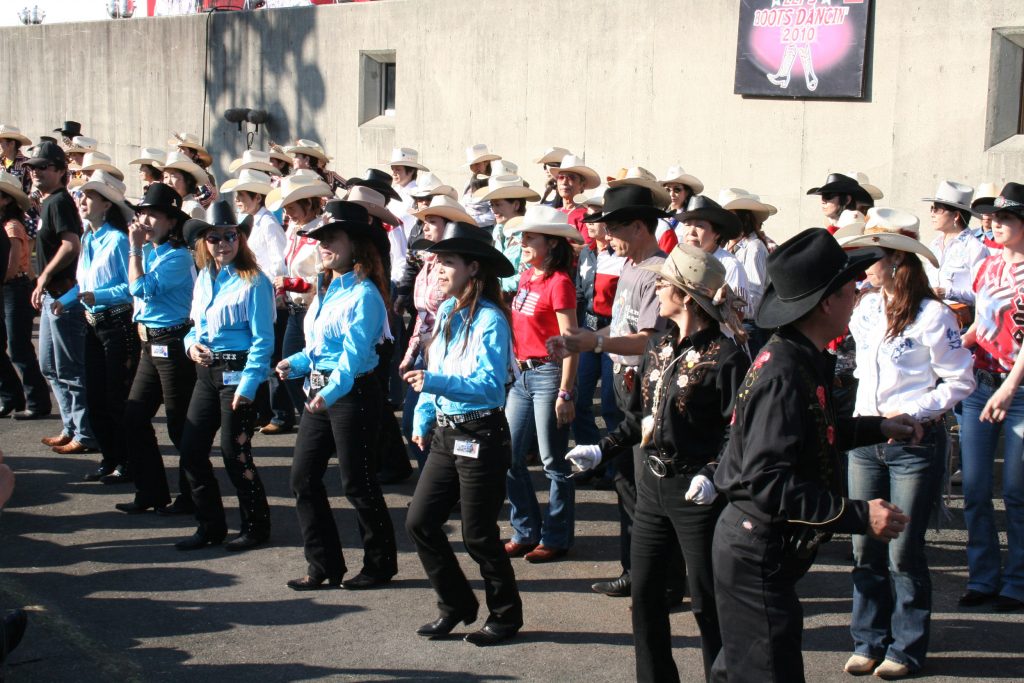 Line dancers perform in front of the stage at Country Gold

It was through line dancing that Toshinori “Robert” Kawashima discovered he was a country music fan. After he retired, Kawashima’s wife suggested social dancing as a way to get some exercise. Now a line dancing veteran, he volunteers to teach the moves. “Since I can’t play,'' he said, “I will spread country music by dancing.”

Kawashima is a regular at Nagatani’s bar, and comes every Saturday night to lead a group of dancers in routines like the Electric Slide, Tush Push, and Copperhead Road.

Nagatani has made friends through country music all over Japan. One is Masaharu Tomimatsu, the frontman of a bluegrass band called Hatchery’s, who also plays the banjo, fiddle, and guitar. Tomimatsu formed the band with some of his high school companions when he returned to his hometown of Kurume, Kyushu, after university.

For 40 years, Hatchery’s has built a following, even travelling to the U.S. to play in the International Bluegrass Music Festival in Kentucky. “We were maybe the first Japanese band that had ever played. It was very exciting and a fantastic time,” he says. Describing how the audience grew as the band played each song at that festival, almost 20 years ago, Tomimatsu beams and claps his hands high in the air to mimic the crowd. “They wanted me to sign their shirts, so I began to write on them in English, but no! They say that they want Japanese kanji,” he says, laughing.

In 2004, Hatchery’s was invited to perform at Nagatani’s Country Gold International Music Festival, and Tomimatsu speaks of the event fondly.

While Tomimatsu is still a regular at Country Gold, Nagatani laments that many of his other friends can’t make it these days. Most players are 70-80 years old and many have passed away. After his 25th show, he says, he almost considered ending it. “But, I decided to do at least 30 shows because there are so few international country music festivals.” 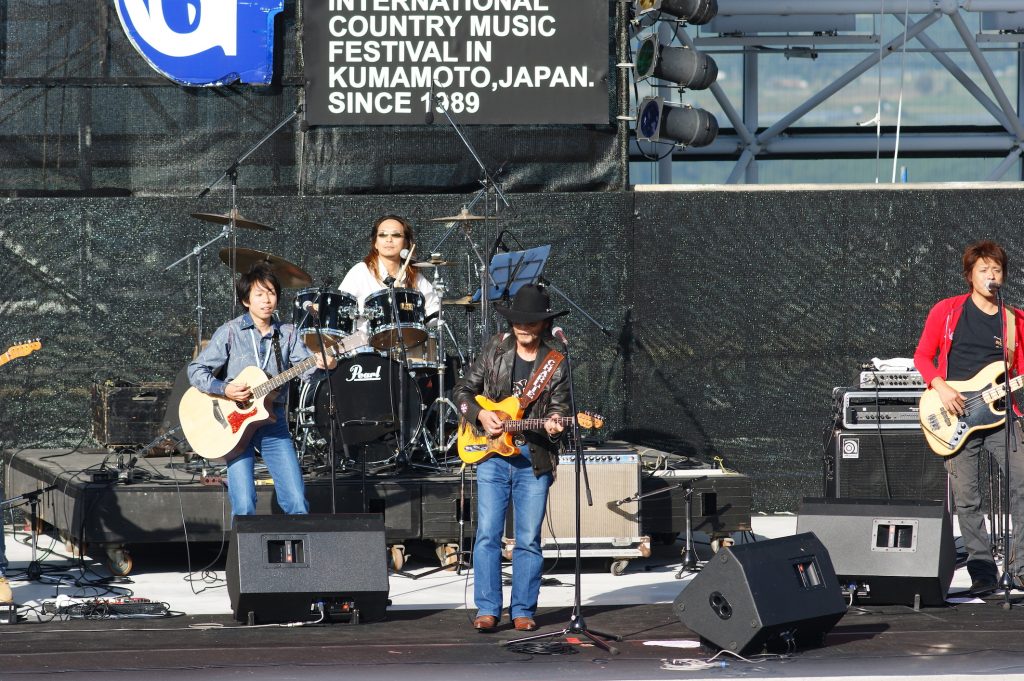 Charlie and the Cannonballs perform at Country Gold

He took it one step further for this year’s Final Encore, which will be the crowning event of three decades of hard work. His efforts, which also helped strengthen the friendship between the American and Japanese people at the grassroots level, earned him the recognition of the America-Japan Society, which named him one of two recipients of this year’s Kaneko Award.

But Nagatani isn’t quite finished yet. Even at 83 years old, he walks with a liveliness that defies his age. Though this is his last Country Gold, Nagatani will continue his legacy with a small indoor music project called Country Sunshine, held in the town hall of Kumamoto. True to his word, Nagatani will keep singing as long as he lives and sharing the real meaning of country music.

Country Gold Final Encore will take place on October 20 at Aspecta, in Mount Aso. Doors open at 9 a.m., and the festival starts at noon. Please click here for more information.