The U.S. Department of State has 275 diplomatic posts that own or lease 3,500 properties in 180 countries. Some of the properties have long histories and fascinating stories. Here are some highlights of America’s diplomatic missions around the world. 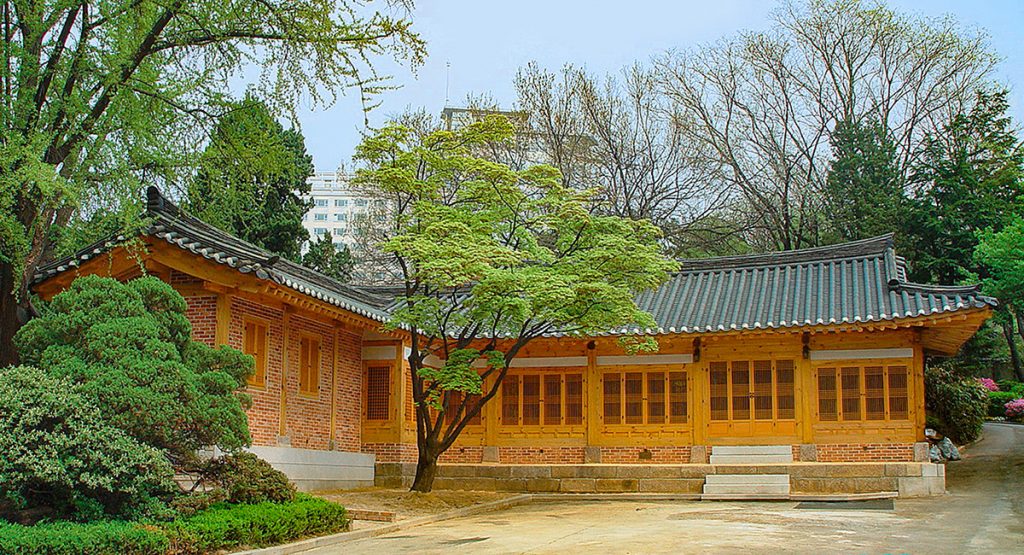 No official residence abroad has been in the possession of the U.S. government longer than this building, used by the first resident American envoy in Korea in the 1880s. Now a guest house for the U.S. Embassy in South Korea, its use of red bricks and glass windows combines Western style with traditional Korean architecture. 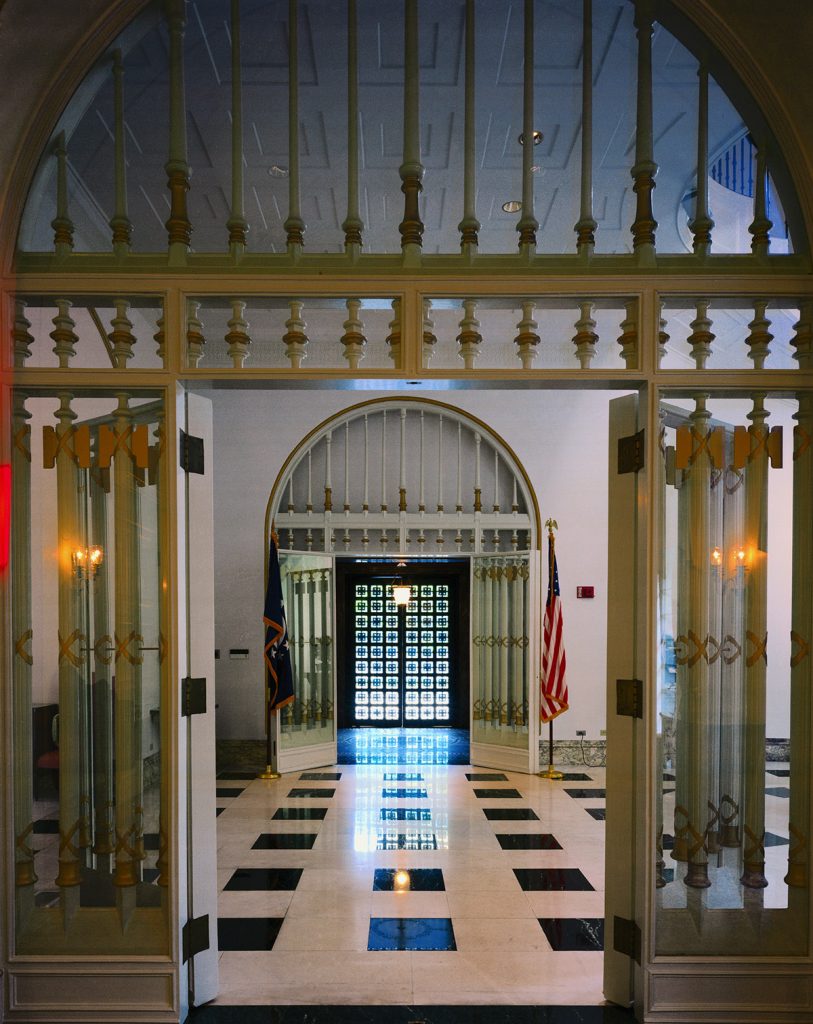 Among the first buildings specifically built by the U.S. as an ambassador’s residence, the spacious rooms and gardens of this home are an oasis in the center of downtown Tokyo. It was here, in 1945, that Emperor Hirohito met with General Douglas MacArthur.

Central to the residence are its monumental bronze doors. The doors — which have welcomed seven U.S. presidents as well as multiple Japanese prime ministers since the early 20th century — were restored in January 2018 to their original luster and functionality. 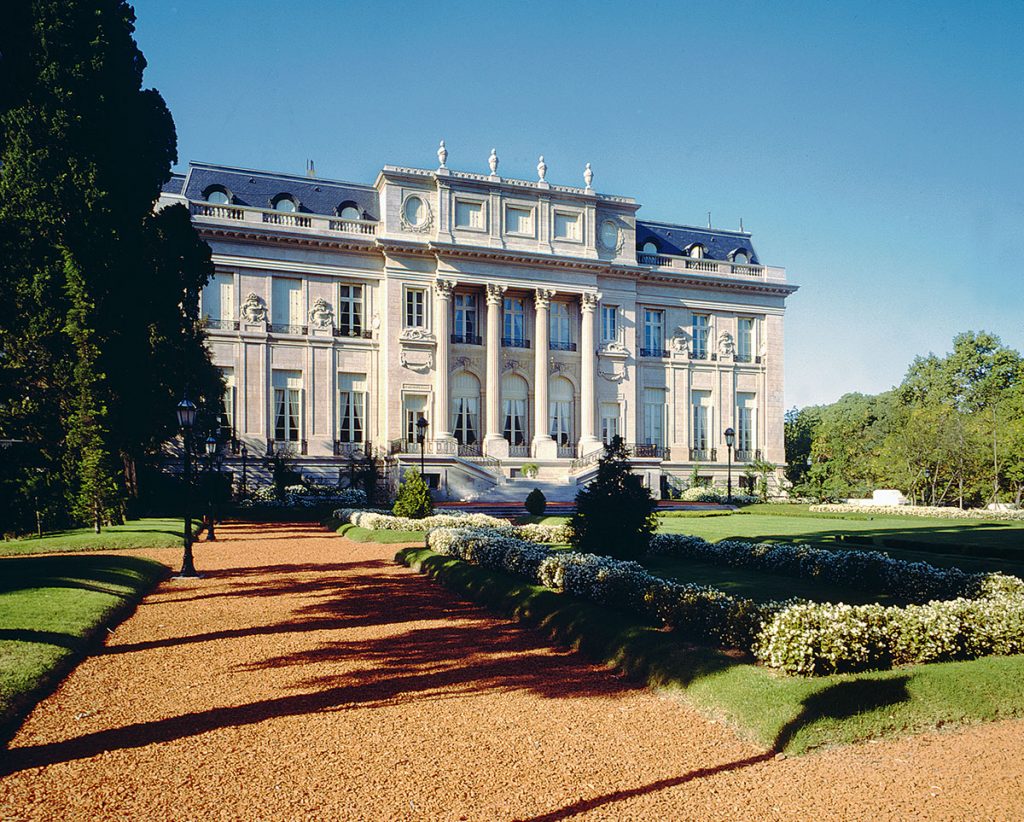 The Palacio Bosch, the U.S. ambassador’s residence in Buenos Aires, Argentina, was originally built between 1912 and 1917 for Argentine foreign minister Ernesto Bosch. Designed by French architect René Sergent, the house was constructed and furnished entirely with materials imported from France. The United States purchased the residence from Bosch in 1929.

A full renovation of the Palacio Bosch began in 1994, using Argentine artisans descended from the original craftsmen. 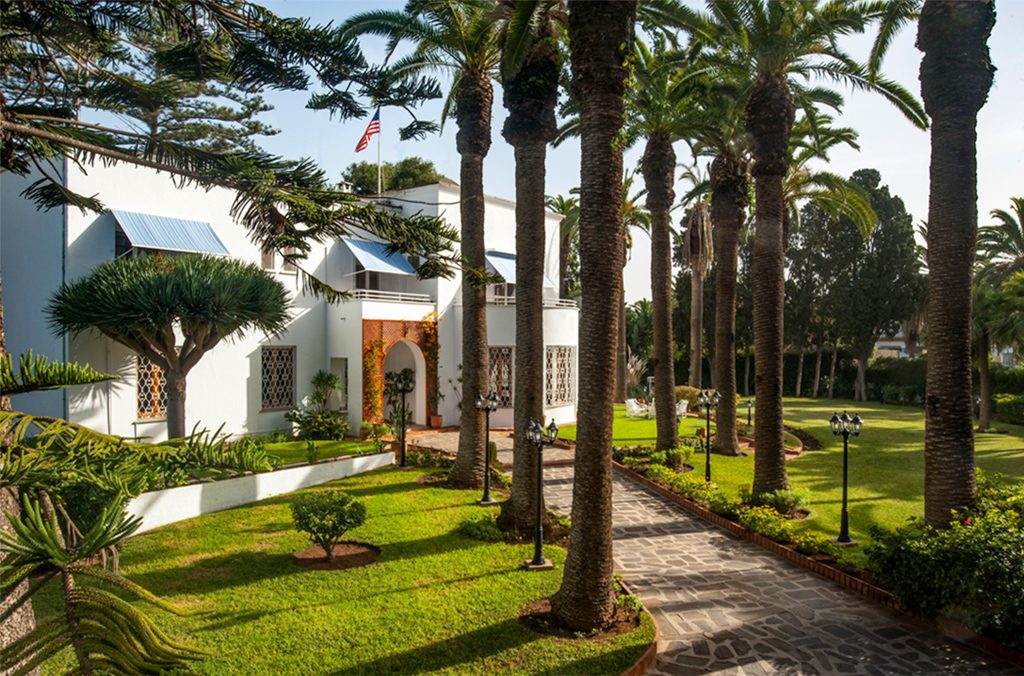 The official residence of the U.S. Consul General in Morocco, the Villa Mirador, was the backdrop to a decisive event of World War II. In January of 1943, U.S. President Franklin Roosevelt and British Prime Minister Winston Churchill met here for the Casablanca Conference. It was at this high-level Allied war meeting that Churchill convinced Roosevelt the Allies should invade Sicily rather than the European mainland — a strategy that proved successful. The picture on the right is where Churchill set up his traveling “war room” filled with maps of all theaters of war.

After the war, the United States purchased Villa Mirador from its original owner. 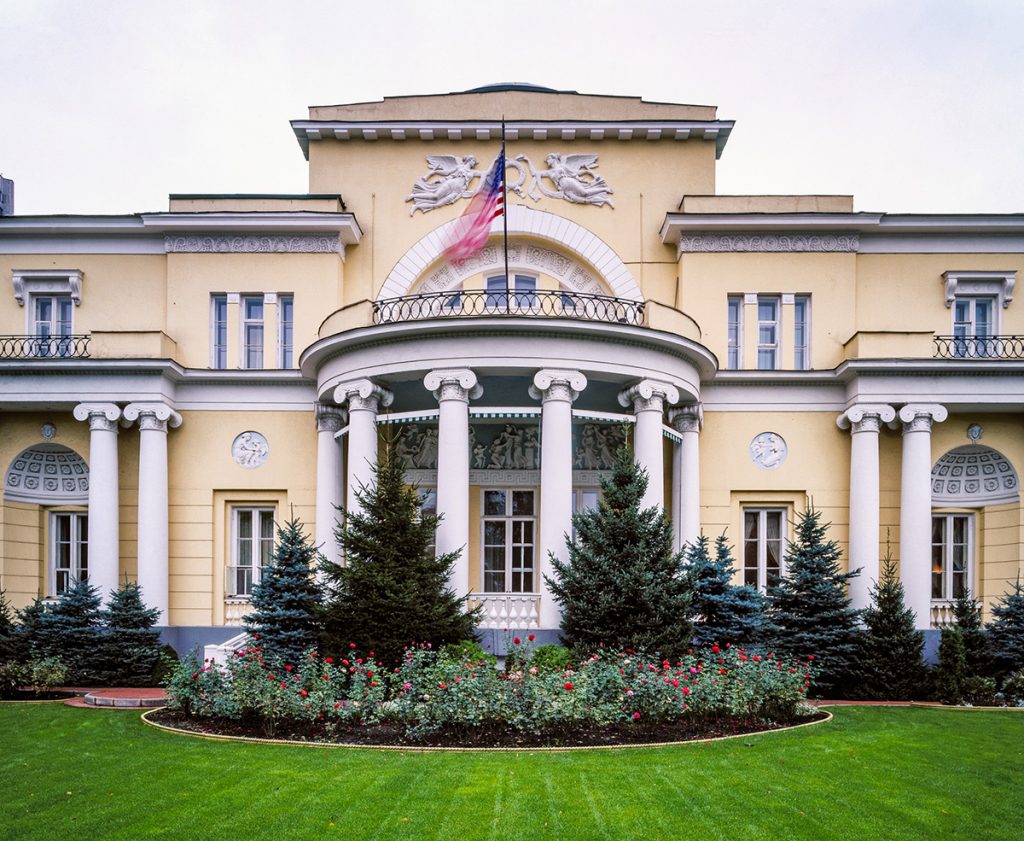 Considered one of the best surviving examples of early 20th-century Russian neoclassicism, Spaso House is the Moscow home of the U.S. ambassador. Acquired by the U.S. in 1933, the residence has hosted a wide range of guests, from musicians and artists to U.S. presidents and Russian heads of state. 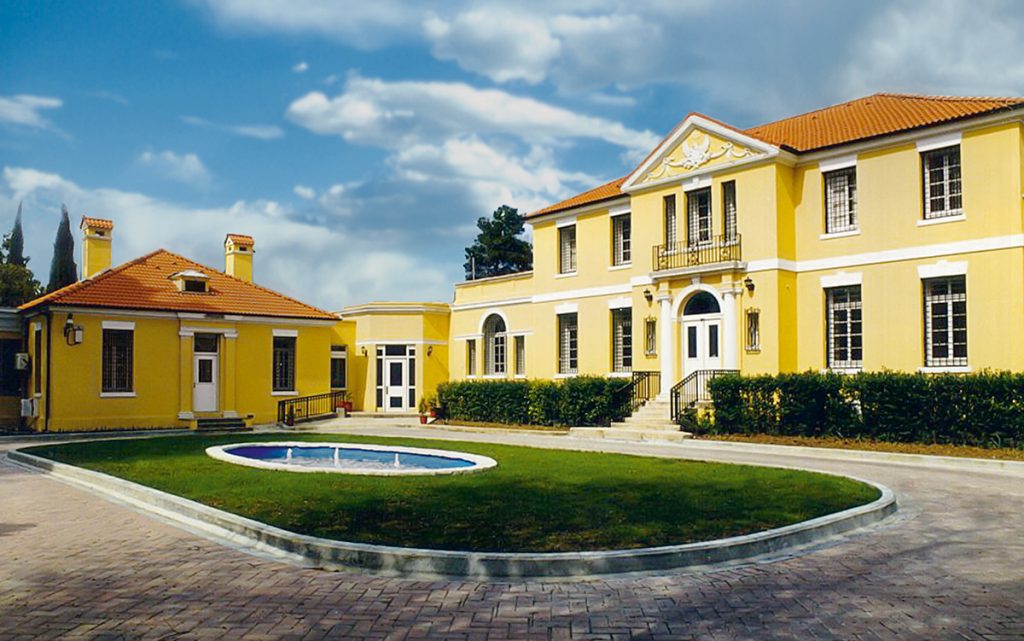 One of the first American legations built by the U.S. government overseas (1929), the embassy in Albania’s capital city recalls 18th-century plantation homes in the U.S., such as George Washington’s Mount Vernon. One of the architects, Nathan Wyeth, also designed the first Oval Office in the White House for President William Howard Taft.

During the Cold War, the property was rented to the Italian ambassador. In 1991, diplomatic relations between Albania and the United States resumed after a break of 52 years, and U.S. Embassy Tirana occupied the buildings again. 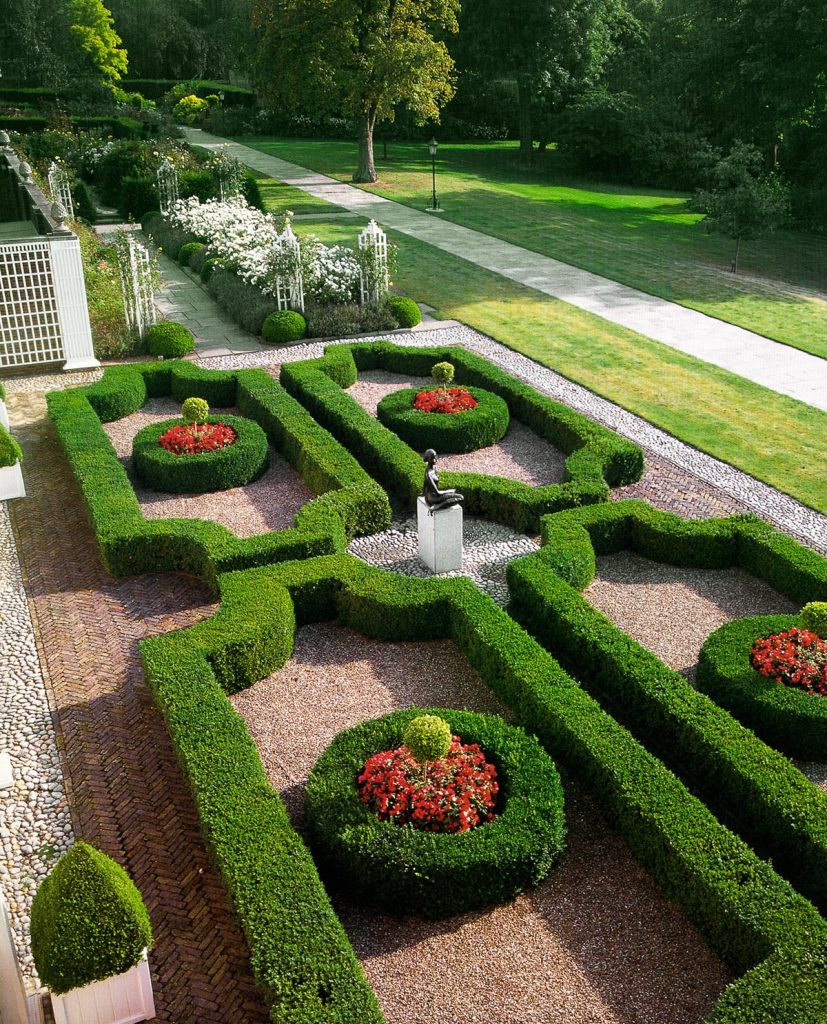 Adjacent to Regent’s Park in London, Winfield House is the residence of the U.S. ambassador to the Court of St. James’s. Its 5-hectare private garden is second only in size to Buckingham Palace’s in the city limits of London.

Winfield House was used as both a Royal Air Force Officers Club and a convalescent home for Canadian servicemen during World War II. 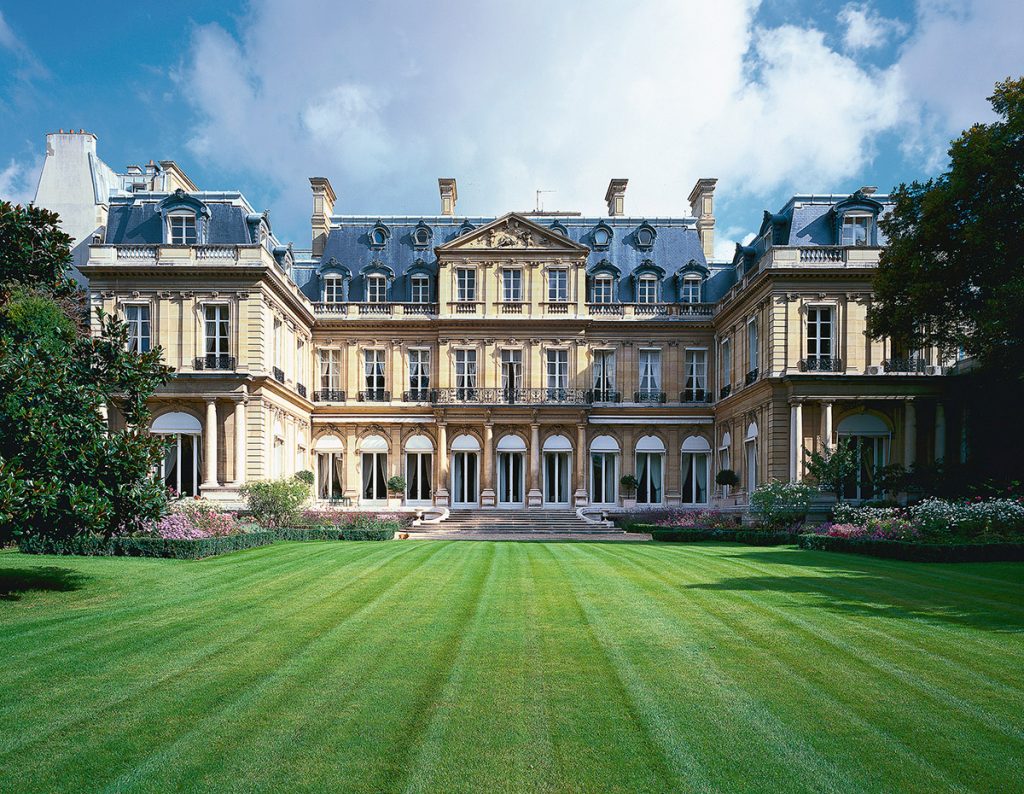 The residence of the U.S. ambassador to France has a history as colorful as its gardens. Built between 1852 and 1855 for Micaela Almonester de Pontalba, a wealthy heiress from New Orleans, the residence was sold by her sons to Edmond de Rothschild of the Rothschild banking empire.

During World War II, the Nazis used it as an officers’ club. Following the war, the United States purchased the property for the U.S. Information Service. It was also one of the buildings used to house people working on the Marshall Plan — the recovery plan for Europe. Restoration of the residence began in 1966 and in the 50 years since, original furnishings have been reacquired both at auction and as gifts of the Rothschild family. 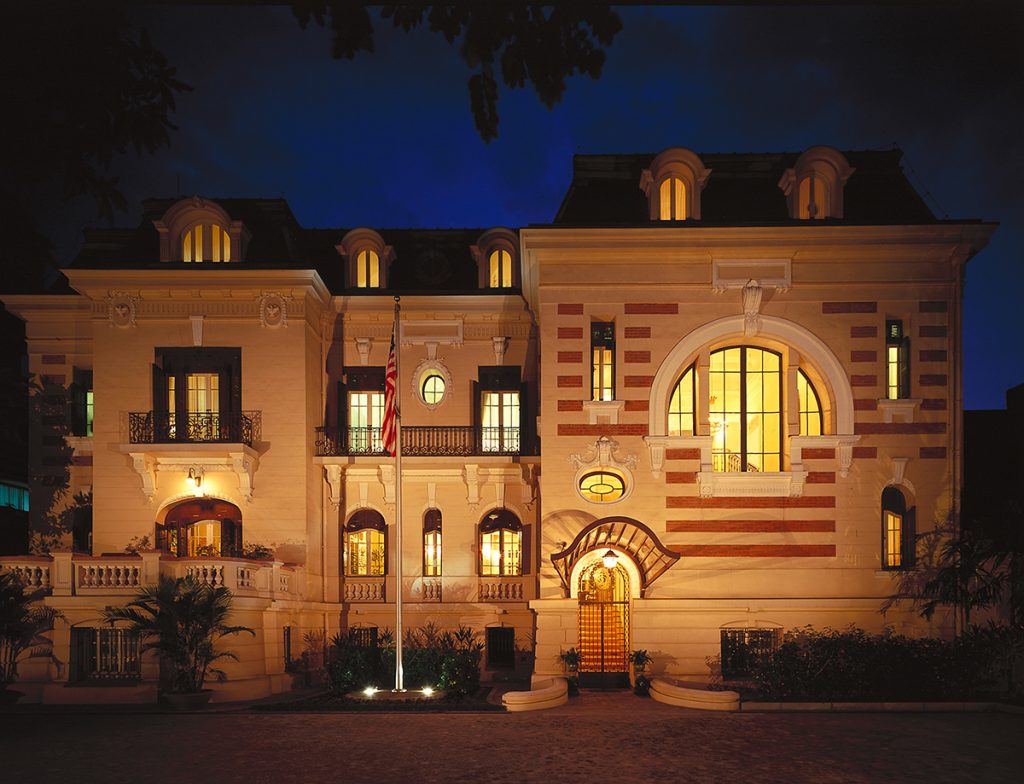 The U.S. ambassador’s residence in Hanoi, Vietnam, dates to 1921 and was built by the French colonial government. After the French left Southeast Asia in 1954, it was used as a residence for Vietnamese government officials and housed the Committee for Foreign Culture Exchange and the Ministry of Foreign Affairs.

When the United States established diplomatic relations with Vietnam in 1995, the residence became home to Douglas “Pete” Peterson, the first U.S. ambassador to Vietnam and a former prisoner of war in Vietnam.

The American Legation in Italy was elevated to an embassy in 1893, and apart from  a three-year interruption during World War II the United States and Italy have maintained diplomatic relations ever since. The U.S. Embassy in Rome was once the home of Queen Margherita, the first queen of Italy. After her death in 1926, the Palazzo Margherita was partitioned into offices for the National Fascist Confederation of Farmers and then purchased by the U.S. government in 1946.