With Liberty and Justice for All: The Advancement of LGBTI Rights in the U.S.

The movement to safeguard the rights of lesbian, gay, bisexual, transgender and intersex (LGBTI) people in the United States is part of a larger U.S. tradition of ensuring minority rights.

That tradition began when President Ulysses S. Grant signed into law the Civil Rights Act of 1871. Now recognized as the world’s first legislation aimed at upholding the rights of an entire class of persons, the statute sought to protect African Americans from attacks by the Ku Klux Klan, a white racist organization.

As industrialization drew more people from rural areas to cities in the early 20th century, LGBTI communities began to form in urban areas across the United States.

In 1962, Illinois became the first U.S. state to decriminalize consensual same-sex conduct between adults in private.

The Stonewall riots of June 27, 1969, marked a turning point in efforts to protect the rights of LGBTI people, expanding a campaign led by a relatively small group of activists into a widespread movement. 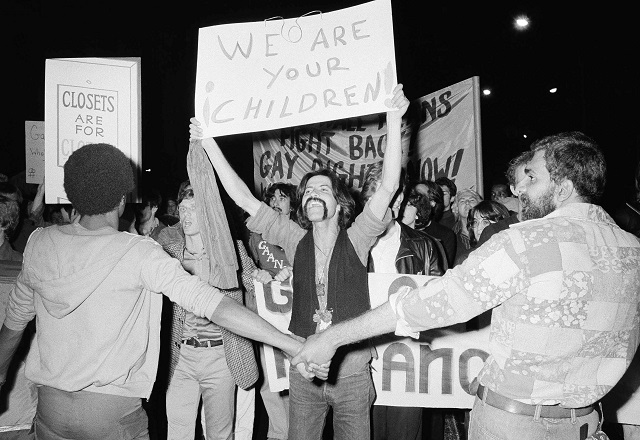 In 1973, the American Psychiatric Association removed homosexuality from its official list of mental disorders. And on October 14, 1979, the National March on Washington for Lesbian and Gay Rights drew some 75,000 gay men, lesbians, bisexuals, transgender people and their heterosexual allies and established LGBTI rights as a national issue.

Over the past 30 years, millions of Americans have come to realize that many of the people they know — their neighbors, colleagues, friends and family members — are LGBTI. This recognition, along with positive portrayals of LGBTI people on American TV and film, has spurred greater social acceptance of LGBTI people and support for their equal rights as U.S. citizens.

Banner image: A man and his elderly mother, who sits beneath an umbrella with a sign that reads "Grandma for Gays," ride past the site of the original Stonewall Inn in New York during the annual Gay and Lesbian Pride Parade on June 25, 1989. Twenty years earlier, the inn was the scene of riots that gave birth to the LGBTI rights movement. (© AP Images)