Betty Reid Soskin of the National Park Service uses her life experience to educate visitors about U.S. history. And she has a lot of experience to draw on — she turned 100 in September.

NPS rangers reflect the diversity of America and its people. “I think everyone’s story is very important,” Soskin told the Washington Post just after her birthday. “There is so much diversity. It’s in that mix that the great secret of a democracy exists.”

Soskin is one of 20,000 active rangers across the country. When the National Park Service was founded in 1916, its employees were nearly all male and white. More than a century later, 37.8% of NPS employees are female and 21.5% are non-white, according to its most recent data.

The granddaughter of a formerly enslaved person, Soskin was born in 1921 into a Cajun-Creole family and grew up in Oakland, California. During World War II, Soskin wanted to be one of the women building boats and airplanes for the war effort — a “Rosie the Riveter” — but couldn’t because of Jim Crow, racial segregation enforced by laws and customs from the end of Reconstruction in 1877 until the mid-20th century. Decades later, Soskin helped plan and get approval for the Rosie the Riveter World War II Home Front National Historical Park in Richmond, California.

Instead of working in a factory or shipyard, Soskin worked in a segregated union hall — Boilermaker’s A-36 — as a file clerk. Today, she adds living history to the national park, sharing her first-person perspective of the men and women who, at the height of the war, made enough boats to launch one each day. 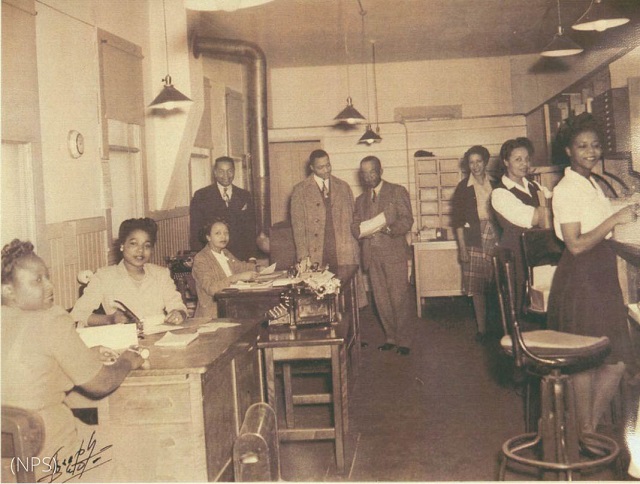 A view of the offices of the auxiliary Boilermakers A-36 Union, a segregated union hall for African American workers in Richmond, California (NPS)

Almost 60 years after starting as a file clerk, Soskin worked with the NPS to uncover the untold stories of African Americans who worked on the home front during the war. This work led to a temporary position with the NPS that, in 2013, turned into a full-time park ranger job.

With that promotion, she became the oldest active park ranger in the United States.

Soskin’s age gives her insight few other NPS rangers possess. She remembers important events from U.S. history, such as Amelia Earhart’s last flight and the attack on Pearl Harbor. She leads public programs at the Richmond Historical Park and tells her own story, in addition to those of other Black WWII workers, at the visitor’s center. 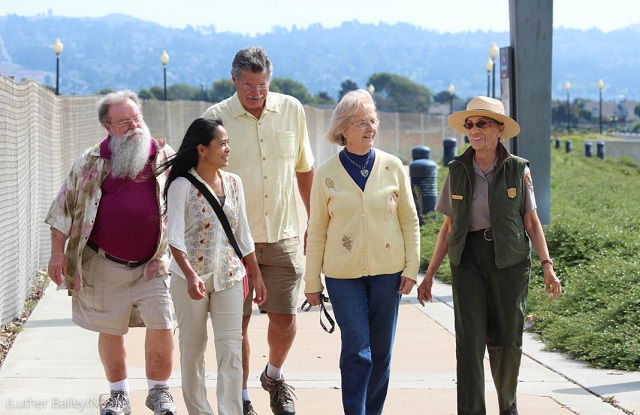 Betty Reid Soskin with visitors, outside of the Rosie the Riveter Visitor Education Center in Richmond, California (Luther Bailey/NPS)

“We have created this incredible system of national parks, where — though they were not designed for the purpose — it is now possible for us to visit almost any era in our history,” she says in the visitor center video. “The heroic places, the contemplative places, the scenic wonders, the shameful places, and the painful places, in order to own that history — own it, that we may process it.”