Rayak in 1959 was a transportation hub where Lebanon’s main rail lines crossed and airplanes flew in and out of a military airport. But the mountain village also had clear skies. It was a place where a 12-year-old boy could see the stars.

And that year, something happened that helped nudge young Charles Elachi onto a path that would lead him to a 45-year career at NASA’s Jet Propulsion Laboratory (JPL), where he would have a hand in exploring the Earth and other planets in our solar system: He received a brochure from the American Embassy in Beirut about science in the United States.

Two years before, the USSR had launched Sputnik I and II, the world’s first artificial satellites, and then in 1958, the U.S. launched Explorer I. The space race was on.

“All of this fascinated me, that gee, we can actually fly things in space,” he said in an interview with American View in October.

Elachi’s father ran the local railway station, but neither of his parents had even a high school education. Still, they encouraged Elachi and his brother and sister to go to college because that would help them to move up in life. Elachi went to a French high school in Lebanon, where he had a teacher who made science fun and interesting, so when he went off to university, it was in Grenoble, France, to study physics and electrical engineering. But he still remembered that brochure about science in America. 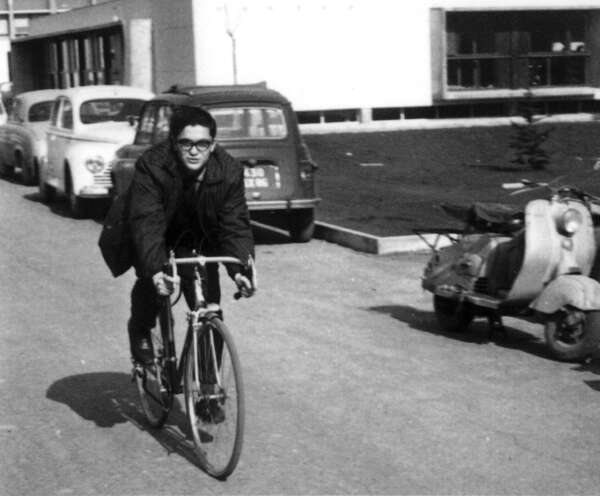 Elachi earned his undergraduate degree in electrical engineering in Grenoble, France, before going to Caltech for his Ph.D.

He paid attention as the space race unfolded during his undergraduate years, and America prepared to send astronauts to the moon, and the first interplanetary probes reached Mars and Venus. As he planned to attend graduate school, one of his professors recommended that he apply to the California Institute of Technology, in Pasadena. Elachi said that Caltech fascinated him not just because it was connected with JPL and the American space program but also because it would bring him closer to stars of a different kind – the ones who live in nearby Hollywood.

Moving to another culture – American culture – was a scary thing, he said, but he found that Americans made him feel at home, even so far from the Middle East. It also helped that at Caltech, half of the students and a substantial percentage of professors are international. He had friends from France, Italy, Hong Kong, Greece, the Czech Republic and other countries who went on to be academics in their own right.

Studying in another country, particularly the United States, "really broadens your life,” he said. With social media and the internet, the world is interconnected, “and getting firsthand experience of people from different countries, different cultures, different backgrounds, I think, is very enriching for your life.”

After earning his Ph.D., Elachi went to work at JPL, the Caltech-managed research center that carries out NASA’S robotic and Earth science missions. While he was still in his 20s, he led a team of other young scientists and engineers that was responsible for an experiment on the Space Shuttle, using radar to do Earth mapping from orbit.

This was his most exciting project because it was his first big leadership opportunity, he said. “In the United States, you can do that. If you are capable and you work hard at it, you can be early in your career, and you can be given very high responsibility.”

The project discovered dry riverbeds hidden beneath the surface of the Egyptian desert, evidence that during the time of the pharaohs, the climate there was much more humid. He followed up the space-based experiment by joining a team of archaeologists to search for those channels. 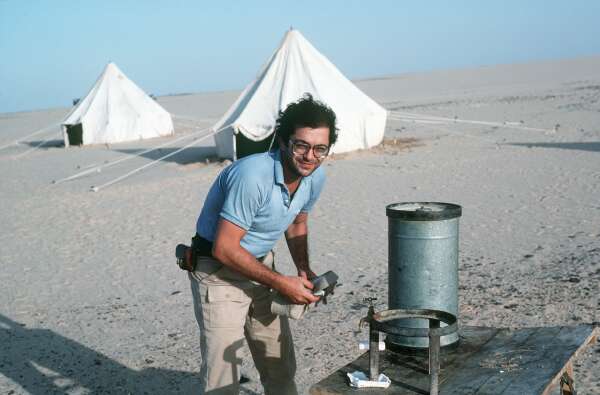 After conducting a space-based mapping experiment from space that discovered ancient underground water channels, Elachi joined archeologists in the Egyptian desert to search for them.

“We don’t think about it very much now, but it really was for the first time that we were able to look at all of our planet almost globally, map things worldwide,” he said. “Now we don’t think about it twice, we go and Google an area, and ask to put in a satellite image, but that did not exist 40 years ago. You couldn’t do that without the space program. Same thing watching the weather. You’re watching all these hurricanes moving. Without the meteorological satellites, you wouldn’t get that perspective.”

He became director of JPL in 2001. During his time there, he had a hand in the Mars Spirit, Opportunity, and Curiosity missions, which sent three rovers to explore the surface of the planet. This led to the most dramatic moment of all of his missions, Elachi said. “You work on these missions for, let’s say, 10 years, and everything depends on that 5 minutes of landing that is occurring. So it adds to the drama of something that’s really difficult, and being able to succeed in doing that makes it more dramatic.” 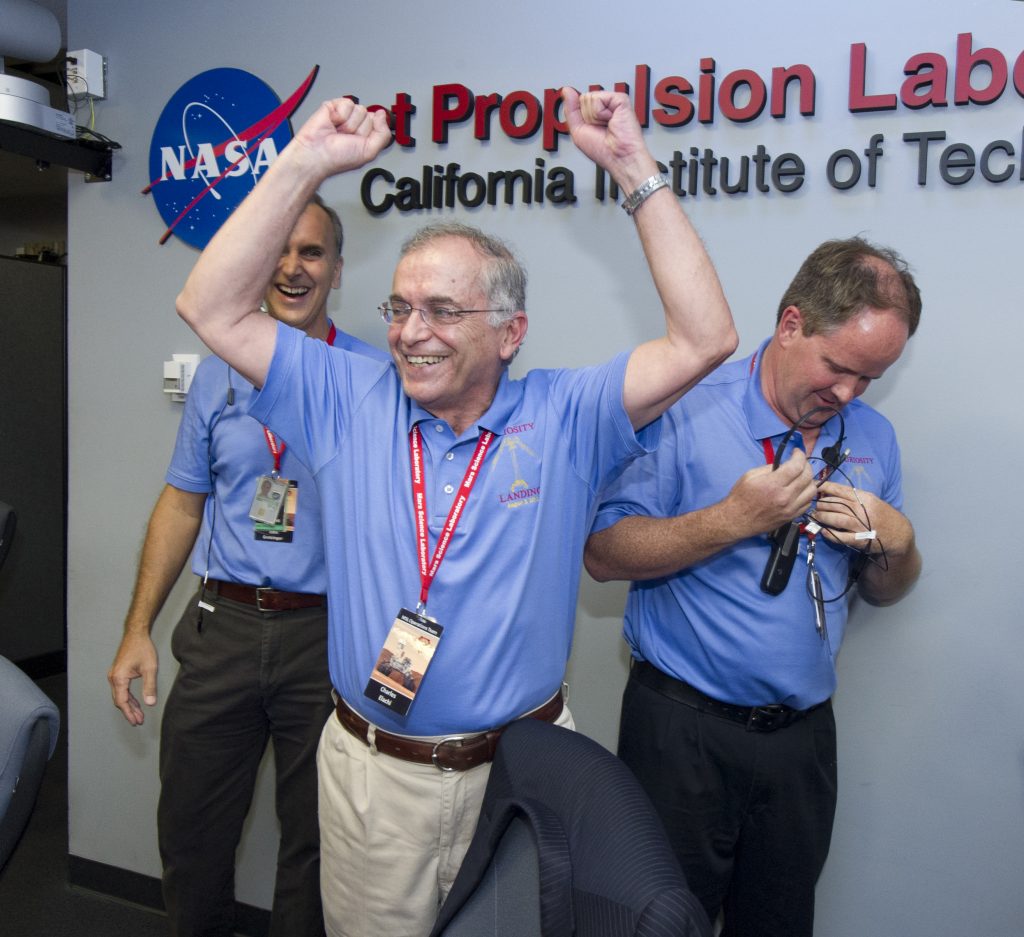 Elachi witnessed the landing of NASA's Curiosity rover on Mars on August 5, 2012 from the Jet Propulsion Laboratory in Pasadena, California.

Elachi retired from his position as director of JPL in 2016 and, after a two-month hiking trip in Canada with his wife, he returned to Caltech as professor emeritus.

Besides working with students, he is working on several research projects, but as a scientist, not an administrator. One of those is an Indian satellite that images surface motion and water resources, and another is a Saudi Arabian project to study water resources in the Middle East.

He also has a hand in the proposed exploration of Jupiter’s moon Europa, which aims to map the satellite’s icy crust, drop a lander, and eventually send a probe to bore through to explore the subsurface ocean.

Each of these endeavors requires that scientists and engineers from different countries work together.

“Even during the Cold War, when we had competition between the United States and Russia, we had collaboration.” he said.  “Space is a forum that brings people together, even when there is tension.”

And so, Charles Elachi continues to explore space and the Earth. 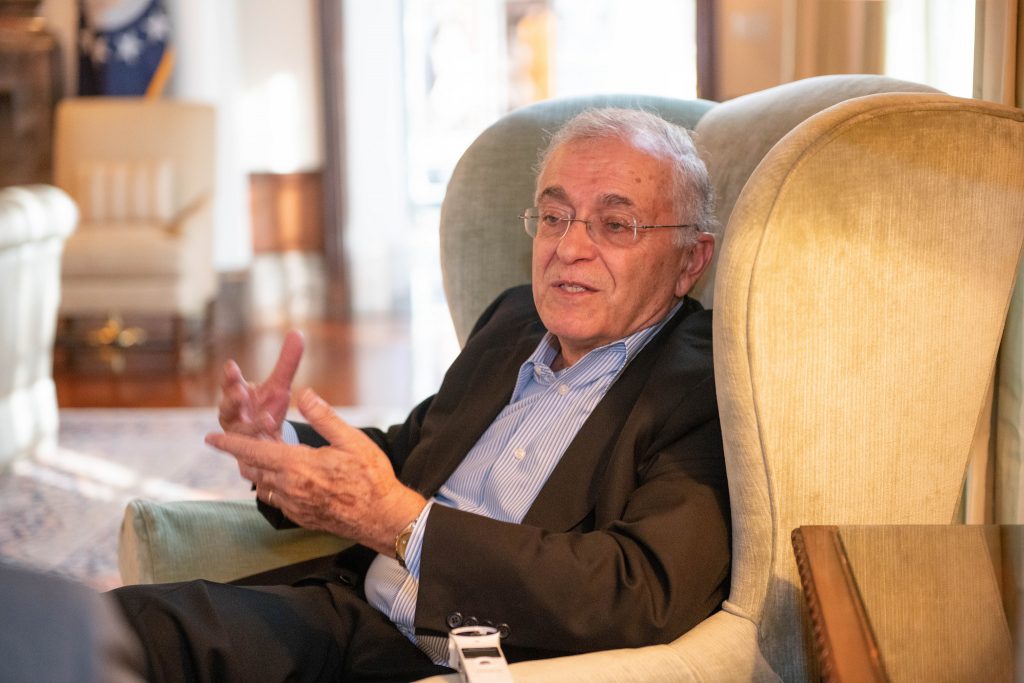 Elachi, photographed in October in Tokyo, is still with Caltech and is working on several experiments. “As humans, we love exploring. That’s kind of in our genes.”

“Exploration is something fascinating to do,” he said. “It could be space exploration, it could be ocean exploration, it could be exploring forests and mountains. As humans, we love exploring. That's kind of in our genes. From when we are kids, we are always exploring: What’s behind this chair? What’s under this table? So always you’re fascinated about learning new things. And we just need to keep nurturing that as we get older. We need to keep that sense of curiosity in us.”