The U.S. Embassy in Tokyo hosted a speaker program on June 15 featuring Dr. Jenna Jambeck, an associate professor in the College of Engineering at the University of Georgia who specializes in global waste management and plastic pollution. The program focused on spreading awareness of marine waste issues and attracted a wide range of participants from environmental experts to schoolchildren who were eager to learn about the impact of ocean debris. In addition to her research on waste management, Jambeck is involved in raising awareness of environmental issues and encouraging young women to enter science, technology, engineering, and mathematics (STEM) disciplines. American View interviewed Jambeck before the program to hear her thoughts on the importance of educating youth on environmental issues.

Jambeck has dedicated her life to solid waste issues, including the impact it has on oceans. She started out by focusing on land issues, but has always had a fascination with the ocean. For Jambeck, the human component of solid waste management (SWM) hit close to home. “I’ve always been fascinated by why we do what we do,” Jambeck stated. “Our choices, what we choose to buy and consume, influence the waste generated.” Jambeck describes herself as “a trash person, but really a people person, because people are so close to this issue. People have the power to make choices that make differences.” 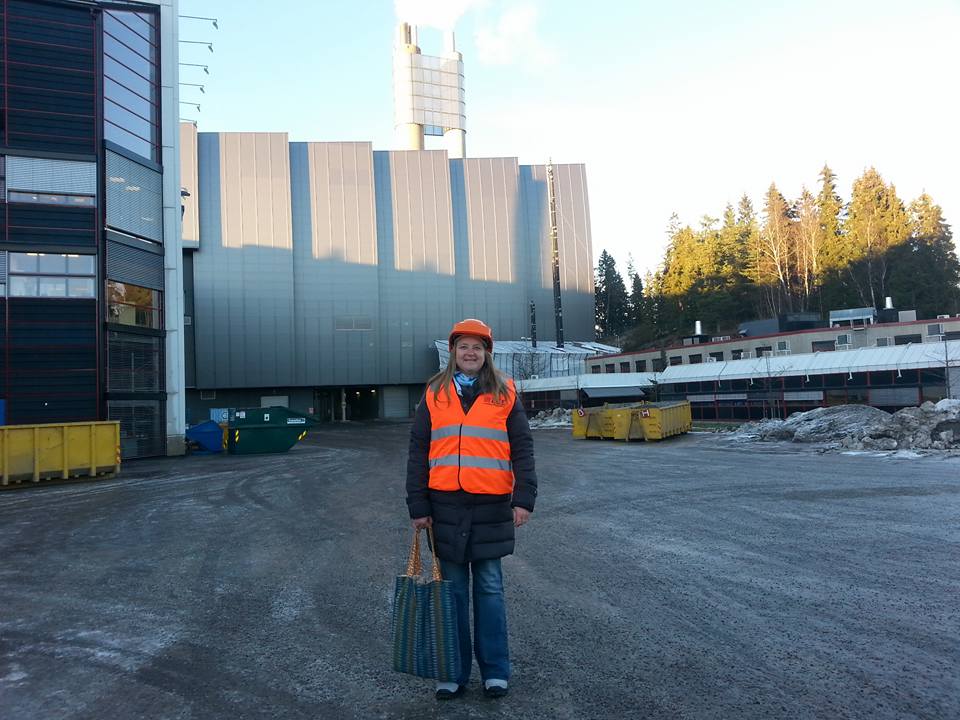 Encouraging youth around the world

When talking about how to encourage young people to pursue careers in science, Jambeck explained that “mentors are important.” She went on to say that the biggest mentor in her youth was a fictional character in Madeleine L’Engle’s A Wrinkle in Time. “The kids in the story see their mom working in her laboratory, making stew over a Bunsen burner.” Jambeck recalled, “I thought, ‘Wow, being a mom and doing science at the same time!’” This gave her the motivation to pursue a career in science while raising a family.

Jambeck believes that outdoor activities are the perfect way to learn about the environment. “Follow those rabbit holes; let your curiosity take you on adventures,” she stressed. “It’s about being curious about how the world works and how you can help.”

During a question-and-answer session after the speaker program, Jambeck was asked by a high school student about ways to educate youth on waste issues. Jambeck proposed that one method is to draw real-life connections. “If waste ends up in our environment, it affects us. Show that connection,” she said.

Jambeck is particularly interested in encouraging young women to enter STEM fields and hopes that there will come a day when it is normal and typical for women to work in such disciplines. She explained in the interview that persistence and perseverance have contributed greatly to her success. Although engineering and math did not come easy to Jambeck at first, she pushed through with hard work. “A lot of us expect to be really good at something right away,” she said, “Some women think, ‘I’m not as good as someone else.’ That’s okay. You can still take it really far.”

When a U.C. Berkeley student asked Jambeck what made her decide to major in a STEM field, Jambeck explained that she fell in love with SWM. She said that while she tends to be the only woman in most meetings, it is important to be “as visible as possible,” emphasizing that it is important to show other women what you are doing to encourage them. “Everyone has challenges to face and hard work will help you through them,” she added.

Giving power to the people

In addition to encouraging students to pursue STEM fields, Jambeck co-developed a mobile app called Marine Debris Tracker (MDT), which allows people to report litter anywhere in the world. They can also report when they pick up the litter, allowing for competition among users. Jambeck and her team use the data from the app for upstream solutions. The app can also be used to educate youth around the world. Jambeck explained that through the app, “citizens can be scientists.”

A junior high school teacher who educates her students on environmental issues attended Jambeck’s program and asked for advice on how to make the lessons more engaging. In response, Jambeck explained how MDT can be used in the classroom to encourage students. 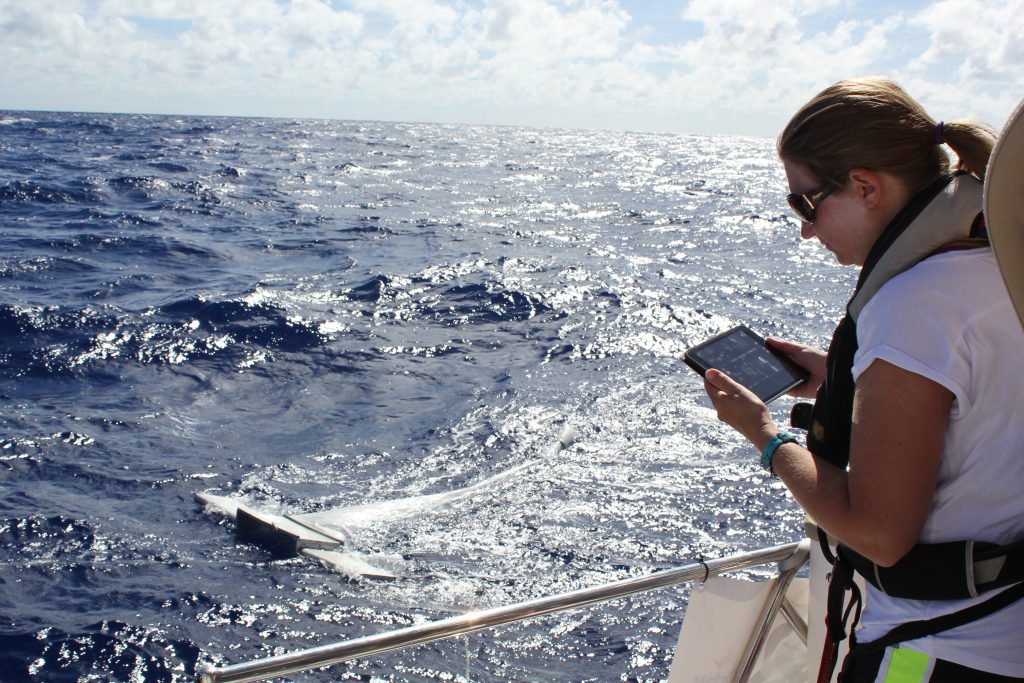 In 2014, Jambeck’s life was changed forever when she had an opportunity to join 13 women on a sailing expedition across the Atlantic Ocean. It all started when Jambeck received an alert saying that MDT had been mentioned at Apple’s World Wide Developer Conference in a promotional video called “Apps We Can’t Live Without.” In the video, which featured people talking about apps that are essential to their lives, environmentalist Emily Penn mentioned MDT. “It was really touching,” Jambeck said.

Jambeck got in touch with Penn and found out about her “eXXpedition” program in which groups of women go on sailing voyages to raise awareness of environmental issues. Six weeks before the trip was scheduled to start, she received an email from Penn saying: “There’s a spot open. Do you want it?” Jambeck forwarded the email to her husband as a joke and he replied instantly: “You have to go.” Jambeck said, “I had this chain of command to go through and everyone said yes. It was like the universe opened the door and shoved me out.”

Jambeck is a strong advocate of eXXpedition’s mission of “Making the Unseen Seen” because it can help make people more aware of waste issues and “can lead to a cleaner, healthier future and inspire women to do things outside of the box.” 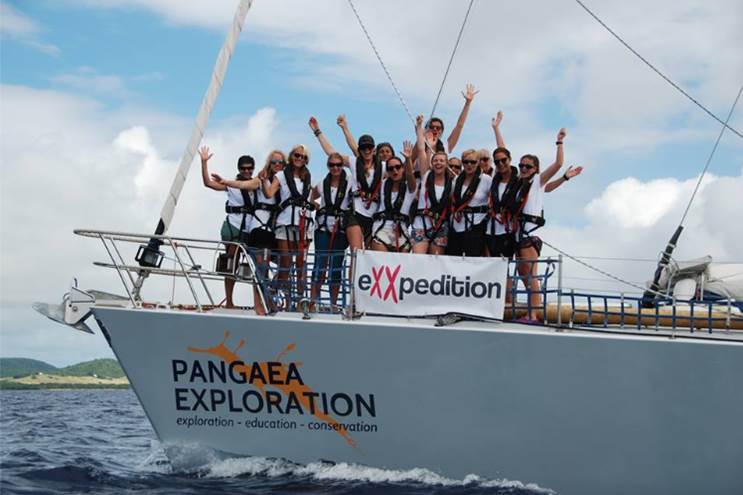 Collaborating for our future

In addition to visiting Japan, Jambeck traveled to other countries in Asia through the State Department-sponsored program to share ideas on reducing ocean plastic with youth. At her speaking engagements, she showed clips from her time with eXXpedition to demonstrate how people can get involved. She believes that when people see someone making a difference, they become motivated to do the same. Jambeck was pleased with the positive reactions that the videos received.

“I was honored to be asked and excited to meet people,” said Jambeck. She was particularly impressed that the majority of people in Indonesia and the Philippines involved in SWM are women. “I loved it,” Jambeck exclaimed. “That doesn’t happen in the U.S. at all. Usually my world of SWM folks is all men.” Jambeck expressed her appreciation for the program as it gave her an opportunity to promote women in STEM fields and facilitate information exchange on marine waste issues.