Once a year, Jewish children all over the world play a game of chance called “dreidel” that uses four-sided spinning tops inscribed with Hebrew letters. The game is played during Hanukkah and commemorates a miraculous event that took place over 2,000 years ago in Jerusalem.

The game, like Hanukkah itself, recalls the victory of a small band of determined Jewish fighters, led by Judah Maccabee, over an army of invaders. After driving their enemies from the city of Jerusalem, the Jews were then able to rededicate their holy temple by lighting its menorah — a branched candelabrum. 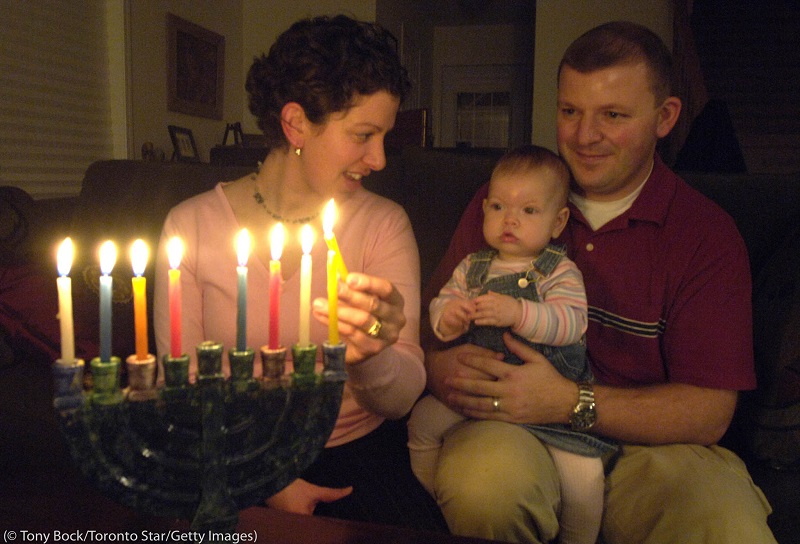 A family lights a menorah, one candle represents each night of Hanukkah. (© Tony Bock/Toronto Star/Getty Images)

According to tradition, the Jewish faithful could find only a one-day supply of ceremonial oil to light the menorah, yet the flames lasted for eight days until they could produce more. This was viewed as a miracle, and to this day Jews memorialize the event by lighting the menorah in their homes, saying special prayers, singing songs and preparing traditional meals.

Celebrants often prepare fried foods as a symbol of the legend of the oil that lasted eight days — especially latkes (potato pancakes) and sufganya, a jelly-filled doughnut.

Across the United States, synagogues hold latke dinners and retell the story of Hanukkah. And on the grounds of the White House in Washington each year, the National Menorah Lighting Ceremony includes musical performances, hot latkes and doughnuts.

Worldwide, Hanukkah is a joyful custom that calls on the faithful to remember and celebrate a miraculous occurrence in Jewish history. The holiday is not one of the High Holy Days in the Jewish calendar marked by self-reflection and atonement: Rosh Hashana (Jewish New Year) and Yom Kippur (Day of Atonement).

A version of this story was originally published on December 13, 2017.