The all-female spacewalk will be supported by a female ground crew: Mary Lawrence will serve as lead flight director and Jackie Kagey will be lead spacewalk flight controller at NASA’s Johnson Space Center in Houston.

It’s a fitting milestone for Women’s History Month, although NASA says the timing is coincidental.

Both McClain and Koch were part of NASA’s 2013 astronaut class, which was 50 percent female. While women make up a growing number of astronauts, they’re still underrepresented in the field of space travel — for now.

McClain, a major in the U.S. Army, was a helicopter pilot who flew combat missions for many years. “I was blessed to have parents who never put qualifiers on what I could do,” she said in a U.S. Army video posted on her Twitter account.

Working for NASA, McClain said, “we don’t do the same thing any two days” in a row.

Koch, like McClain, has undergraduate and advanced degrees in engineering. 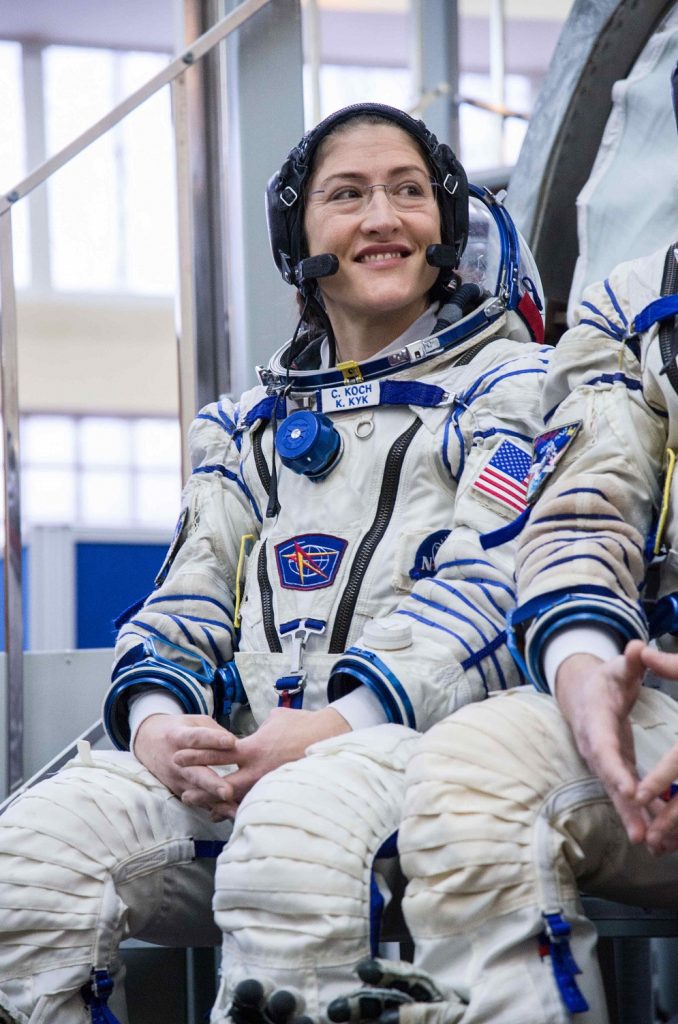 Christina Koch listens to questions before her flight to the International Space Station. (Beth Weissinger/NASA)

She began developing space-science instruments at NASA, and later worked in Antarctica for a year, conducting experiments and helping with research.

Her experience in Antarctica proved valuable, she said, because there are many parallels to the work done by astronauts, in terms of “the harshness of the environment and the mental and physical … fortitude it takes to be successful” there.

The March 29 spacewalk will last about seven hours, according to NASA.

UPDATE: NASA astronauts Anne McClain and Nick Hague conducted the first in this series of spacewalks on March 22 . Although Christina Koch had been scheduled to conduct the next spacewalk with McClain, in what would have been the first all-female spacewalk, mission managers decided to adjust the assignments due in part to spacesuit availability on the station. Koch conducted the second spacewalk with Hague on March 29. But an all-female spacewalk is "inevitable," wrote NASA in an article posted on its website on March 28. "As the percentage of women who have become astronauts increases, we look forward to celebrating the first spacewalk performed by two women! McClain, Koch (and Hague!) are all part of the first astronaut class that was 50 percent women, and five of the 11 members of the 2017 astronaut candidate class are also women."