Tohoku and Fukushima: A Story of Collaboration in Rescue Robotics

By Dr. Robin Murphy, Director of the Center for Robot-Assisted Search and Rescue, Texas A&M University

When I talk about the use of rescue robots in Japan for the triple disasters of the Tohoku earthquake and tsunami and the Fukushima nuclear emergency, people always seem astounded by two facts. The first is that rescue robots had been used in only 25 disasters before the Tohoku earthquake because it is a very new and difficult field. The second is that the U.S. and Japan worked together at all levels − scientists, industries, embassies, defense departments − to get robots involved.

The field of rescue robotics was created by researchers in Japan and the U.S. in response to the dire events of 1995: the Hanshin earthquake and Oklahoma City bombing. These disasters came at a time when robots were becoming mobile − no longer fixed to the factory floor. It was apparent that these mobile creatures eventually could be used to penetrate deep in the rubble where responders could not see or to quickly lift huge chunks of debris blocking the way. The IRS-CRASAR team with the Japanese Coast Guard.

Although very few rescue teams have robots, the U.S. and Japan basic research communities, both individually and cooperatively, have been very active in rescue robotics research. Dr. Satoshi Tadokoro of Tohoku University and I began collaborating in 1998 and he started the International Rescue System Institute (IRS) in Japan in 2002 shortly after the Center for Robot-Assisted Search and Rescue (CRASAR) was founded in the U.S.

We had just finished a productive week of working at Disaster City with IRS successfully testing Quince’s improved mobility in different rubble piles and tunnels (which would be of help in their later deployment at Fukushima). We finished with a celebratory party at a nearby ranch where everyone got to ride horses before leaving the next morning. At 3 a.m., I was awakened by a phone call, which fumbling, I missed. I saw it was Dr. Tadokoro and tried to call back. I got a busy signal and assumed he had called me by mistake. When I got up at 5:30 and saw that I had also missed an earthquake alert, I rushed to my laptop and saw the tragedy. Quince being tested at Disaster City

Based on the pictures in the media and our experiences with different types of robots at Hurricanes Charley, Ike, Katrina, and Wilma, we didn’t think ground robots would be needed. The real need was for marine robots, either robot boats or underwater robots that could carry sonars capable of seeing through murky water. The marine robots would be unlikely to help with saving lives, but they could help with economic recovery: determining the status of the underwater portions of bridges, ports, and seawalls; whether there was debris in shipping channels and ports; and if there were leaks of fuel or hazardous materials from marinas and industry. We recommended ROVs because they can be operated from the shore (solving the lack of boats in the area) and are better for inspecting bridges. Although there were distributors in Japan for ROVs, disaster or transportation agencies generally do not know about their capabilities. So, by going to Japan and assisting IRS we could both provide humanitarian assistance and improve awareness of these technologies while, of course, collecting scientific data about robotics.

IRS members, now back in Japan, agreed with our assessment and immediately began approaching officials at all levels of government from Tokyo to the northern prefectures to understand their needs and to offer these unique robots at no cost to them if they were skeptical about how they worked and did not want to contract with a distributor.

At the same time Dr. Eric Steimle, the CRASAR marine robot lead, called ROV and AUV manufacturers that had worked with CRASAR over the years. Every company, with one exception, enthusiastically signed our Roboticists Without Borders agreement. They agreed to donate equipment (including not demanding payment if it was lost or damaged) and up to 10 days of personnel time, as well as to share all data. CRASAR would pay for travel using reserves from donations and research overhead. I joined the Westinghouse team in Tokyo from March 28 to April 2 to share my model of human-robot interaction in UAVs. Westinghouse had chosen the Honeywell T-Hawk, a small UAV that looks like a miniature beer keg. The T-Hawk flies like a helicopter but the rotating parts are protected inside the “barrel,” which is an advantage for working close to buildings where a gust of wind may bump the UAV into a wall.

Although the exact data has not been released by TEPCO, the Honeywell T-Hawks flew over 40 missions from April to June plus assisted TEPCO and authorities with operations in the surrounding areas outside the facility. The T-Hawk was able to allow the nuclear engineers to see in real time into the reactor buildings from angles that an overhead satellite or plane could not see. The videos were very useful in determining the condition and structural integrity of the reactor buildings, but probably the most valuable data was from the radiological sensor mounted on the T-Hawk. It gathered data as the robot flew at low altitudes and next to the reactors, and the data was then assembled into highly accurate maps. The T-Hawk actually hovered in a plume rising from one of the reactors, providing direct sampling. An island of flotsam that divers could not inspect.

We arrived at Narita on April 17. The Port of Hachinohe had been cleared manually but two smaller municipalities, Minamisanriku and Rikuzentakata, had issued formal invitations. The team consisted of Dr. Matsuno with Dr. Tetsuya Kimura, Mr. Kenichi Makabe (a professional firefighter) and two grad students from IRS, and Dr. Steimle, Mr. Jesse Rodocker, Ms. Karen Dreger, and me from CRASAR.

Our first stop was Minamisanriku, which was eager to restart its fishing industry. We searched their port with two ROVs and within four hours of time in the water, we had searched the port and declared it safe for entry by fishing vessels. That earned us a moving thank you from Mayor Sato. The key to the ROVs’ success was the use of imaging sonars to sense even thin nets and ropes in the murky water from meters away. Once spotted, the ROV would drive closer and use the camera to confirm what we were looking at. Sometimes the water was so murky, the ROVs could not see more than half a meter ahead.

Our final five stops were in Rikuzentakata where we had two surprises. The first was that we were tasked with victim recovery rather than port inspection. We did not find any victims but we often had to look away from the display when we found Hello Kitty backpacks and children’s toys in the water, reminding us of the terrible loss of life. We were disappointed that we could not bring closure to at least a few families. 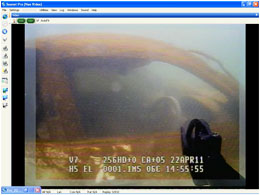 View of a submerged car from the SARbot. 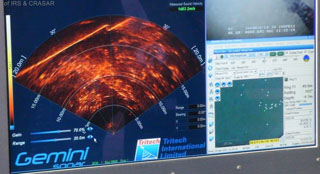 The other surprise was that the Japanese Coast Guard spontaneously joined in, directing us to areas that their divers were not allowed to work in. For example, there were large “islands” of floating debris that might have had contained victims but were too dangerous for divers. Fortunately it is very easy for a ROV to go underneath. Our conversations with the Coast Guard also illustrated a reason why it is necessary to increase awareness of robots. They told us that they had used ROVs 10 years ago but found them too difficult to pilot and didn’t have sonar, so they didn’t think about using them for the tsunami. I wanted to shout, “That was 10 years ago! Think how much laptops and cellphones and even cars have changed in 10 years!” The Coast Guard did arrange to start using ROVs from local distributors after that.

The IRS-CRASAR team returned on April 24, but was invited back to Minamisanriku Oct 20 to 27 to help identify debris throughout Shizugawa Bay that might negatively impact fishing. The SARbot ROV covered 80,000 sq meters in only six hours in the water, finding and tagging the GPS locations of 104 major objects that needed to be removed. The ROV found not one, but two, cars in an area that had been searched manually by divers and declared to be clear − which shows how valuable sonar is. A lighthouse was located and debris clogging some navigation lanes was marked. The harbormaster and the fishermen’s union were very pleased and expressed interest in buying an ROV for community use in maintaining fishing activities. ROVs cost between $30,000 and $100,000 so the idea would be similar to groups of farmers in the U.S. who buy an expensive combine and share it during harvest.

In addition to the humanitarian use of the robots for response and recovery, we have learned many lessons for the scientific community that will help improve the performance, sensors, and interfaces for these robots and make robots easier to use by anyone from anywhere in the world over the Internet.

It was an honor to assist IRS in helping the Japanese people. In retrospect, it is ironic that while the international press was criticizing Japan for having dancing robots but not robots at Fukushima, Westinghouse was bringing in the T-Hawk and IRS was too busy working with CRASAR and on upgrading Quince for Fukushima to engage in media response. It was unfortunate that a decade of leadership in rescue robots by IRS was missed or ignored by the press.

None of this would have been possible without the years of international collaboration enabled by joint NSF-JST funding and by the diplomats from both countries rising to the challenges posed by importing cutting edge technology during a disaster. We hope this helps establish a precedent and will encourage other countries to think about how to streamline their processes. No one country will ever have all the technology or resources needed to assist with response or recovery. By working together, we help save lives and mitigate the suffering and long-term economic damage to an area.

Robin Murphy is the Raytheon Professor of Computer Science and Engineering at Texas A&M, an IEEE Fellow, and director of the Center for Robot-Assisted Search and Rescue. She received her PhD from Georgia Tech and conducts research in artificial intelligence and human-robot interaction for rescue robots under funding from agencies including NSF, DARPA, and ONR. She has been honored with the Motohiro Kisoi Award (Japan), the Al Aube Outstanding Contributor Award (AUVSI), and an Eagle Award (NIUSR) for her insertion of ground, air, and sea robots for urban search and rescue at eleven disasters. She currently serves on the Defense Science Board and the Computing Community Consortium.