U.S. researchers are adapting new vaccine technology used to fight the COVID-19 pandemic to develop vaccines against other diseases, including HIV/AIDS.

Messenger RNA (mRNA) vaccines developed by U.S. firms, the U.S. government and international partners have proven 95% effective in preventing COVID-19 in clinical testing. Rather than use a weakened form of the virus, mRNA vaccines use a virus’ genetic code to trigger an immune response.

Now U.S. researchers are using mRNA technology, based on a 2005 discovery at the University of Pennsylvania, to develop vaccines against numerous other diseases that affect millions of people worldwide, including HIV/AIDS, Zika and the flu.

In partnership with the U.S. National Institutes of Health (NIH), Moderna is beginning clinical trials this year on an mRNA vaccine against HIV/AIDS, which affects more 37 million people worldwide. The U.S. government’s far-reaching efforts to end HIV/AIDS include PEPFAR’s $85 billion investment in the global response to the disease since 2003.

Pfizer, headquartered in New York, has announced plans with German producer BioNTech to jointly develop an mRNA vaccine against influenza. The two companies partnered in producing an mRNA vaccine for COVID-19. 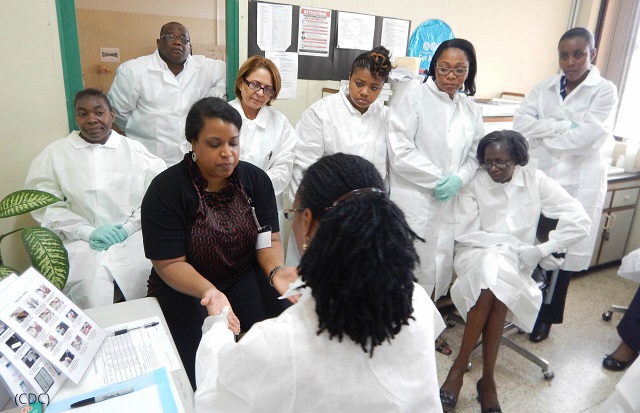 The United States has a long history of developing vaccines. Jonas Salk, an American physician, discovered a vaccine for polio in 1955, leading to the near eradication of the disease that once paralyzed hundreds of thousands of children annually.

Measles killed an estimated 2.6 million people globally each year before John Enders, an American scientist, developed a vaccine in 1963. Measles cases have fallen dramatically with roughly 142,000 deaths globally in 2018, according to the CDC.

As soon as the COVID-19 outbreak began, U.S. researchers at Moderna, NIH and the pharmaceutical firm Pfizer, in partnership with the German company BioNTech, began work on mRNA vaccines. In June, President Biden said the United States would purchase 500 million doses of Pfizer-BioNTech’s mRNA COVID-19 vaccine to donate to other countries.

The mRNA technology advanced during the race to end COVID-19 is informing research on vaccines and treatments for numerous other illnesses.

“Generally, the only thing that changes from one potential mRNA medicine to another is the coding region,” Moderna says on its website, referring to a vaccine component that targets the virus in the body.

Other U.S. firms working on groundbreaking mRNA vaccines and treatments include Gritstone Oncology and Gilead Sciences’ collaboration on a vaccine against HIV, and Kernel Biologics’ development of an mRNA-based therapeutic for cancer. Translate Bio is testing a treatment for cystic fibrosis, while Arcturus Therapeutics is developing mRNA vaccines for the flu and COVID-19, as well as therapeutics for cystic fibrosis and liver disease.

Dr. Anthony Fauci, director of the National Institute of Allergy and Infectious Disease and chief medical adviser to the president, said June 22 that the success of mRNA vaccines against COVID-19 “is absolutely going to put us a step ahead with other infections.”

“We have been able to show the extraordinary power [of mRNA] vaccine platform technology,” Fauci said.

Banner image: New mRNA vaccines have the potential to revolutionize the fights against diseases like HIV/AIDS, Zika and influenza. (© Shutterstock)