Do you need to know whether this year’s crop yields will provide enough food? What if an airline wants to quickly adjust routes to avoid severe storms and prevent delays?

Quantum computers have the power to analyze and calculate data faster than contemporary computers and are poised to transform fields ranging from science to aviation to finance.

The U.S. government in August invested $1 billion  for research into advanced technologies, including quantum computers and artificial intelligence. Some U.S. companies are already developing these highly advanced computers. 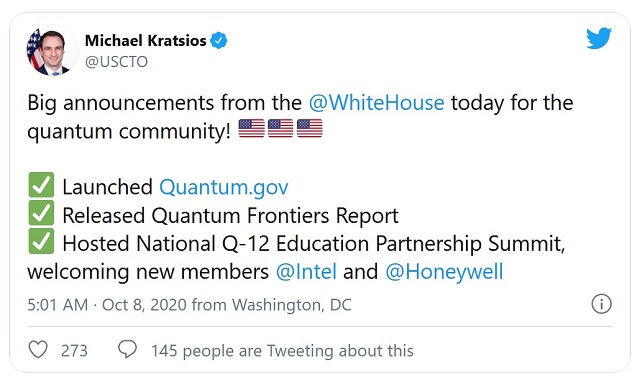 Honeywell and IonQ, a startup based in College Park, Maryland, each recently announced advances in quantum computer technologies. These computers process data at the scale of elementary particles such as electrons and photons. They also work faster than modern supercomputers, according to the Associated Press.

IonQ says its technologies perform sophisticated calculations by pointing lasers at individual atoms. Other companies, such as Google, IBM and Rigetti Computing are also building quantum technologies. Microsoft and Intel are investing in the education sector, becoming members of public-private initiatives like the National Q-12 Education Partnership, which will prepare students to work with quantum computers.

Experts say additional refinements to the technology are needed.

On August 26, the White House announced a $625 million investment over five years in five quantum information science research centers across the country. The U.S. private sector and academia are contributing an additional $300 million to the centers.

“Importantly, these institutes are a manifestation of the uniquely American free-market approach to technological advancement,” Michael Kratsios, the U.S. chief technology officer, aｄnd Chris Liddell, the assistant to the president and deputy chief of staff for policy coordination at the White House, said in the August 26 statement. “Each institute brings together the federal government, industry and academia, positioning us to leverage the full power and expertise of the United States innovation ecosystem.”