The term virtual reality (VR) tends to conjure up an image of someone putting on a funny-looking headset at an entertainment center or trade show and playing a multidimensional videogame where they soar through outer space and shoot at aliens along the way. People who love high-tech gadgets might even have such headsets at home so they can play VR games in their living rooms. But when it comes to potential applications for VR, videogames are just the tip of the iceberg. According to Owlchemy Labs CEO Alex Schwartz, VR is “the new frontier of where computing and interaction is going.”

Owlchemy Labs is a videogame development startup based in Austin, Texas, that was recently acquired by Google. The company started out creating humorous videogames and jumped into the VR sector after its leaders were invited to a private demo of a prototype headset.  “We saw it and we said this is going to be the future and we want to bet all of our resources and time on it because we were so passionate about how this could be the future of computers and the future of all these different industries,” said Schwartz in an interview with American View. 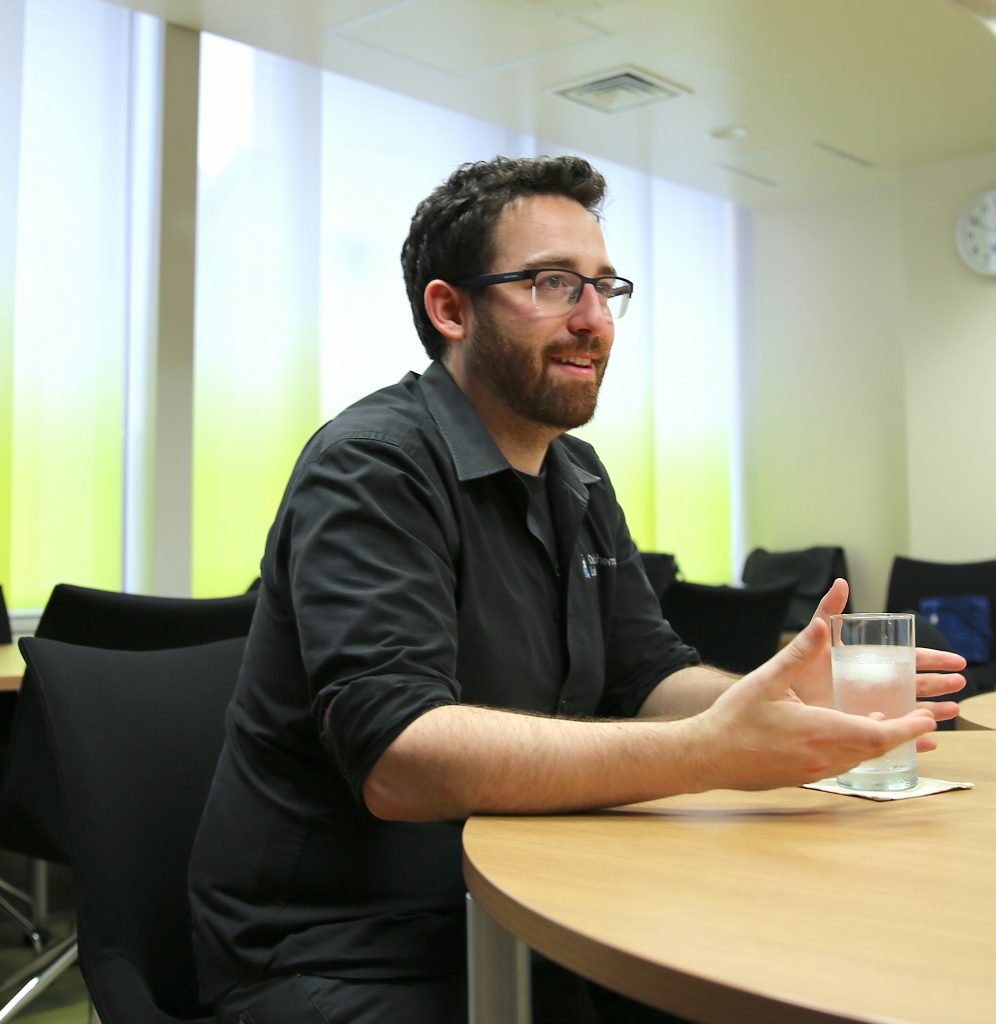 Inspired by this cutting-edge technology, Owlchemy Labs developed an award-winning VR game called Job Simulator. The concept of the game is surprisingly simple. It is set in the year 2050, when robots have replaced all human jobs. Players experience what it’s like to work at jobs that have become obsolete and novel to people in 2050. “Job Simulator is a very silly premise,” explained Schwartz. “In virtual reality, you would think that if I could go into a new world, I would do something fantastic like be on a spaceship or walk on the surface of Mars or go to the bottom of the ocean or fly. But it turns out there’s a lot of fun and magic to be found in just manipulating objects with your hands and picking things up and throwing them. You can become an office cubicle worker and pick up a stapler and throw it at your boss. You can be a gourmet chef, but you could take all the eggs out of the refrigerator and throw them on the ground if you want.” 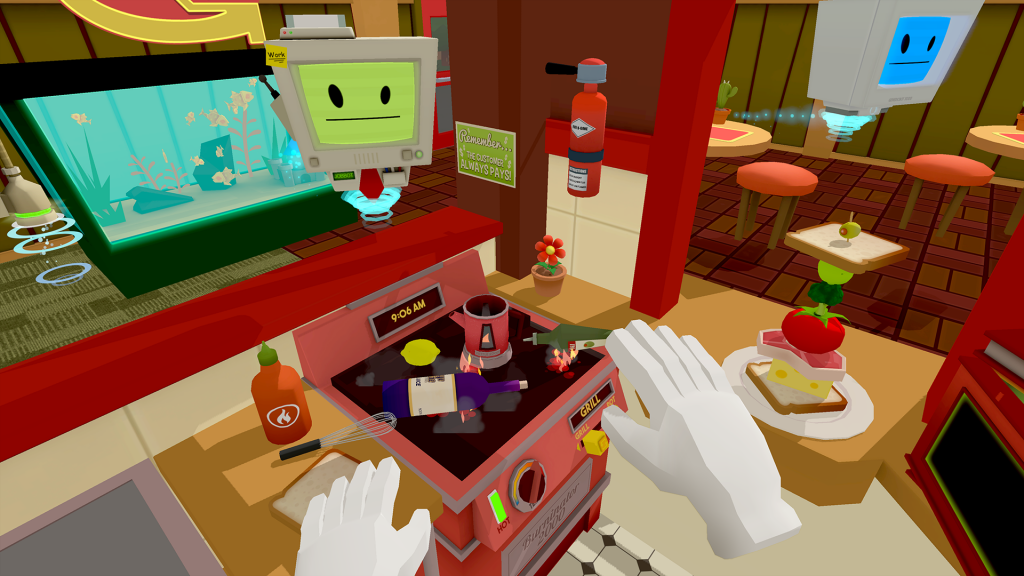 A kitchen scene from the VR game Job Simulator

Most VR games aim to transport the player to a futuristic realm to experience otherworldly sights, sounds, and sensations. But Job Simulator turns that concept on its head by having players perform actions that people do all the time in real life today. It’s a bold move in the sense that it strips VR down to basic physics and gives us a glimpse at how the technology could be used in the future. 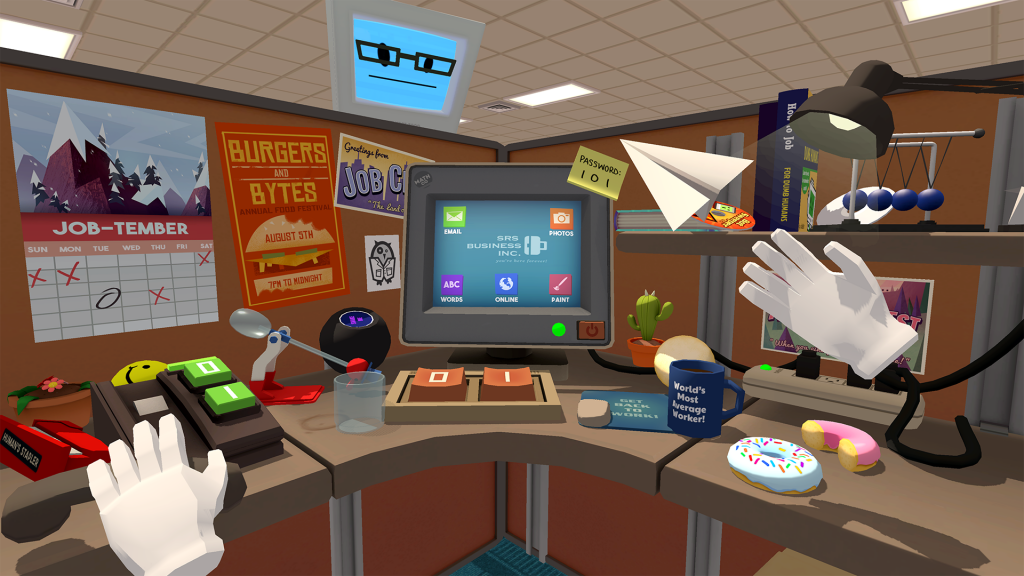 An office scene from the VR game Job Simulator

Although Job Simulator seems simple on the surface, it’s very complex from a development standpoint, explained Schwartz. “We spent a lot of time going through the very fine details of the psychology of how to message a user to feel weight with the item that you pick up with your hand and to understand and move about the world.”

Such meticulous development obviously requires a high level of technical expertise and dedication. We asked Schwarz what motivated him to pursue a career as a videogame developer. “I knew I wanted to do something with computers when I was young, but I didn’t know where and how to apply that,” he said. “I ended up looking at colleges in the States that had a game development degree, which was a very new and rare thing in 2005. Worcester Polytechnic Institute was one of the first schools to offer that degree, so I decided to try that out. Now there are many, many major universities that have programs in games specifically. But you need to do your own work outside of the coursework to get into this industry because it’s so competitive.”

In a speaker program sponsored by the U.S. Embassy in Tokyo, Schwartz also talked about the process of launching a successful videogame development startup. “We’re regarded as one of the top VR studios building content today and have been lucky enough to garner awards for our work, but we didn’t start off like this,” he explained. “I think it’s important to note that along the way, we had multiple financial failures as a game development studio.” He also emphasized the importance of seeking advice from entrepreneurs who’ve already been through the process of launching a startup and preparing for the possibility of not succeeding right away by doing part-time jobs or contract work to generate income in the early stages.

Tetsuya Mizoguchi, CEO of Enhance Games and the creator of several highly popular VR games, also spoke at the Embassy-sponsored program. He explained how the business climate for VR development has changed in recent years. “A wide variety of new ways to raise funds such as crowdfunding have emerged and a lot of fund managers are really excited about the future of VR and AR (augmented reality), so I think the timing is really good,” he said. “Up until now we’ve had nothing but limitations, and we’ve had to give up on a lot of things. We’ve finally broken free from all the restraints and at last we can really create things based on what we imagine.”

Mizoguchi’s latest creation is a “synesthesia suit” for the VR videogame Rez Infinite that allows the player to experience music not just through the ears, but also through the senses of touch and sight. The full-body suit vibrates along with the music and simultaneously lights up as the player flies through space shooting at enemies. He explained that although videogames used to be confined to the closed box of a screen, VR is beginning to open that up and allow developers to design games just as they imagine them in three-dimensional and 360-degree space.

Both Schwartz and Mizoguchi believe that VR has the potential to change our lives for the better by freeing us from the constraints of time and space. The technology extends beyond games and is already being applied in fields such as education, design, retail sales, and healthcare. VR makes it possible for people to act spontaneously in a virtual world in ways that are reflected in the real world without having to be taught what to do or how to do it. 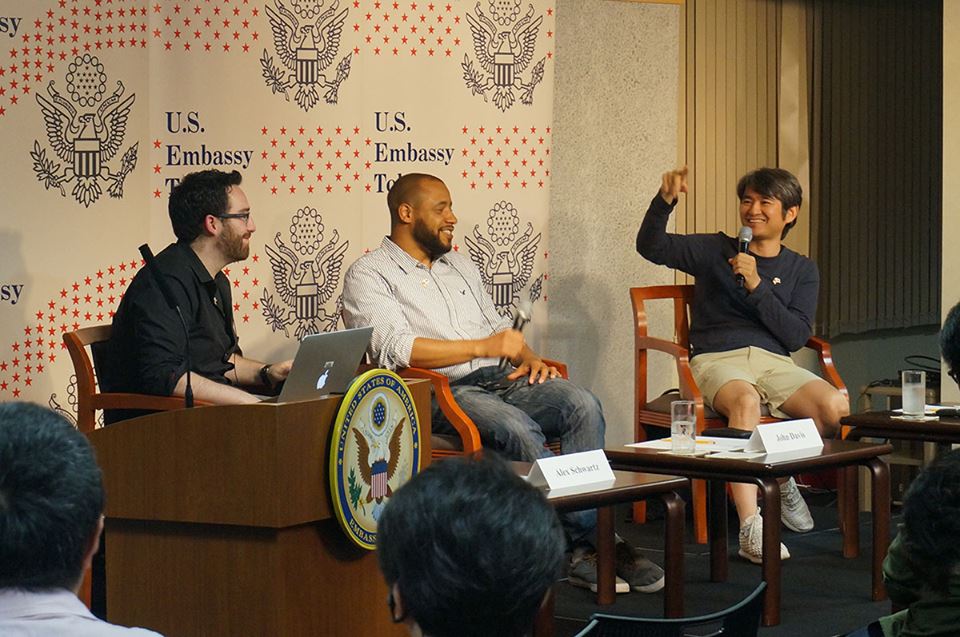 Alex Schwartz (left), John Davis (center), and Tetsuya Mizoguchi (right) talk about the future of virtual reality at a speaker program sponsored by the U.S. Embassy in Tokyo on May 11, 2017.

“Usually with new technology you have to pitch to people on why this will be a thing,” explained Schwartz. “You have to sell them on why it’ll be important. With VR, when people come out of it for the first time, it’s the reverse. They start telling me how they could see this changing the future of medicine and doctors can practice and see virtual overlays. That just comes out of people’s minds after those experiences, so I think that’s a really good indicator of how it’s going to change everything. It doesn’t require someone else to explain how it might help your life. It’s instantly apparent, it’s instantly intuitive, and it’s what we’ve always wanted.”