Ihor Khabatiuk wanted to keep his farm in Ukraine going but recognized that Russia’s invasion of his country in February put his family — and his family’s business — in jeopardy.

“It’s difficult, but I want to keep people employed and the farm running,” Khabatiuk said. He was unsure if he would be able to buy enough seeds this year for his farm in Rivne oblast in western Ukraine.

Khabatiuk is among 12,700 farmers across Ukraine to receive emergency assistance from the U.S. government. 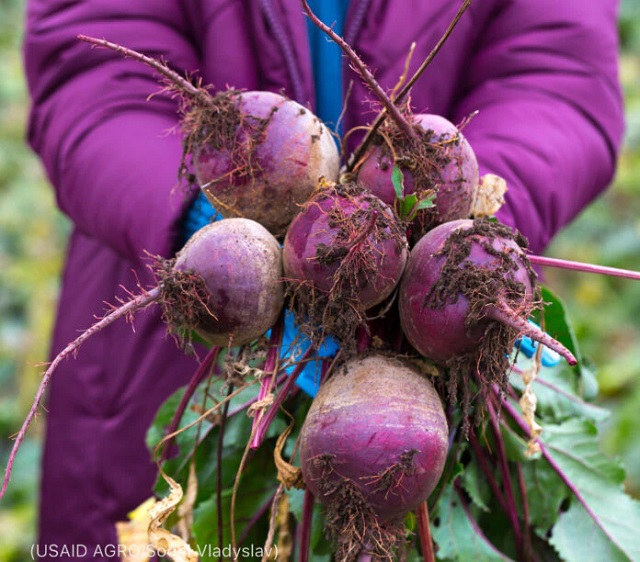 Beets harvested from a field in Ukraine. (USAID AGRO/Sodel Vladyslav)

The U.S. Agency for International Development (USAID) provided Khabatiuk high-quality corn to feed his livestock as part of its $100 million Agriculture Resilience Initiative (AGRI) – Ukraine, which was launched in July.

Other Ukrainian farmers obtain seeds, fertilizer and pesticides as part of the program. Some 20% of the nation’s registered agriculture businesses are expected to get assistance.

“This new initiative is going to help farmers get back on their feet and get the agricultural economy moving again,” USAID Administrator Samantha Power said in a tweet when the agency launched the program.

Agriculture is crucial to Ukraine’s economy (PDF, 636KB), as it accounts for:

The program’s goal is to enable Ukraine’s agriculture sector to reach the export levels it recorded before the invasion.

USAID announced October 10 that Bayer, the German multinational pharmaceutical and biotechnology company, will invest $35 million to expand the company’s seed processing facility in Pochuiky, the largest of its kind in Ukraine. The plant produces corn seed while employing more than 100 permanent workers. 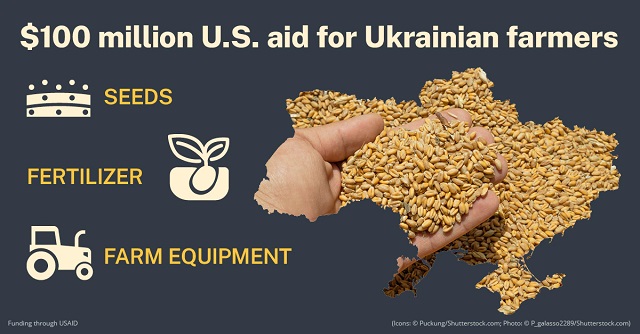 USAID also provides drone technology that allows Ukrainian farmers to apply fertilizer and pesticides by air rather than on the ground. The drones help reduce fuel and water usage, a crucial need for farmers like Khabatiuk who are fighting to keep their farms running despite the high costs of supplies.

“We work only from passion, and we are economizing as much as we can in order to keep the staff,” he said. “I advise farmers to just hang on … The main task for today is to win the war.”