A Monument to U.S. Women’s Right to Vote Turns 100

Susan B. Anthony, Lucretia Mott and Elizabeth Cady Stanton dedicated their lives to the cause of women’s suffrage — the legal right for women to vote in the United States.

“[I]t is a downright mockery to talk to women of their enjoyment of the blessings of liberty, ” Anthony said in a speech after her arrest for voting in 1872, “while they are denied the use of the only means of securing them provided by this democratic-republican government — the ballot.”

American sculptor Adelaide Johnson captured this struggle in marble a century ago. Her sculpture, Portrait Monument to Lucretia Mott, Elizabeth Cady Stanton and Susan B. Anthony (1920), portrays the early suffragettes who started the movement that led to the 19th Amendment, which in 1920 gave women the right to vote.

The sculpture was unveiled in the U.S. Capitol building’s rotunda the year following passage of the 19th Amendment. It was soon moved to the Capitol’s crypt, where it was on view for 75 years, before returning to the rotunda in 1996. There, the sculpture remains on display to educate visitors about women’s suffrage. 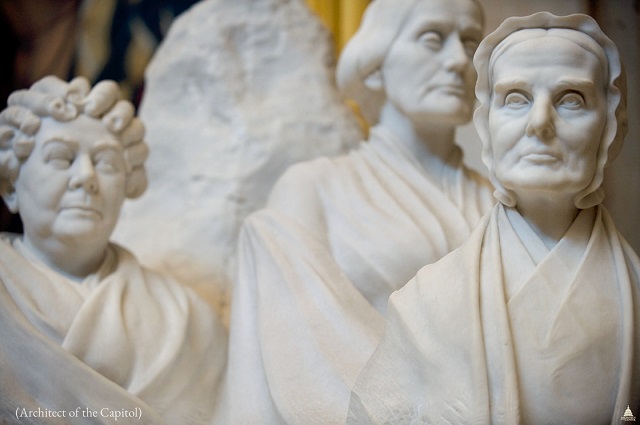 “As more women from diverse backgrounds win elected office and gain increasing prominence on our national stage, U.S. Capitol art will continue to reflect the changing nature of women’s role in society,” said Michele Cohen, a curator for the Architect of the Capitol.

Anthony was born 200 years ago in Adams, Massachusetts on February 15. She grew up in a progressive environment — her father was friends with Frederick Douglass — and after years of abolitionist advocacy, she was inspired by women’s suffrage after her family attended the Seneca Falls, New York, convention in 1848.

The Seneca Falls convention was the first time a group of people formally gathered to discuss women’s suffrage. Mott, an abolitionist Quaker preacher, organized the event. Before and after the convention, she advocated for women’s education and workplace equality.

Three years after the convention, Anthony met Stanton and the two bonded over the cause. They remained lifelong friends and advocates for women’s right to vote.

Although all three women died before the 19th Amendment was passed in 1920, their legacy lives in the many women participating in democracies today as both voters and elected officials. 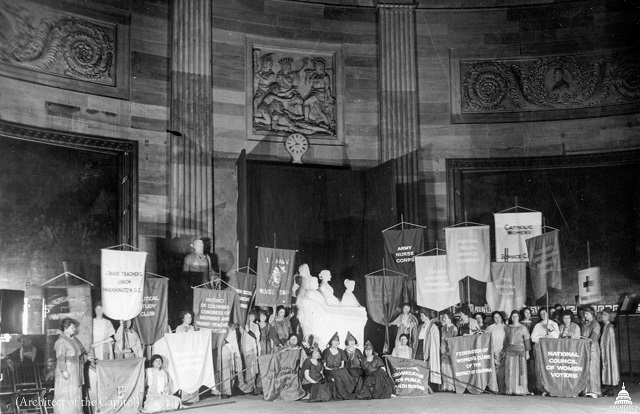 Adelaide Johnson’s sculpture of Stanton, Anthony and Mott is unveiled at the U.S. Capitol on February 15, 1921. (Architect of the Capitol)