Ambassador Hagerty – A Tennessee Businessman with Strong Ties to Japan

In August 2017, William F. “Bill” Hagerty IV arrived in Tokyo to assume his official role as United States Ambassador to Japan. Now, just a few months later, he has already traveled widely throughout the country, visiting such key cities as Osaka, Kyoto, Nagoya, Naha, Fukuoka, and Sendai. Ambassador Hagerty has also hosted visits to Japan by President Trump, Secretary of State Tillerson, and many other Cabinet officials. Although most people in Japan have probably seen the Ambassador on television and are familiar with his name by now, they might not be aware of his strong ties to Japan and the career path that led him back to Tokyo. American View sat down with Ambassador Hagerty at his residence to learn more about him and offer our readers a closer look at the man behind the title.

“When the President invited me to come and be the Ambassador to Japan,” he said, “I was so delighted to accept his offer, not only because it’s a wonderful opportunity from a professional standpoint to help my country and to help another country that I love – Japan, but also it’s a chance to share a new culture and something that’s quite unique with my children and my family.” 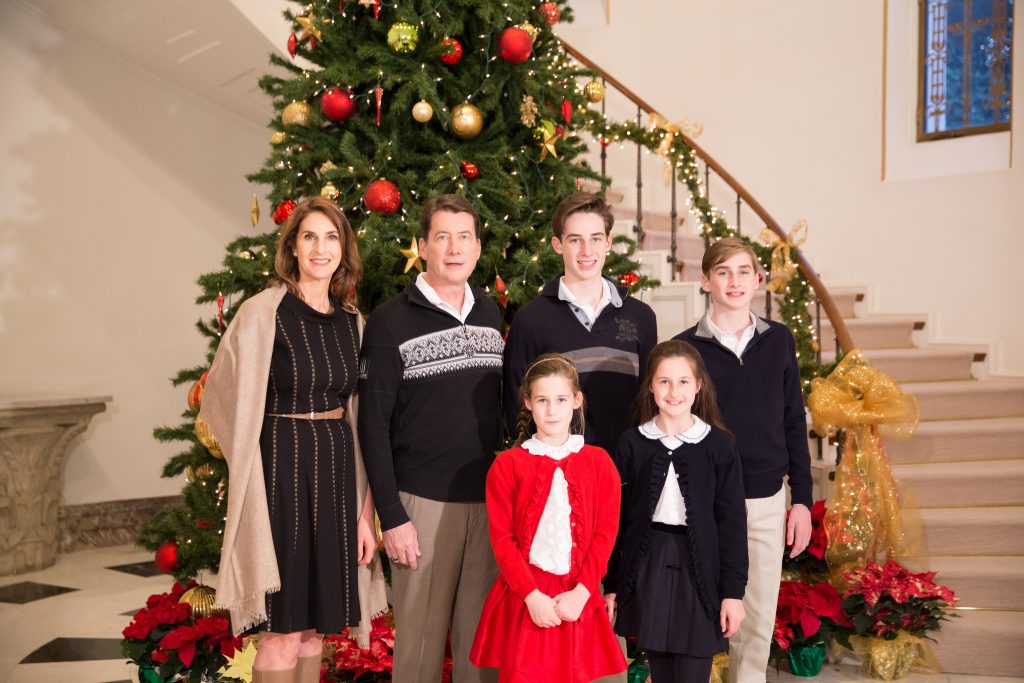 Ambassador Hagerty with his wife Chrissy and their four children, William, Stephen, Tara, and Christine, at their residence in Tokyo

Having worked here for three years in the late 1980s and early 1990s, Ambassador Hagerty is no stranger to Japan. “Here in Tokyo I found a wonderful culture, great outdoor life and nature, and an exciting and vibrant economy where innovation was at the fore,” he recalled. “There were people coming from all over the world to Japan to try to understand and witness what was happening here. It was a revolution in technology.”

Living in Japan had a deep and permanent impact on the Ambassador, even after he returned to the United States to participate in the prestigious White House Fellows program. Right before he left Japan, he met with then-Ambassador Michael Armacost, who had been a White House Fellow many years before. “I remember sitting with Ambassador Armacost in the office I use today,” Ambassador Hagerty said, “talking about what I might expect when I went to Washington. At that time, I certainly never dreamed I would come back and be seated at the same desk.”

Even as Ambassador Hagerty worked in the White House, he maintained his ties to Japan, and he continued to benefit from his international knowledge and relationships after his return to the private sector. He later became a member of the Tennessee Governor’s Cabinet and spent four years deepening ties with Japanese businesses. “We have over 180 companies now from Japan that are located in Tennessee, employing more than 40,000 Tennesseans,” he said. “I couldn’t be more proud of the small contribution that I made to help create that type of nexus. And having the opportunity to come here as the Ambassador of the United States to Japan is the culmination of this effort that has taken place over two and a half decades. It’s an interesting career path, but one that I think perfectly suits where we are today in our relationship with Japan.”

When he returned to Japan as ambassador this August, Ambassador Hagerty found a country that remained every bit as beautiful as it was when he lived here more than two decades ago. Sharing this experience with his wife Chrissy and his four children has made it even more special. “The opportunity to bring my family to Tokyo is probably one of the best things that ever happened in my life,” he said. “Both my wife and I have had the benefit of living overseas and we’d often talked about how wonderful it would be if we could have the same experience unfold for our children. They are embracing Japan in a way that I find really energizing.” 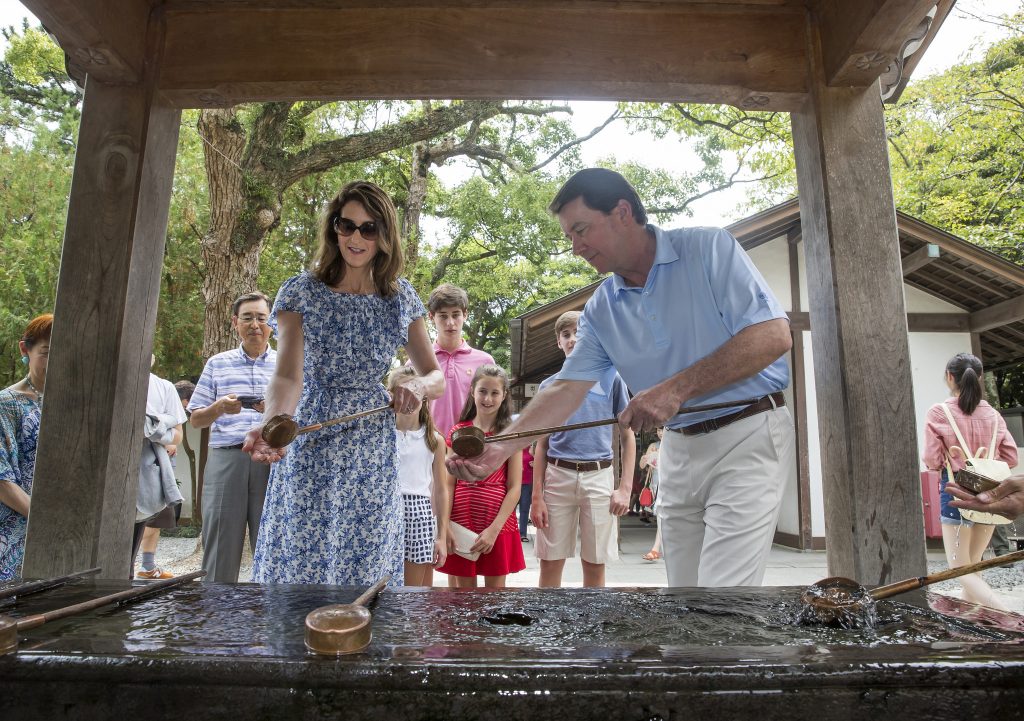 Ambassador Hagerty and his family visit Kotoku-in Temple in Kamakura

The Ambassador explained that soon after he and his family arrived in Japan, he reached out via Twitter and asked for advice on what parts of the country they should visit. “We got some great suggestions – places like Okinawa, Hiroshima, Kyoto,” he said. “We’ve had a chance to go to several of these places that have been recommended. In fact, the very first visit we took was to Kamakura. We had a wonderful visit there. We recently were in Kyoto. The foliage was colored orange, red, brown, and green. It was spectacular. I don’t think there’s a more beautiful place in the world than Kyoto in the fall.”

In addition to the stunning scenery, Ambassador Hagerty and his family have been enjoying the many culinary delights that Japan has to offer. One of his daughters loves shabu-shabu, the other one likes wagyu beef, and his two sons are partial to sushi, ramen, and udon, while his wife loves just about every kind of Japanese cuisine. But surprisingly, the Ambassador’s own favorite is Japanese-style curry rice. “It’s a heartwarming meal – something that’s filling and something that I enjoy,” he explained. 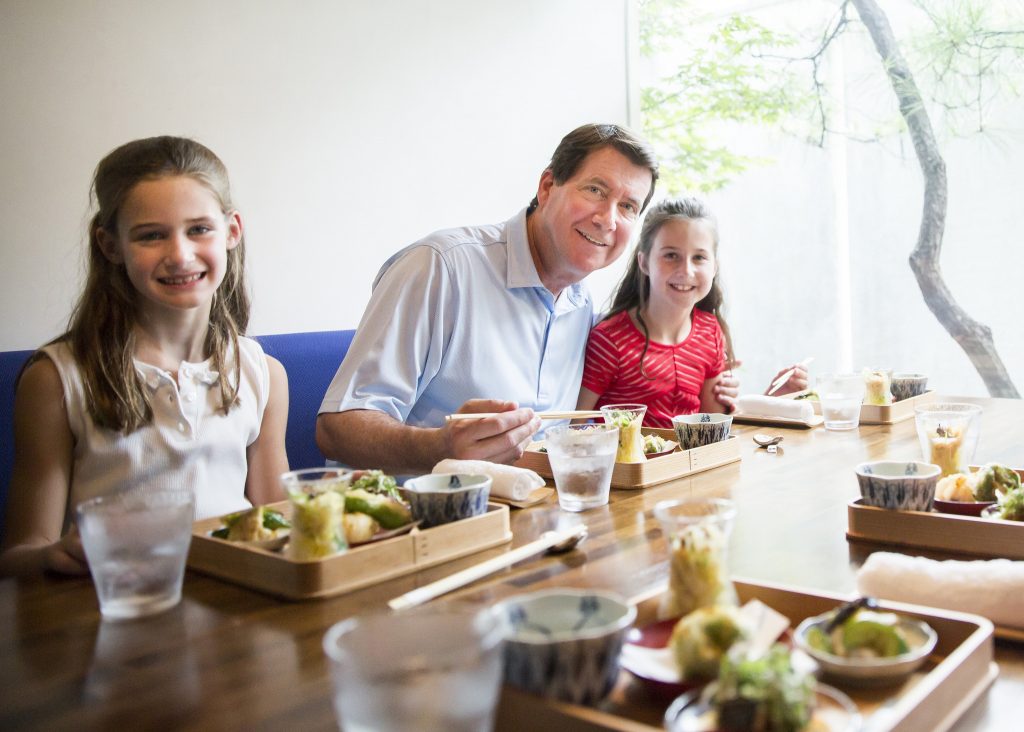 Ambassador Hagerty and his daughters enjoy a Japanese meal in Kamakura

One of Ambassador Hagerty’s priorities as the U.S. envoy to Japan is to deepen people-to-people bonds, particularly among young people. He explained that he hopes to draw on his roots in Nashville, Tennessee, a center for American music, to forge ties between Americans and Japanese by sharing musical traditions. “Music is a great common bond for people,” he said. “I hope to see more activity where we can help stimulate interest in American music and Japanese music and share those cultural bonds.”

The Ambassador is eager to interact with as many young people in Japan as possible, and has already visited several high schools and colleges here. When he talks to students, he encourages them to consider studying in the United States. “I think living abroad broadens a person’s perspective,” he said. “I think it will make a student a much more valuable employee when they are ready to enter the workforce. Learning a foreign language not only helps your brain and helps you become a better student, but it really makes you more marketable, so I would encourage every student in Japan who has an interest and a curiosity about what might be happening in the broader world to consider studying overseas, and certainly I would like them to consider studying in the United States.” 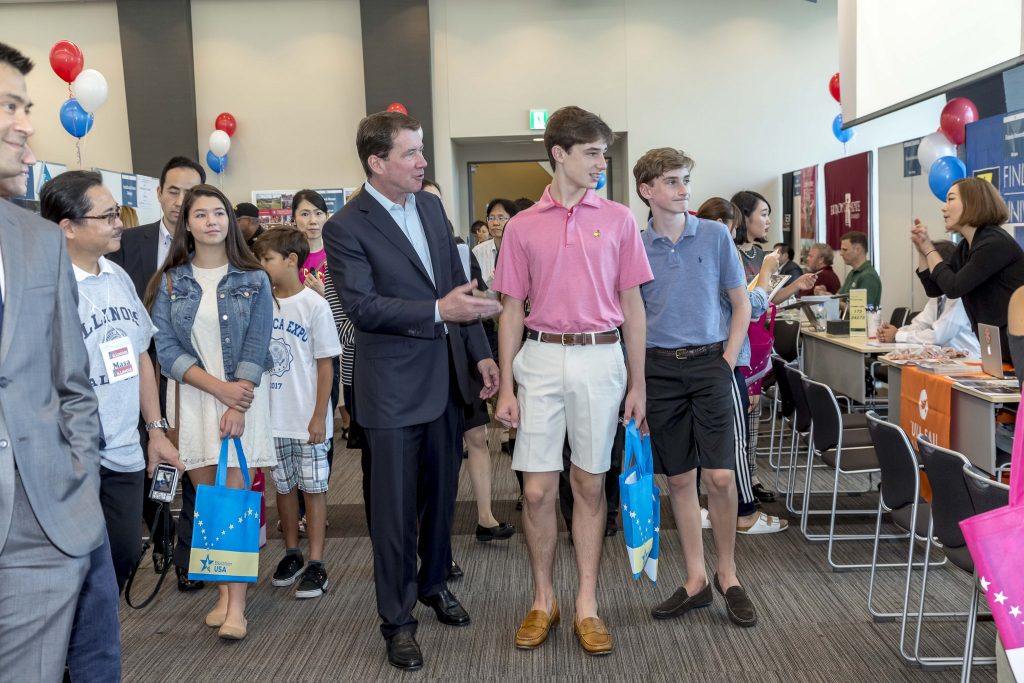 Reflecting on his own career path, Ambassador Hagerty talked about his upbringing in Tennessee, saying, “I was very fortunate to be raised in a small town in the southeast. People there have a kind and endearing nature, I think. It made it easy for me to fit into the culture in Japan when many years later I was fortunate to be posted here when I worked for the Boston Consulting Group. It was one of the most wonderful places a young person could have ever been posted.” 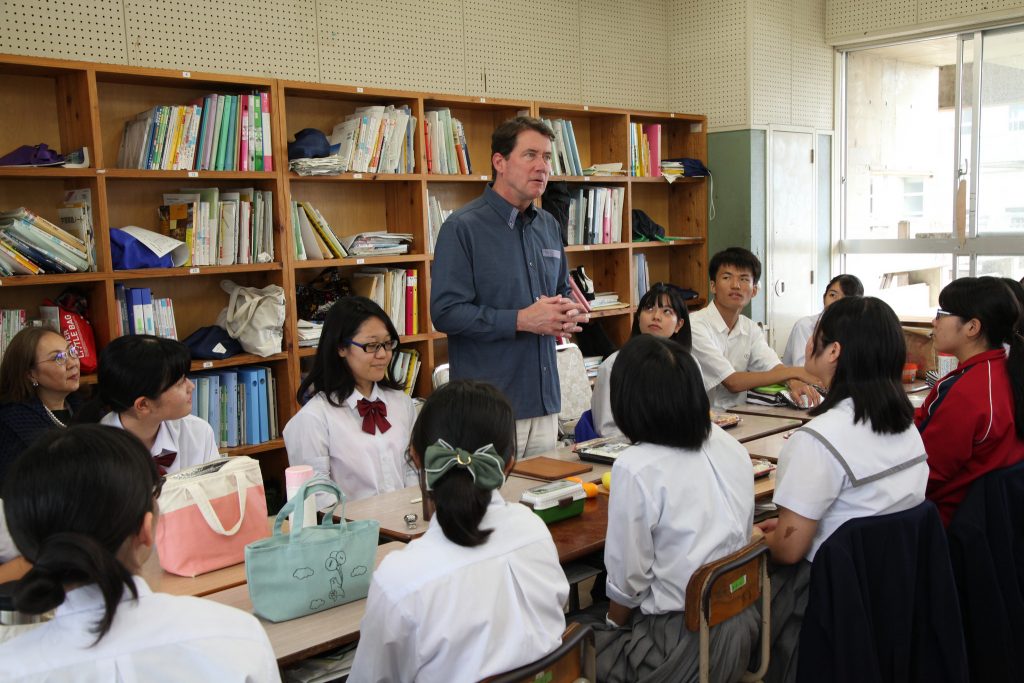 When asked what advice he would give to young people embarking on their careers, Ambassador Hagerty said that as the CEO of his own company, he sought people with “energy, adaptability, and a creative spirit.” He went on to say, “You also have to bring a sense of empathy to the table. You have to understand other people’s perspectives, particularly if you’re trying to change things.” The Ambassador often tells his own children “to show up, to volunteer, to be engaged.” When it comes to leadership, he feels it’s important to have a clear vision. “But you’ve got to combine that with courage, the will to break through walls if you need to,” he added.  ”If you can bring together a lot of people with that type of perspective and common purpose, you can accomplish anything.”