Who are America’s diplomats?

The diplomats who represent the United States overseas have diverse backgrounds and serve in a wide variety of positions at U.S. embassies and consulates around the world. In addition to the Department of State, federal government agencies such as the Department of Commerce, Department of Homeland Security, and Department of Agriculture send their staff to work at embassies overseas and have offices there. While embassies are most often thought of as places that issue visas and provide other consular services, they actually perform a wide range of other functions and are staffed by such personnel as medical doctors, veterinarians, accounting and legal experts, and IT specialists. To find out more, I spoke with Assistant Information Officer Walid Zafar about why he aspired to become a diplomat and what his duties are. Here’s what he told me.

I was born in Kabul during the Soviet occupation of Afghanistan. My mother died in a fire when I was a toddler, so my grandmother took on the responsibility of raising me. After Soviet forces withdrew, a violent civil war broke out in Kabul, and we fled to neighboring Pakistan. I was very small, maybe four years old. Eventually, we immigrated to the United States and settled in Alameda, an island in the San Francisco Bay Area. Alameda was a very diverse place to grow up, and I was surrounded by people of many cultural backgrounds, including Filipino Americans and Ethiopian Americans. 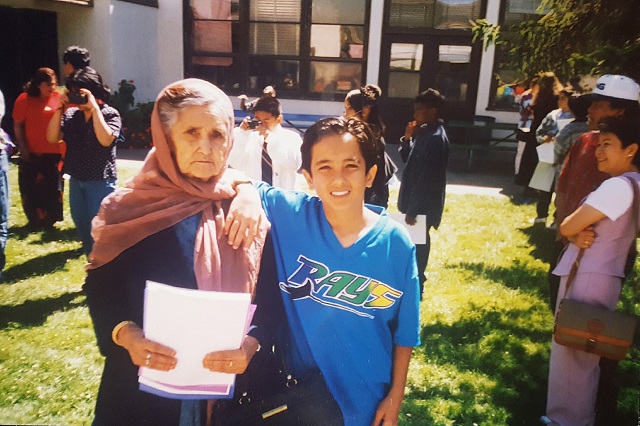 Zafar with his grandmother after moving to California.

I don’t know my real birthday

I grew up with my elderly grandmother and her youngest son, who was in his early twenties when we arrived. My uncle was quite busy working and my grandmother couldn’t speak English, so I had to navigate school by myself as well as with the help of community members, including teachers and the parents of my friends. For example, I’d take my grandmother to parent-teacher conferences in elementary school and interpret for her. Since we fled Afghanistan in the cover of night, the last thing on anyone’s mind was to grab my birth certificate, even if they could manage to find it. So, I am not sure exactly when my actual birthday is. For that reason, my official birthday is January 1, a placeholder date that many immigrants in the U.S. use since they lack documents to verify their exact birth dates. 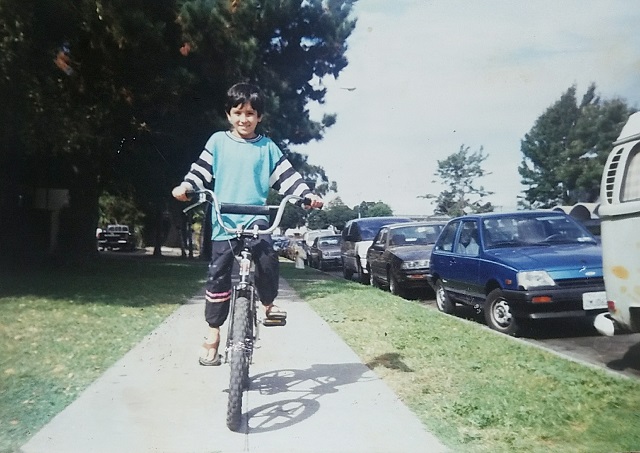 Why I became a diplomat

My grandmother poured a lot of blood, sweat, and tears into giving me opportunities, so I’ve always been motivated to succeed, as well as to stay out of trouble, to honor her sacrifice, and make her look good! Growing up, I felt tremendous pride every time relatives would praise my grandmother for something I had accomplished. By the time I became an American diplomat, my grandmother had suffered a debilitating stroke and I couldn’t communicate with her effectively on what I was doing, but relatives still praised her for getting me so far!

I grew up on food stamps and rental housing assistance. As a child, I would feel shame and embarrassment being on government assistance, especially using food stamps at the grocery store. Of course, there is no shame in being a recipient of these important programs. But when I grew up, I was motivated to work in public service to give something back for all that America had given me. When I have a chance to talk to students, I tell them, “You don’t have to be from the elite to make it in America.” Although there are social, political, and economic inequalities and many people face hurdles, including institutional hurdles, there are also opportunities and paths to success in America that are not easily found elsewhere. Even immigrants who fled civil war and survived on food stamps can grow up to become diplomats and represent America on the world stage. To me, that’s the essence of America.

Support from Students Rising Above

In high school, a teacher nominated me for a program called Students Rising Above, a non-profit that provides mentorship, career counseling, and financial assistance to low-income first-generation college-bound students. Students Rising Above was founded by Japanese American journalist Wendy Tokuda. After I was selected, a news crew came to my high school to interview me for a segment on local television. My story was about many of the things I mentioned earlier: escaping war-torn Afghanistan and being raised by my strong-willed grandmother. That year, I was one of just eight students selected to be in the program. Over the years, the program has grown considerably thanks to the generosity of its donors, and now supports hundreds of students. I still stay in close touch with my mentors from the program.

During my final year of college, I attended a seminar led by a Foreign Service Officer who was visiting colleges and universities around the country to recruit future American diplomats. Up to that point, I had considered a career in diplomacy as out of reach, but I was surprised to hear that America’s diplomatic corps is open to all. So, I decided to take the Foreign Service exam. It’s quite a competitive process, and I failed several times. However, I never gave up on my dream, as lofty as it seemed, and it finally paid off.

Serving in my motherland

For my second assignment, I returned to Afghanistan to work at the U.S. Embassy in Kabul, just a stone's throw from where I was born. It was a surreal experience being back in Kabul, a place that seemed to only live in my imagination. Other than very vague memories, what little I knew about the city was based on stories my grandmother told.

My year in Afghanistan was rewarding but also very heartbreaking. Because I spoke Dari, I was able to connect with my Afghan colleagues in ways other American officers could not, but I also felt immense sadness witnessing the tragedy of the conflict that my family escaped continue to consume everyone around me.

My work as an assistant information officer

The U.S. Embassy in Tokyo is quite large and very busy. The press section, where I work, is at the center of it all, given Japan’s vibrant media environment. There is always work to do to tell America’s story to the Japanese people, but by far my favorite part of the job has been visiting schools as part of our Go For Gold campaign. When I visit schools, I try to do my entire presentation in Japanese, but my Japanese still isn’t very good. Before the pandemic, I even got to try the world-famous Japanese school lunches! 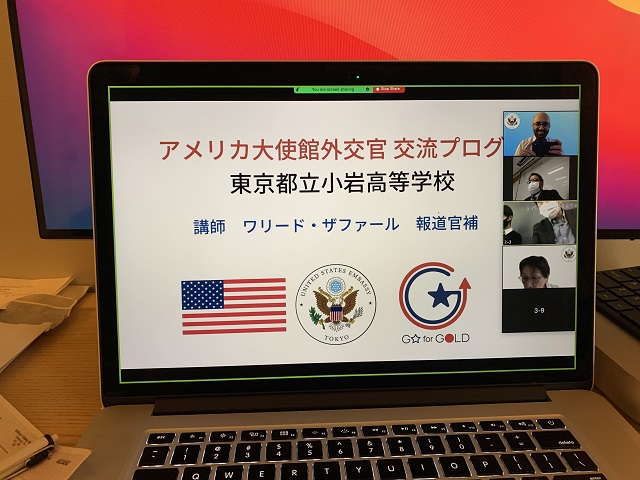 After the Go for Gold programs moved to a virtual format during the pandemic, Zafar gave an online presentation to Koiwa High School.

My life as a diplomat

Volunteerism and service to others is a big part of the American ethos. While I owe a lot to my grandmother's selflessness, I am equally grateful for the generosity of countless others who had no reason to mentor and guide me other than that they were just good people giving back. My work as a public servant is my way to pay it all forward. 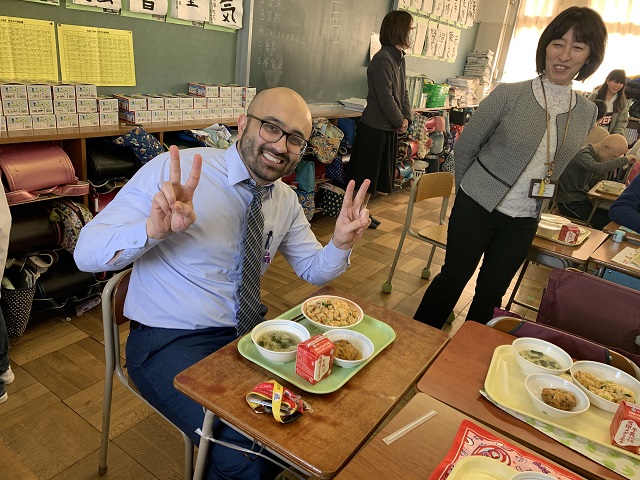 Zafar got to try a typical Japanese school lunch during a visit to a local school.