By Matt and Susan Smith

We first arrived in Kakunodate, Akita, in the summer of 1997 with a 3-year-old son, a 1-year-old daughter, no international experience, and no Japanese language skills. Matt was to teach English at one of the local high schools. Little did we know that this would be the beginning of a relationship between our family and a small town that would endure, stronger than ever, more than 20 years later.

Most of the English teachers working for the JET Program are single, so couples are unusual, and families with children are quite rare. But even though we stood out, we were welcomed with love by our new community. Not long after our arrival, our neighbors came to our back door and scooped up the children, as we hurried behind. This apparent kidnapping was, in fact, an invitation to their family’s Obon celebration. Whether we were in the store, on the train, or on the street, local people kept coming up to us with gifts of food, money, and even little pet turtles for our children.

A month after we arrived, we participated in Kakunodate’s 350-year-old Yamabutsuke Festival, a three-day extravaganza that features seven-ton portable shrines crashing into each other in the narrow streets as lively festival music delights the crowds.

Then came autumn with its dazzling leaves along the historic Bukeyashiki Street, a samurai district that is just as it was when the Satake clan established Kakunodate as a castle town 400 years ago. Walking among the old houses and gardens, one feels like an extra in a film set in the Edo Period. 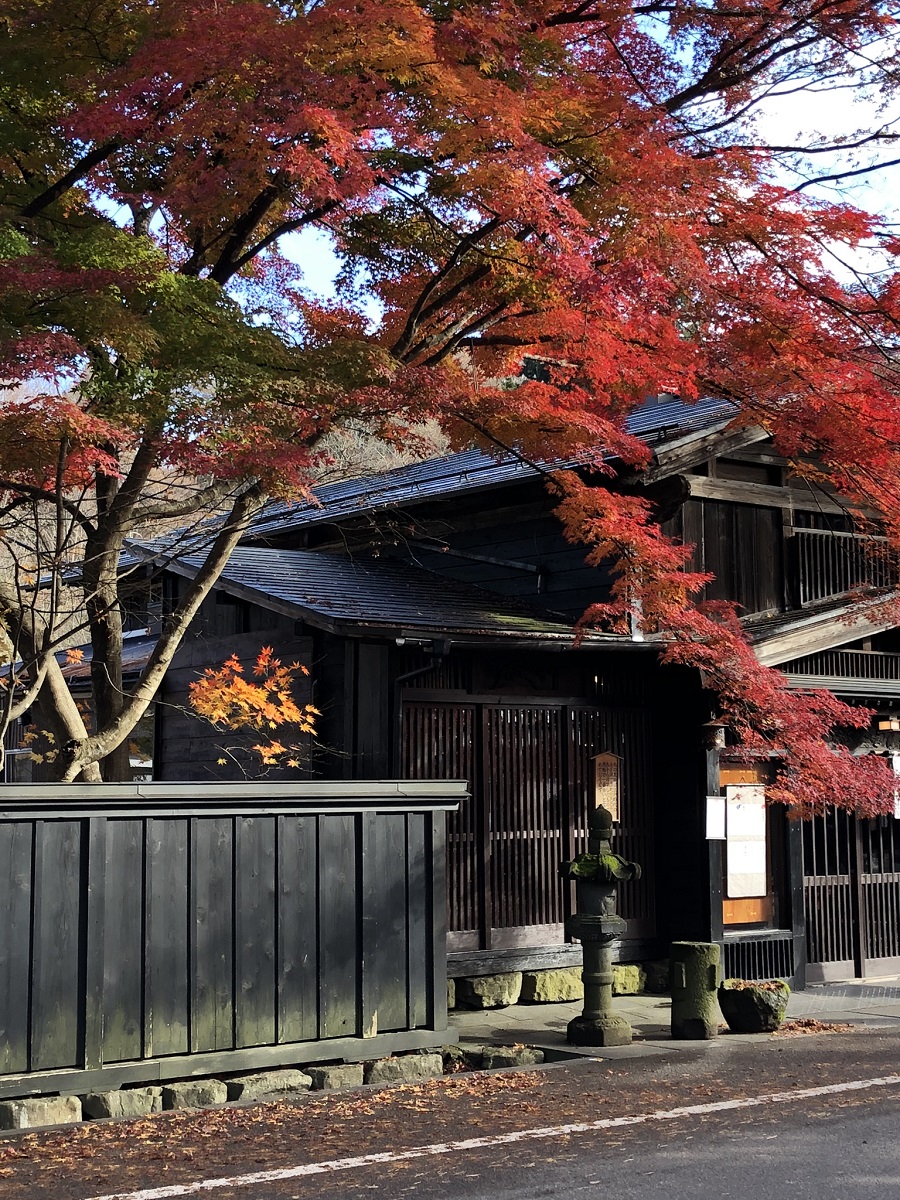 Autumn turned to the whitest of winters as snow fell by the meter, and we got around town pulling the children on a plastic sled. February’s notable winter scene is Kakunodate’s Hiburi Kamakura festival. Amid snow huts built near the banks of the river, straw baskets attached to long ropes are set ablaze. Participants swing the fire around themselves, creating a circle of purification and beautiful nighttime images.

Winter turned to spring and with it came the arrival of cherry blossoms. In 1934, Kakunodate planted a tunnel of sakura trees along the Hinokinai River to celebrate the birth of Crown Prince Akihito. Local people barbecue under the trees and reconnect with their neighbors after the isolation of a long winter.

Even more important to us than the sites and seasons were the people. There was the volleyball coach who helped us locate teachers who had worked with Matt’s father when he taught English in Noshiro in the late 1950s. There was our dear friend whose family runs Shinmeisha Shrine, the heart of the old town’s cultural identity. When our son became the first foreign student in the history of his preschool, she took it upon herself to visit school every day in the first couple of weeks to make sure he was okay. And there were our neighbors who chastised us for locking our doors because they had made dinner to put on our table but could not get in. We never locked our doors again!

Our two years in Kakunodate came to an end when Matt joined the Foreign Service. What a huge rush it was to return to Japan 20 years later to work at the Embassy as the Minister-Counselor for Management! While settling into the fast pace of life in Tokyo, we knew we had to get back to Kakunodate before too long. Celebrating 30 years together as a couple seemed like the perfect time to do it. 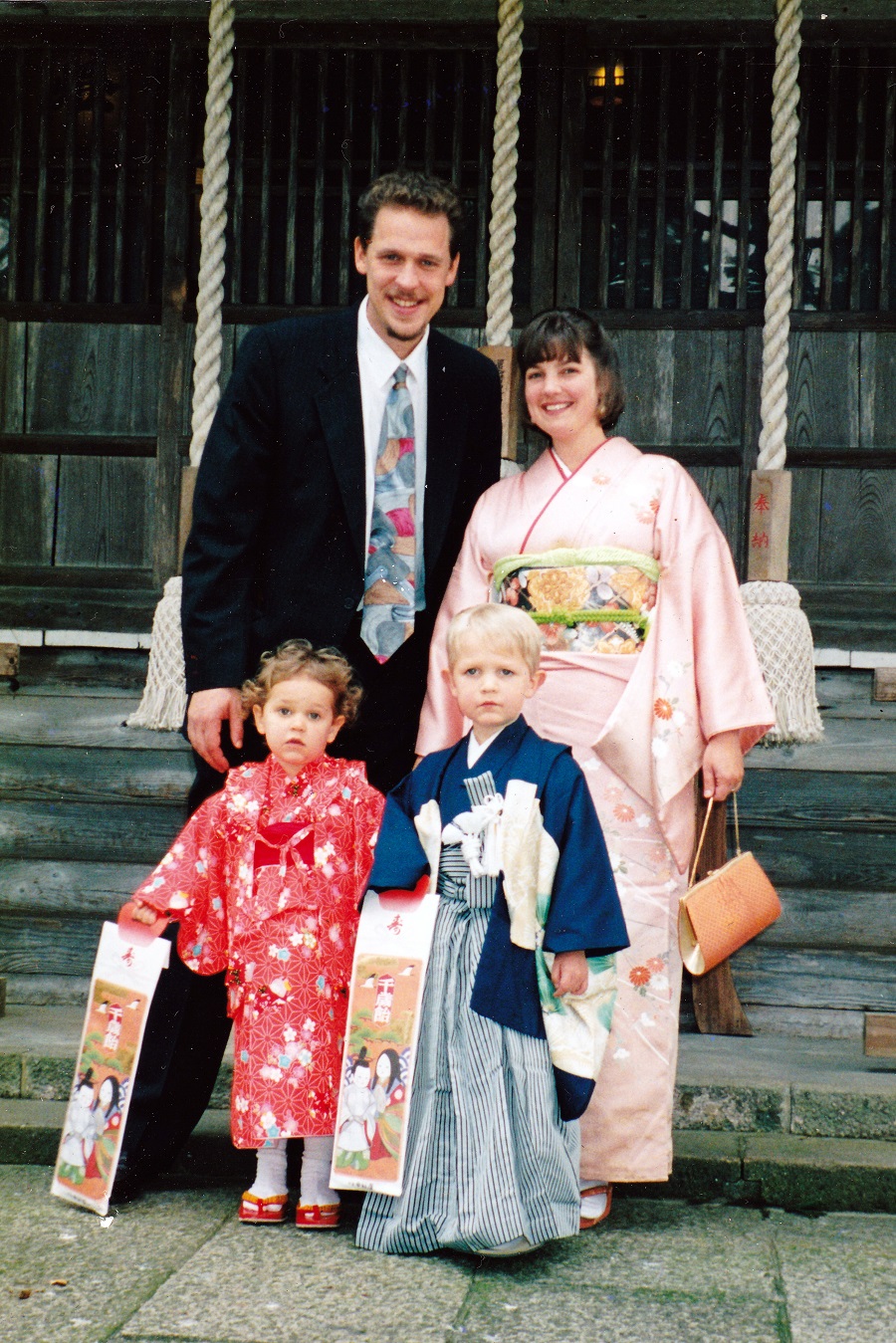 Dressed Up for the "Shichi-Go-San" Festival at Shinmeisha Shrine in 1998.

We worked with our consulate in Sapporo to set up a speaking engagement at Kakunodate High School as part of the Embassy’s Tokyo 2020 Olympics-themed “Go for Gold" youth outreach initiative. It was incredible to work again with one of the same teachers we had known in the ‘90s to organize the program, and really wild to be greeted by office personnel who were Matt’s former students. The school was old and cold, but filled with excited administrators, teachers, and surprisingly genki high schoolers. We shared stories and photos of our international travels and the work of a diplomat, gave out many prizes, took a lot of pictures, and championed study in the United States as an opportunity for Japanese students to have the same kind of overseas adventure that we had enjoyed in their country. 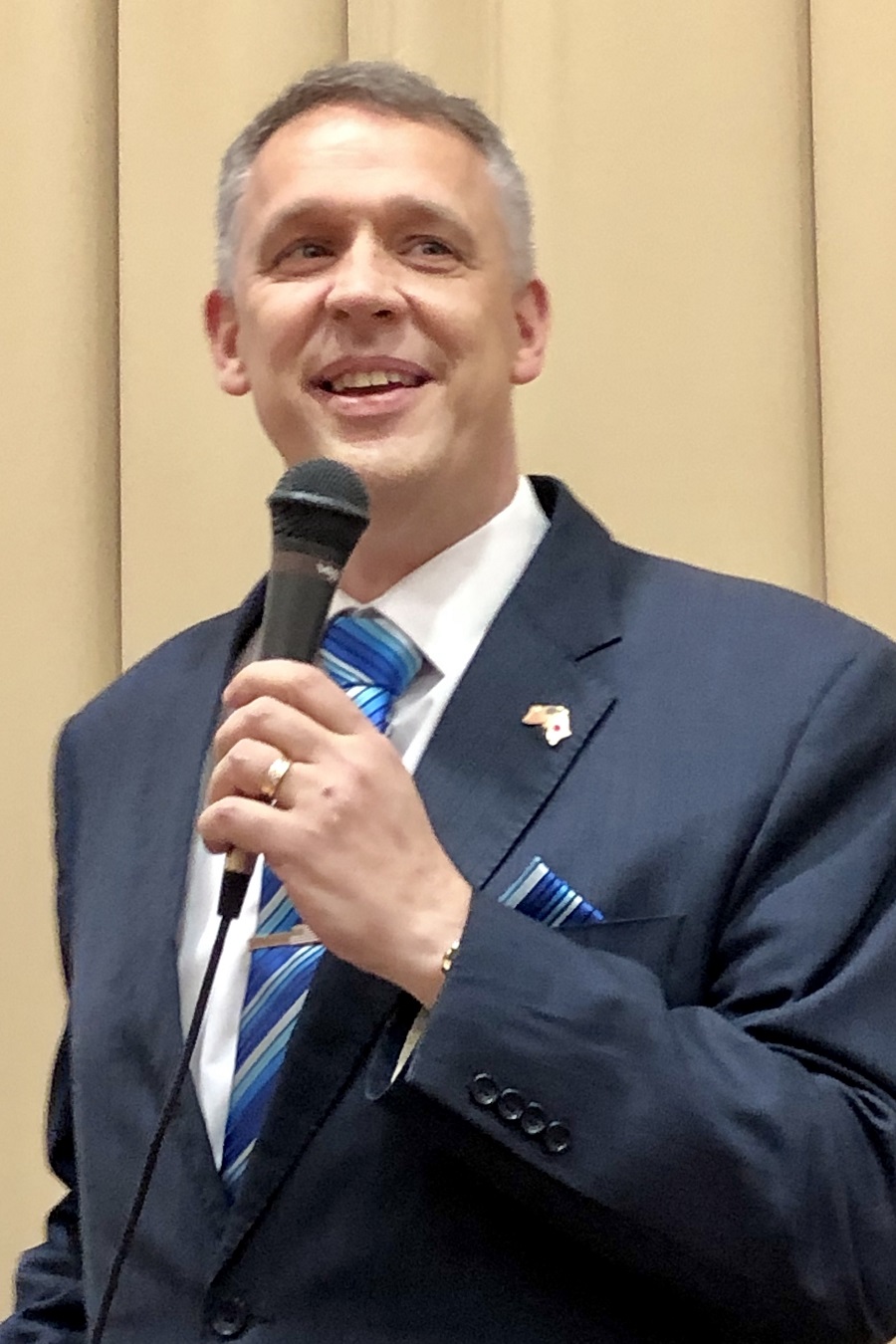 Later, at the shrine run by our dear friends, we talked, laughed, and shared snacks in the room where our children had played so many years before. We were shown a tattered piece of paper on which Susan had written a recipe for banana bread in 1998. Our friend had used it to bake “banana cake” for her four children’s birthdays every year, and she presented us with a special 30th anniversary banana cake. We were even more deeply moved when the family gave us shrine charms commemorating “Good Couple Day,” November 22. Unaware of its auspiciousness, we became a couple on that day in 1988 and are thus a “Good Couple,” or ii fufu. Tears flowed as years of struggle and joy for our two families merged and made time disappear. 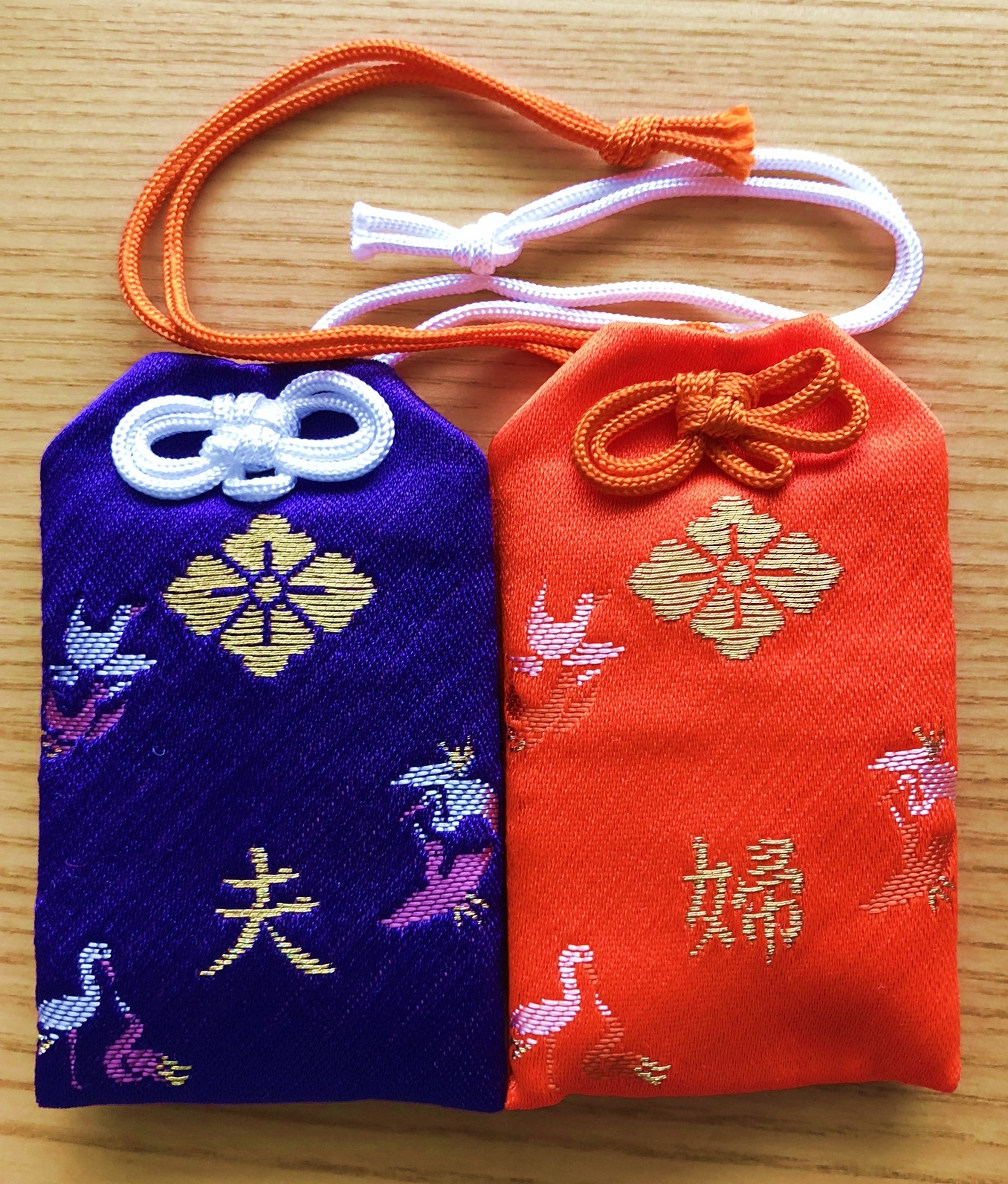 The next day we behaved like tourists, visiting the old samurai houses, taking many pictures, and stopping at one of our favorite old haunts, a 100 yen shop! That evening, at our welcome party, we could clearly see, perhaps for the first time, just how much our old community had suffered while we had been running around the world. The town’s population is aging and diminishing as families have fewer children, and young adults move away. The people fear for their way of life. The festivals and the samurai houses can only continue if the town has a thriving population.

As the evening came to a close, it began to dawn on us that there was much more at play than we could have imagined. Our friends saw in us a memory of happier times when the town felt more prosperous. Perhaps they even see, reflected in our love and admiration for the town, a glimmer of hope to cling to when it feels like their magical festival music may not be far from sounding its final notes.

On our final morning, our host showed us another copy of the banana bread recipe that Susan had written out for her. Such a strange and wonderful mark we left on local birthday traditions with two large families celebrating with Susan’s “banana cake.” We set out looking for some of the kabazaiku (cherry bark crafts) and Shiraiwa-yaki pottery for which Kakunodate is well known. Before heading for the train station, we visited one more friend, our former Japanese teacher, who now teaches Japanese as a foreign language to residents from China, South Korea, the Philippines, Vietnam, and Cambodia.

A recording of the beloved festival music heralded the Komachi Shinkansen as it pulled into Kakunodate station. As friends waved from the platform, we departed, laden with our shopping goodies, new memories, and deep thoughts about what it means to “go home”.