American colleges and universities are experiencing a surge in the number of undergraduate students earning degrees in environmental science. They are interested in improving the environment and attracted to the jobs in the strong green-tech sector in the United States.

Data from the U.S. Department of Education shows a steady uptick over five years. In the 2017–2018 school year, the most recent year for which aggregate data is available, a total of 6,697 students earned bachelor’s degrees in environmental science. That means 1,155 more graduates earned such degrees than did five years earlier. 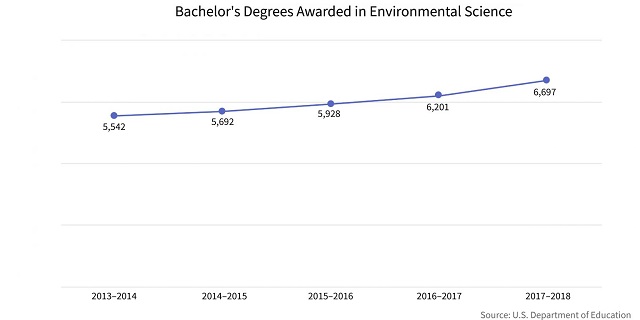 The trend is illustrated by Indiana University Bloomington’s Paul H. O’Neill School of Public and Environmental Affairs, where protecting the environment has been a priority since the school’s 1972 founding. The school promotes recycling, uses sensor-operated water refilling stations, offers a sustainability scholars program and operates its graduate center in a building certified as “gold” under the LEED rating system for sustainability and resource-efficiency.

R.J. Woodring, its associate dean of educational programs, sees a rise in all three of the school’s related majors — environmental science, environmental and sustainability studies, and environmental management. In spring 2020, a total of 341 students earned degrees in those three areas, Woodring says. Four years earlier, that number was 200.

“They’re just pretty aware of what’s going on around them, and the environment is certainly one of those issues,” Woodring says. “They want to make sure they have clean air, clean water, nice parks and natural resources for them and their children.”

Postgraduate plans for these graduates include working for the Indiana Department of Resources or pursuing graduate work in the subject, with the goal of working in labs or doing fieldwork.