By Maureen Gregory and Lauren Monsen

In 1940, the U.S. Department of State launched its first international exchange by inviting 130 Latin American journalists to visit U.S. newsrooms.

That first exchange led to the establishment, in 1946, of the Fulbright Program, which awards 8,000 fellowships annually to qualified applicants from the U.S. and elsewhere.

In 1961, the State Department’s Bureau of Educational and Cultural Affairs was launched to oversee all of the U.S. government’s academic, cultural, sports and professional exchange programs. Since then, exchanges have served 1.7 million students, researchers, educators and scholars who live all over the world. They include:

Today, 30 ambassadors to the United States are alumni of U.S. exchange programs. And three heads of government are exchange alumni. 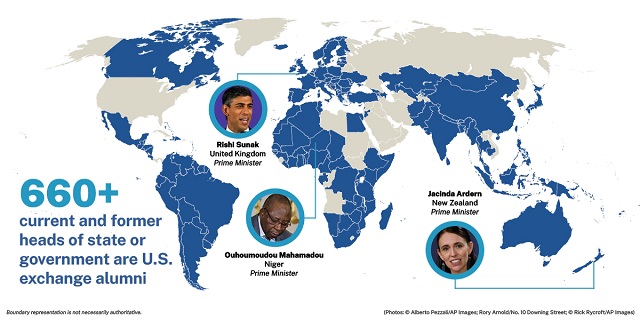 Rishi Sunak, who became prime minister of the United Kingdom in October, received a Fulbright Foreign Student award to support his pursuit of an MBA degree at the Stanford School of Business in 2005. Studying business in California’s Silicon Valley broadened his  mindset about what is possible, Sunak recently said.

Ouhoumoudou Mahamadou, prime minister of Niger since April 2021, took part in a 2002–2003 Hubert H. Humphrey Fellowship program at the University of Minnesota, where he studied administration and policy analysis.

Jacinda Ardern, prime minister of New Zealand since 2017, participated in the International Visitor Leadership Program in 2012, while she was a member of Parliament. Her two-week-long U.S. travel itinerary included stops in Washington; Austin, Texas; Dallas; and San Francisco, where she met with foreign policy experts.

Learn more about U.S. exchange programs and how to apply as a U.S. citizen or non–U.S. citizen.