Beyond the Crisis: A Podcast Highlights Uyghur Culture

When Mukaddas Mijit first arrived in Paris in 2003 from Xinjiang, China, to study music, few people she met knew about her Uyghur culture or tradition. She wanted to change that.

Since then, Mijit has used her talents as an academic, filmmaker, artist and podcaster to support Uyghur culture in Europe and to share Uyghur stories and traditions with people around the world.

Uyghurs are a Central Asian ethnic group with a distinct culture and language who live predominantly in Xinjiang, an autonomous region in the northwestern corner of China (PRC).

Mijit, a dancer and musician by training, worked to bring Uyghur musicians to international music festivals in France. She then pursued a doctorate in ethnomusicology at the University of Paris Nanterre, where she studied the staging of traditional dance and music.

Her research took her back to Central Asia numerous times, but she eventually settled in France, where she now lives with her husband.

Last year, in partnership with the U.S. Embassy in Paris, Mijit also launched an English-language podcast called WEghur Stories. The podcast is co-hosted by John Bair, an American writer and storyteller. Mijit hopes the podcast will help people relate to the Uyghurs and connect with them through art. 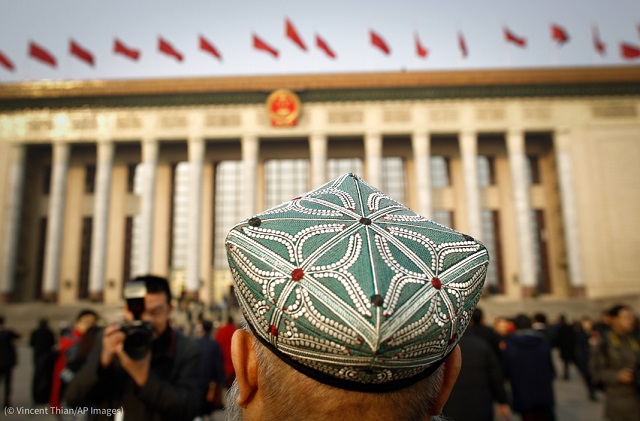 The Chinese government campaign to assimilate Uyghurs, such as this man in Beijing in 2012, into Han Chinese culture aims to deprive Uyghurs of their past. Limited Uyghur cultural traditions are preserved for tourism. (© Vincent Thian/AP Images)

Uyghur language, culture and religion are more similar to those of the Uzbeks, Kazakhs and other Central Asian ethnic groups than to those of China’s majority Han.

Mijit said she wants people to know about Uyghur history, art and contributions to the world, not just the Chinese government’s abuses against Uyghurs. The stories Mijit shares on the podcast cover all walks of life, from contemporary music to advocacy to film to the history of the Uyghur language.

Through these stories, Mijit says, she wants to show that Uyghur art is still evolving. “Culture is a moving thing. It evolves all the time. It changes in a million different shapes,” she says.

The WEghur Stories podcast brings a dynamic view of Uyghur culture to a wider audience. Yet what is happening in the Uyghur homeland is never far from the surface. 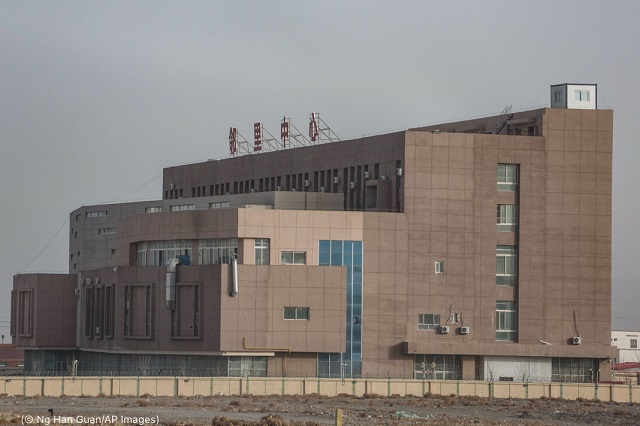 The PRC forces Uyghurs to give up their culture and religion in internment camps like this one, seen December 3, 2018. (© Ng Han Guan/AP Images)

Since 2017, the PRC has imprisoned more than 1 million Uyghurs and other ethnic minorities in internment camps. Survivors report that detainees inside the camps are tortured, forcibly sterilized, and made to renounce their religion and culture.

“Putting a million people in camps, it’s so unbelievable … people cannot see themselves in it, they cannot find any connections with these numbers and the suffering,” Mijit explained. With the podcast, she said, she hopes to show that these people also have “amazing stories.”

The media attention on Uyghurs focuses on “reeducation camps or concentration camps, genocide, … or crimes against humanity,” Mijit says. While acknowledging the importance of that conversation, she added, “I wanted to create a space where we can talk about real people’s experience outside of [our] homeland.”

“It’s really, really disturbing to feel like a victim,” she says. She wants her podcasts to connect people with Uyghurs “as if that’s their friends or their family.”

Many Uyghur artists are uncomfortable speaking in public about their art since their friends and family still live under PRC control, and some worry about the PRC’s reach abroad. Mijit, whose family lives in Australia, is careful to protect her guests. Of those who do appear on the podcast, some use pseudonyms, a common practice in the Uyghur diaspora. 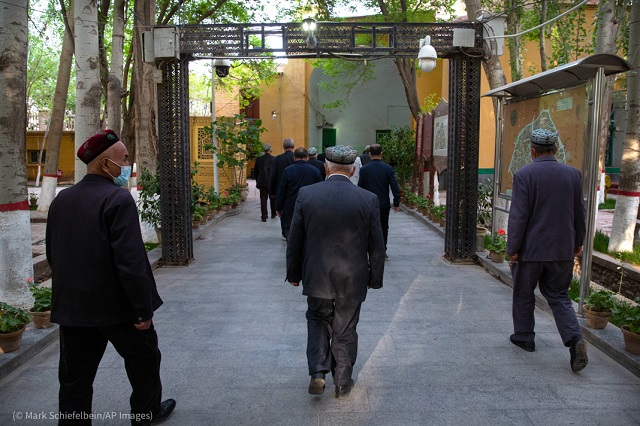 The Chinese government has turned Xinjiang into an open-air prison, with surveillance cameras monitoring people 24 hours a day. Cameras are especially prevalent outside mosques, as seen here in Kashgar, Xinjiang, in 2021. (© Mark Schiefelbein/AP Images)

Still, Mijit hopes that her work is helping to expand the conversation around Uyghurs and to show that they have agency over their lives.

I want people to realize that Uyghurs are not “just being the victims of the world, but also [can] be the creators of the world,” she says.

To learn more about the Uyghur diaspora and listen to the podcast, visit WEghur Stories.

Banner image: With her latest project, "WEghur Stories," Mukaddas Mijit — seen here near her home in the French Alps in 2021 — builds on nearly 20 years of sharing Uyghur art and culture with the world. (Courtesy of Mukaddas Mijit)