Marco Pizarro, a 19-year-old computer science major at Stanford University, is spreading his passion for coding to his peers in the agricultural community where he grew up.

Pizarro hopes to build on the Harvest Hacks hackathon he held before the pandemic, in which 300 middle- and secondary-school students from California’s Salinas Valley spent the day coding and learning about opportunities in the high-tech industry.

“There are so many opportunities in Silicon Valley for students if they want to get interested in computer science and tech fields, but there’s really not in a rural area like Salinas,” he said. “So we thought we would bring that here.”

Pizarro grew up in Salinas Valley, a predominately Hispanic community made up of agricultural workers and their families, an area known as the “salad bowl of the world.” Many residents work in the fields that produce lettuce, spinach, grapes and strawberries or in the packing sheds where harvests are prepared for shipment.

For the hackathon, Pizarro partnered with Google, the Hispanic Heritage Foundation and the local school district.

Helping the children of farm workers

Pizarro got hooked on computer science when he was a boy. He knows he is lucky that his family could send him to hackathons all over the U.S. Many in his community, only 96 kilometers from Silicon Valley, cannot afford to give their children such exposure to information technology. It’s a fact that motivates Pizarro — in his studies and in his desire to help younger students to learn computer languages. 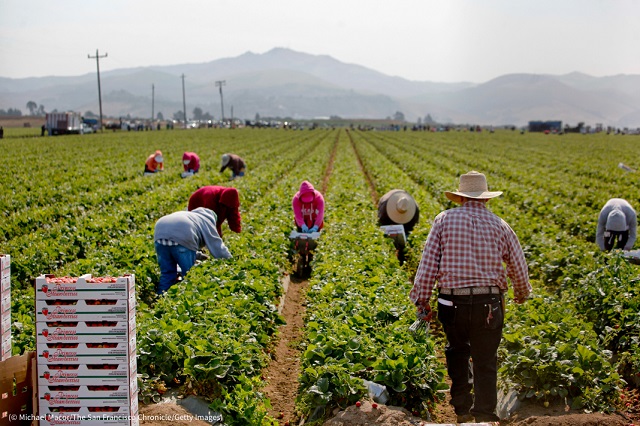 Of the nearly 3 million agriculture workers in the United States, some 83% are Hispanic, according to the National Center for Farmworker Health. It is a demographic that is the backbone of America’s agriculture.

Harvest Hacks encouraged student coders in Salinas Valley farm worker families to solve real-life harvesting problems. One team created an algorithm that identifies — and helps treat — diseases in tomatoes. A few students launched a game that teaches agricultural basics and how to care for plants.

“Agriculture tech is a huge thing in Salinas, and it’s only growing,” Pizarro said. Coding “is a great opportunity for our students to get involved.”

“What [students] need is the connectivity and confidence and support, but ultimately, they know what’s best for our community … and at some point, we just have to get out of the way,” said Antonio Tijerino, president of the Hispanic Heritage Foundation and a supporter of Pizarro’s efforts.

Pizarro had to postpone the 2020 Harvest Hacks hackathon because of the pandemic, but he is busy planning the next one, which he hopes to hold later in 2021.