Christmas at the White House holds traditions special to members of the first family who live there and to the tens of thousands of guests who visit the Executive Mansion during the holiday season.

The first lady plays a critical role in the behind-the-scenes Christmas preparations, including selecting that year’s overall theme and decorations.

Before the 20th century, first families decorated the house modestly with greens and celebrated privately with family and friends, according to the White House Historical Association, which tracks the themes and images of past Christmases.

Today, planning Christmas at the White House takes a year but only five days to execute. The goal is to “capture a sense of the American spirit,” former White House florist Laura Dowling explained. The White House expects to welcome approximately 50,000 visitors during the 2022 holiday season.

Here’s a look back at some of the traditions and decor first ladies brought to the White House. 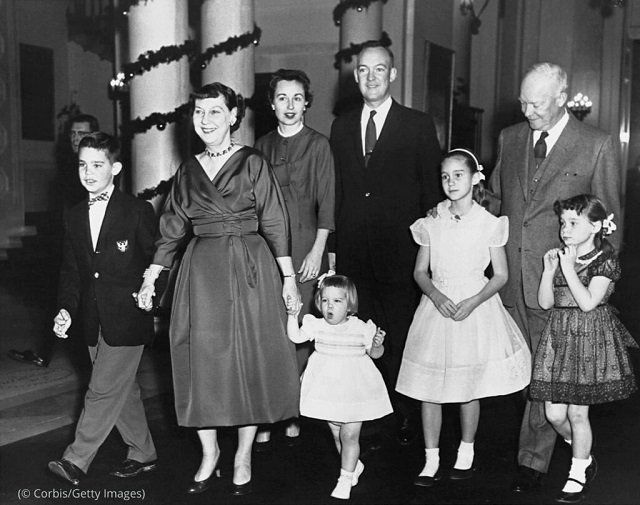 First lady Mamie Eisenhower was not the “first” first lady to decorate the White House for Christmas, but she took it to a whole new level, adding Christmas trees, poinsettias, wreaths and holly throughout the home.

In 1961, first lady Jacqueline Kennedy began the tradition of selecting a theme for the official White House Christmas tree. She decorated a tree placed in the Blue Room with ornamental toys, birds and angels modeled after Pyotr Tchaikovsky’s The Nutcracker ballet. 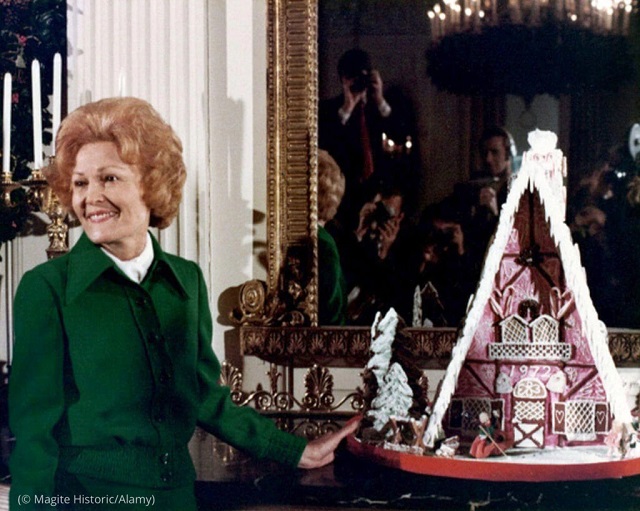 The tradition of displaying a gingerbread house in the White House at Christmas began in 1972 with first lady Patricia Nixon. The first gingerbread house weighed in at 18 kilograms, including nearly 3 kilograms of icing to hold the confection together. 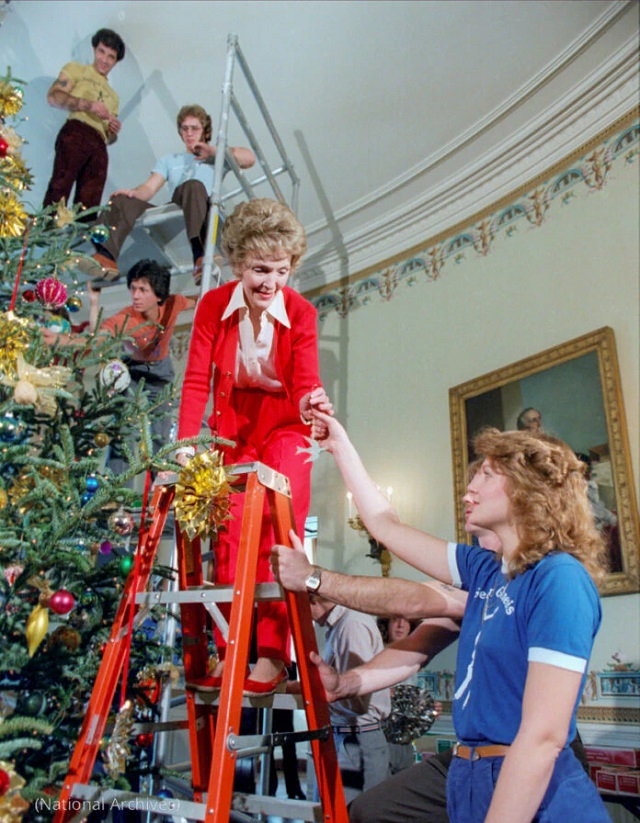 In 1982, first lady Nancy Reagan arranged for groups of teenagers involved in Second Genesis, a drug treatment program in Washington, D.C., Maryland and Virginia, to make foil paper cones and metallic snowflakes for the tree. 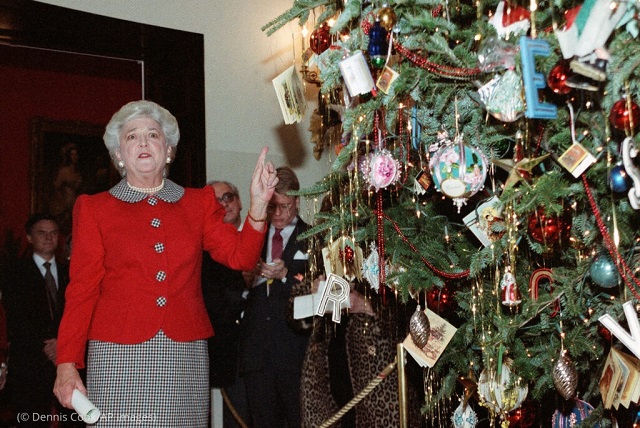 First lady Barbara Bush chose children’s literacy as the theme for the 1989 Christmas tree. It included 80 soft-sculpture characters from popular storybooks. She championed literacy throughout her husband’s tenure and after. 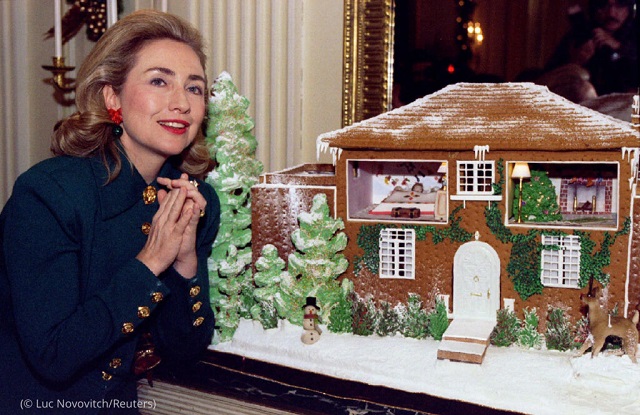 The White House chef surprised first lady Hillary Clinton in 1995 with a gingerbread house that replicated her childhood home in the Chicago suburbs. (© Luc Novovitch/Reuters)

In 1993, first lady Hillary Clinton invited artisans to make ornaments from fiber, ceramics, glass, metal and wood to showcase the “Year of the American Craft.” In 1995, students made nearly 3,500 ornaments related to the poem A Visit From St. Nicholas, which begins, “‘Twas the night before Christmas …” 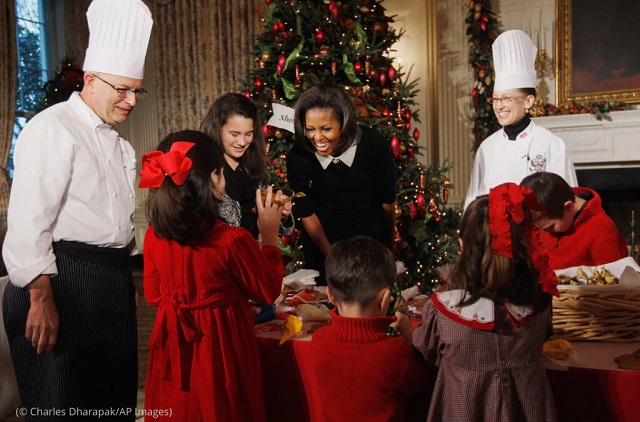 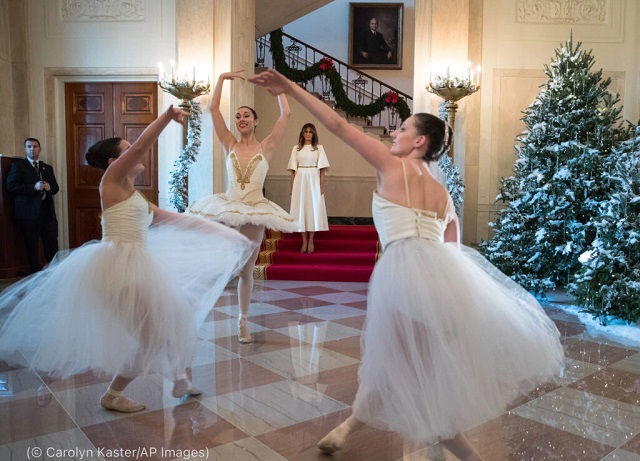 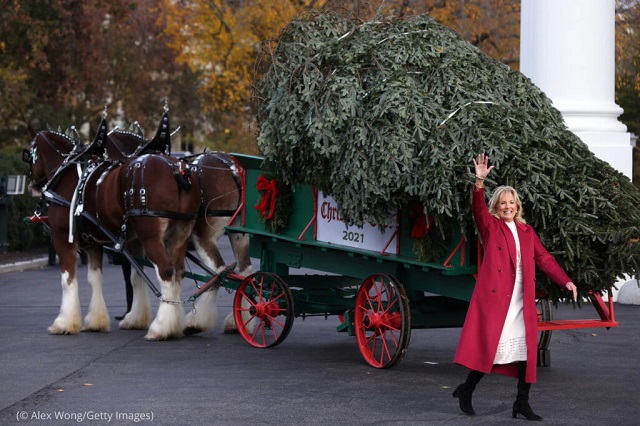 Jill Biden has continued the tradition that began in 1966 of the first lady inspecting the official indoor White House Christmas tree as it arrived at the North Portico via horse and carriage. Each year, U.S. growers select the tree as part of a national tree contest. The 2021 tree came from North Carolina.