Frederick Douglass: A Symbol of Freedom beyond America’s Shores

Students across the U.S. have long studied the astonishing story of how Frederick Douglass escaped from slavery and used the power of his voice and pen to help end slavery. But the impact of his story stretches beyond American shores.

More than two centuries after his birth into slavery on a farm in Maryland, Douglass has inspired writers from India, Nigeria and Ireland who have incorporated him as an important figure in their work, notes historian David Blight.

Blight, whose new biography, Frederick Douglass: Prophet of Freedom, has drawn accolades, said in an interview that Douglass’ story has “universal elements and qualities: the discovery of literacy, the youthful will to be free [and] find some way to blunt your oppression and imagine your way out of it.”

Much like the name of Nelson Mandela, Douglass’ name “is a byword for freedom,” says Irish writer Laurence Fenton.

Nigerian novelist Chimamanda Ngozi Adichie’s Half of a Yellow Sun, about the Biafran civil war, revolves around a poor houseboy turned soldier who discovers Douglass’ Narrative of the Life of Frederick Douglass, an American Slave, hidden behind a blackboard and writes his own book.

A main character in Amitav Ghosh’s Sea of Poppies, a novel on the slave trade in the Indian Ocean, is a sailor who witnesses the beating of Douglass at a Baltimore shipyard, a true incident. 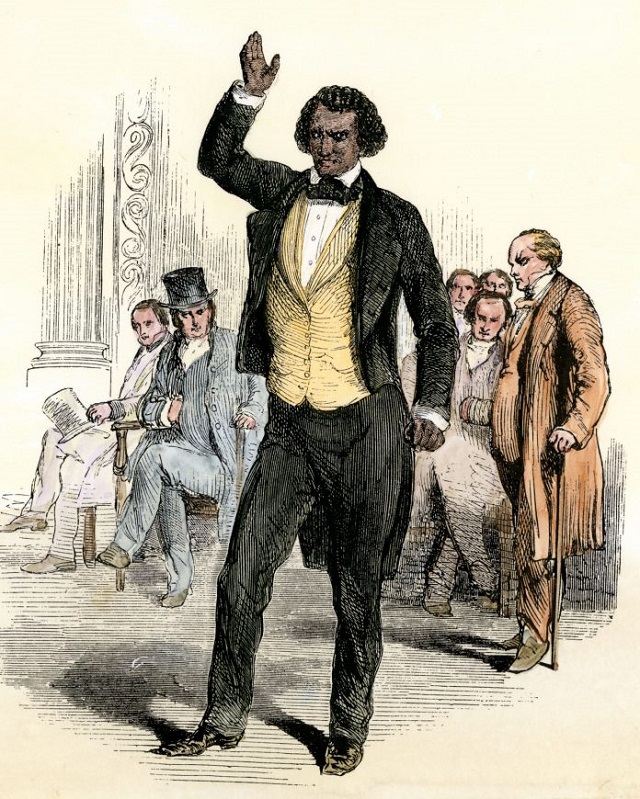 Frederick Douglass drew large crowds across England and Ireland speaking about his own experiences of the brutality of slavery. (© North Wind Picture Archives/Alamy)

Irish novelist Colum McCann’s TransAtlantic devotes a long section to Douglass’ 1845–1846 trip to the British Isles, where he gave anti-slavery speeches and marshaled support for abolition, even while witnessing dire poverty in Ireland at the start of the potato famine.

Born around 1818, Douglass barely knew his mother. He was sent at age 7 to servitude in Baltimore, where he learned to read and soaked up the language of the King James Bible from sermons. Then sent to toil for a brutal farm owner, Douglass failed on his first escape attempt, but on the second, dressed as a sailor, he made his way north to freedom and a place in history.

He perfected the art of oratory giving speeches for William Lloyd Garrison and the New England Anti-Slavery Society, then at age 27 wrote the powerful Narrative, the first of three autobiographies.

Banner image: This statue of Frederick Douglass was unveiled in the U.S. Capitol's Emancipation Hall in 2013. (© Drew Angerer/Getty Images)