From Silicon Valley to the American Heartland

American entrepreneurs are on the move. Although historically centered around Silicon Valley and the East Coast, the modern map of entrepreneurship is starting to shift, as companies and innovators move inward toward the heartland.

U.S. states primarily known for their agricultural industries, such as Indiana and Nebraska, are becoming known for their hubs of innovation, with high rates of startup growth and growing networks of business owners and entrepreneurs. 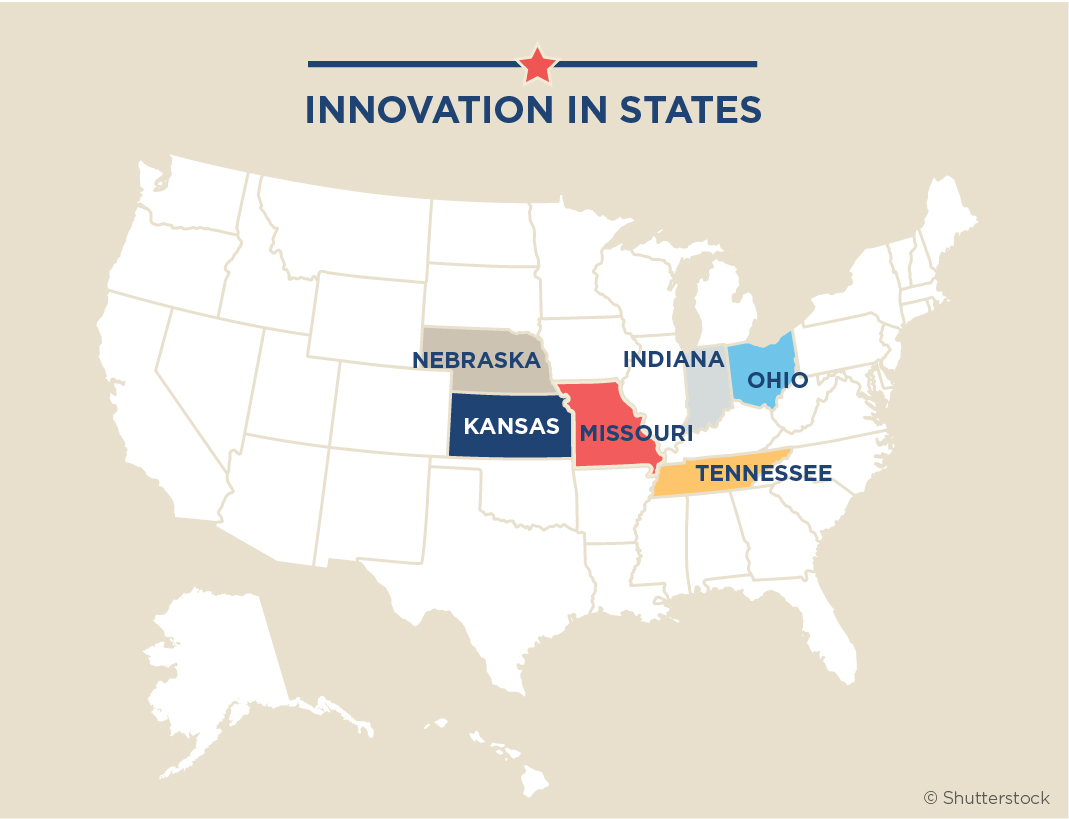 “While Silicon Valley, Boston and New York tend to grab the national headlines, other areas in the country have been flying below the radar, quietly growing their ecosystems and nurturing entrepreneurial activity in their backyards,” said Bobby Franklin, president of the National Venture Capital Association, an international trade consulting firm.

The association works with the Kauffman Foundation, a nonprofit based in Kansas City, Missouri, and ranks U.S. cities on their entrepreneurial growth. Top cities include Columbus, Ohio; Nashville, Tennessee; and Indianapolis, Indiana. Check out what these and some other cities are doing to promote innovation and entrepreneurship:

The capital and largest city of Ohio topped Kauffman’s list in “share of scale-ups,” which refers to the number of companies that start small and grow to at least 50 employees within 10 years. Columbus continues to encourage this growth with its Small Business Program, which offers free professional-development training for small businesses and their employees.

The city might be known best for its Indianapolis 500 car race, but the state’s largest city and capital is making a name for itself in the technology industry. The state is investing $1 billion over 10 years in innovation and entrepreneurship under a 2016 plan proposed by then-Governor Mike Pence, who is now the U.S. vice president.

The city is home to Facebook Inc.’s newest data center and has had success in connecting the entrepreneurial community through outlets like the Silicon Prairie News, an online publication for tech innovation in the Midwest. Host of the Big Omaha Conference — which brings together small-business founders, investors and emerging leaders — the city has become a central location for innovation, in addition to being geographically central to the United States.

Fans of country music know of Nashville, but this state capital is increasingly known as an emerging tech hub. Tennessee offers a variety of grants and resources to small businesses through the Nashville Entrepreneur Center’s advisory program, which connects young entrepreneurs with experts in their industries.

Startups in St. Louis have access to $5 million in seed money through the Spirit of St. Louis Fund and training and technical assistance through the Missouri Small Business Development Center. The city also offers affordable incubator and co-working spaces.

Kansas’ largest city regularly ranks in the top five cities for starting a company, based on the low cost of starting a business and the availability of space. These low barriers are not the only reason Kansas is on the innovation map, nor is Wichita the state’s only entrepreneurship hub. According to a report from the Center for American Entrepreneurship, Kansas City is far ahead of other cities in the region when it comes to funding female entrepreneurs.

Industry leaders agree that initiatives like these are essential to support entrepreneurial growth throughout the country.

“Silicon Valley didn’t become Silicon Valley by luck, accident or because the water there made people smarter,” said Dustin McKissen, founder of Missouri-based consulting firm McKissen and Company and a contributing columnist for Silicon Prairie News. Tech growth in the Santa Clara Valley, just south of the San Francisco Bay and now referred to as Silicon Valley, was a result of funding and investment, he says, and the same investment is happening today in the middle of America.