One of my earliest memories is my Japanese grandfather telling me the legend of Urashima Taro as a way of explaining Einstein’s theories of special and general relativity. When the fisherman returns to his village after visiting the Dragon Palace of Princess Otohime, he believes he has only been gone a few days, but then he realizes it has been decades.

This is what would happen to anyone traveling away from the Earth at relativistic speeds, my grandfather explained to me. Upon returning, the spaceman would only have experienced perhaps a few hours, but everyone he knew on Earth would most likely be long gone. I never found the story sad, perhaps because I was too fascinated by the prospects of space travel and the bending of time. Or maybe I was too busy trying to wrap my grade-school-aged head around Einstein's theories.

That story relates to me in another way, as members of my family over several generations have left and returned to Japan, and I’ve done so myself several times. Given my roots in Japan, my sincere hope when I took up my post three years ago as Deputy Principal Officer at the U.S. Consulate General Naha was to use my unique experiences and family history to contribute to the U.S.-Japan relationship.

I was born in 1975 in a place in Southern California called Goleta, near Santa Barbara. English was always the language we used at home, but I also spent time with aunts, uncles, and cousins who mostly spoke Japanese to my father, grandfather, and grandmother. As a result, I was exposed and accustomed to the sound of Japanese from a young age. I also spent summers in Japan when I was 3, 6, 9, and 11 years old. When I visited Matsumoto Castle with my father and grandfather one summer, they told me, “We have our roots near here,” and I have been aware of my connection with Japan ever since. 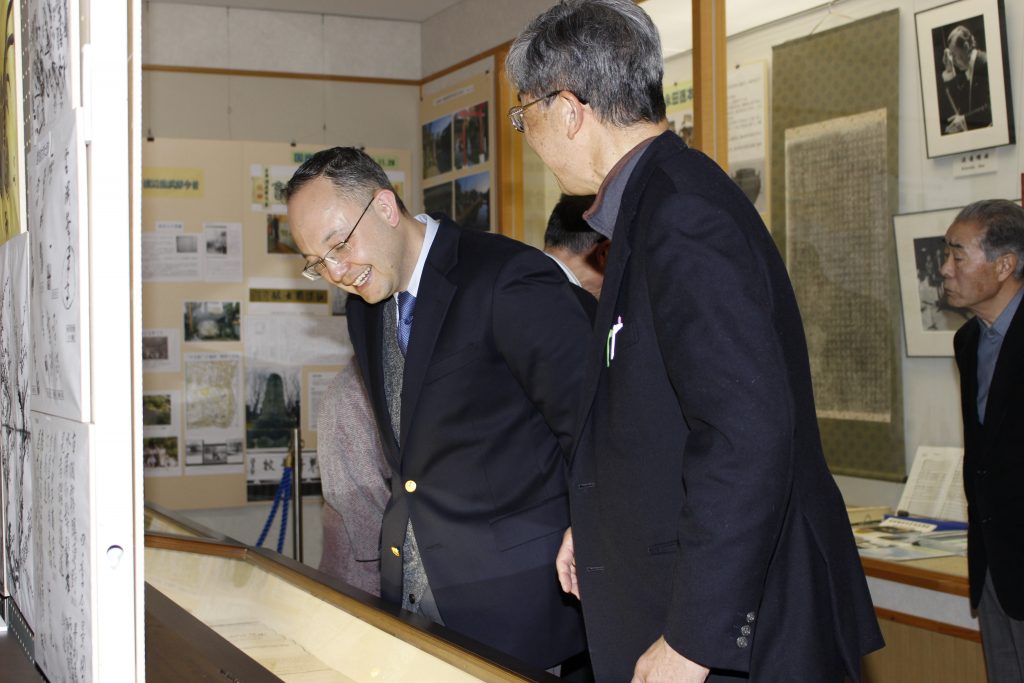 Hilary Dauer (left) observes an exhibit of paintings by his great-great-great grandfather Onozo Watanabe at the Old Watanabe Family Residence in Okaya in March 2016.

What stands out most from my early visits, however, are the vibrant colors of Tokyo – the neon street signs and the colorful taxis, cement mixers, and even garbage trucks. More than anything else, though, I remember the trains. In the 1980s, the commuter trains of Tokyo were not the boring chrome with one stripe of color that they are now. Rather, they were bright green, blue, orange, yellow, and red. Compared to the drab chaparral earth tones of a small California town, Tokyo felt like another planet.

From the age of thirteen, I lived in Tokyo for two years when my father taught at International Christian University and served as director of the University of California Study Center. During that time, I attended Nishimachi International School. Though instruction was in English, Japanese was a required, daily course.

In many ways, my only goal after returning to Santa Barbara at age 15 was to get back to Tokyo. I almost felt like the only point in going to college was to study in Japan. And, I did! From 1995 to 1996, I returned to Tokyo as an exchange student at International Christian University, where my father had worked.

A Physicist’s Interpretation of Urashima Taro

My grandfather studied physics in Paris on a scholarship from the French government beginning in 1933. There, he met my grandmother. In 1937, the two of them moved to Leipzig, Germany. Two years later, my father was born on August 17, as Germany was preparing to invade Poland, beginning the Second World War in Europe. Hoping to avoid the deprivation and ravages she remembered from the First World War in Germany, my grandmother agreed to move to Japan with my grandfather. So, at only a few weeks of age, my father moved to Japan, where the three of them spent the duration of the war.

After the war, my father and his parents moved to America. My father was naturalized in 1954, shortly after my grandmother. My grandfather, however, retained his Japanese nationality even after he moved to the United States and was very proud of being Japanese. He had a  particularly strong influence on me – not only introducing me to science but making me conscious of my Japanese identity.

After leaving ICU, I studied political science at the University of California, San Diego, and then earned a master’s degree in international relations from Yale University. When I was a university freshman, a State Department Foreign Service recruiter came to UCSD to explain what it meant to be a diplomat. I was attracted to the occupation because diplomats can live adventurous lives while serving their country. I was also led along this line of thinking by one of my uncles who was an Ambassador in the Japanese Foreign Service. I joined the State Department in November 2003. Before Japan, I served in India, Syria, Iraq and Indonesia, as well as Washington, DC.

Having been in Japan for several years now, I realize that when we talk about the steadfast ties between the U.S. and Japan as allies, it’s more than just a catchphrase. The steadfast ties are ties of blood – not just for me but the scores of other Nikkei who serve in the State Department or military, or work in other facets of the relationship. Since we have Japanese roots, we are connected not just at the government level but also at the personal level. I think of the bilateral relationship like a big family, and that motivates me in my work.

In Okinawa I’ve strived to use my experience and background to serve as a bridge between the  U.S. service members stationed there and the people of Okinawa. Reconnecting to the town of Okaya in Nagano, where my ancestors are from, has helped me to understand the importance of participating in local festivals to become part of a community. For instance, the area surrounding Okaya is known for the Onbashira Matsuri, in which people ride felled trees down steep inclines. It’s not for the faint of heart, but it does give me a way to connect with the people of Okinawa when they tell me about the Eisa dance festival in Okinawa City or the traditional tug-of-war in Naha and Yomitan. I want to honor the people of Okaya and the values of that small town by building bridges with the cities and towns in Okinawa that host the U.S. military. 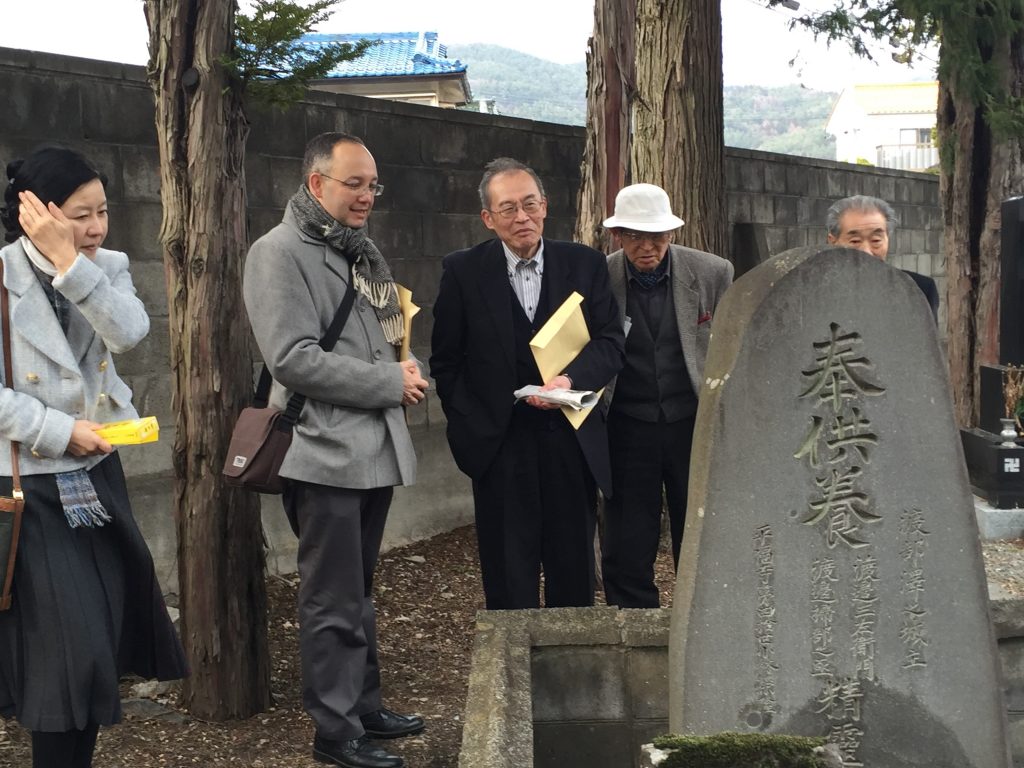 Hilary Dauer pays his respects to a distant ancestor at Heifukuji, the Watanabe family temple in Okaya.

As I approach the end of my time in Okinawa, I reflect more and more on relativity theory. My understanding of relativity is that the passage of time seems to flow differently in one location relative to another due to the effects of movement, and gravity. My first visit to Japan was at age 3. Now, over 40 years later, and despite all the experiences I have had in life, it seems like no time at all has passed. It seems like just yesterday that I was a kid playing in the parks of Tokyo. Roughly speaking, in relativity theory, gravity warps spacetime. So, in a way, the "gravity" of the attachments to family drew me back to Japan and compressed the perception of the passage of time. The same was the case with my father, grandfather, and other ancestors as well.

Banner image: A shot of Lake Suwa in Okaya taken by Hilary Dauer when he last visited the area in 2019.