How Do Journalists Win Pulitzers?

There is arguably no higher honor in American journalism than the Pulitzer Prize.

Given annually since 1917, Pulitzer Prizes recognize reporting that holds powerful people, businesses and institutions accountable, journalism that has often led to to new policies, changed laws or even saved lives.

“The Pulitzer Prizes don’t honor celebrity puff pieces, you know. They honor serious journalism that more often than not is afflicting the comfortable and comforting the afflicted,” says Kathy Kiely, a professor at the Missouri School of Journalism and a former Pulitzer judge.

The prize gets its name from Joseph Pulitzer, a newspaper publishing magnate whose will established the prize to recognize journalistic excellence. (He also bequeathed money to create the Columbia University Graduate School of Journalism, which administers the Pulitzers.) At first, there were just two categories for Pulitzer Prizes in journalism, and two others for creators of books, drama or music.

Starting in December, individuals and American publications upload their best work from the same calendar year to a website. Submissions cost $75 each, and they’re due January 25.

Each February, a jury of 84 judges starts reviewing the submissions. Judges are esteemed academics and journalism professionals, including writers, editors and publishers. In terms of selecting judges, “we try for regional diversity, we try for ethnic diversity, gender diversity, we try to pick from around the country,” says Bud Kliment, the prizes’ deputy administrator.

In recent years, judges sifted through 1,100 submissions. An audio-reporting category added in 2020 will likely bump that number up this year, Kliment says. In the end, judges vote for their top three picks in every category.

After judges name the finalists, the 19-member Pulitzer Prize board meets for two days in April to select the final winners. The board is primarily composed of leading journalists or news executives from American media outlets plus a few academics or people in the arts. Each April, the Pulitzer Prize administrator announces the winners at a news conference from the Columbia University Graduate School of Journalism.

Large American publications tend to dominate the winners — in 2020, The New York Times received three, including for a series that showed how New York City’s taxi industry exploited vulnerable drivers. But judges recognize work from smaller, local outlets as well. 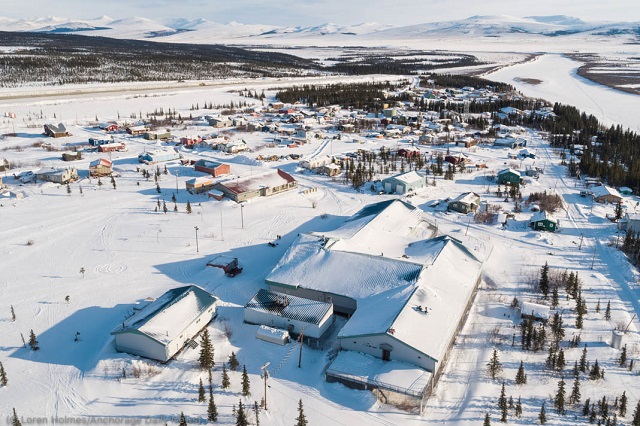 The northwest Alaska village of Kiana is shown March 14, 2019. The school (foreground) and airport are large infrastructure projects supported by the state, which struggles to provide a consistent local law enforcement presence in the community. (© Loren Holmes/Anchorage Daily News)

Last year, for example, the Anchorage Daily News (with contributions from ProPublica) won the most prestigious Pulitzer, the public service award. It is the only one that carries a gold medal. The paper won for a series that shows a third of Alaska’s villages don’t have police protection, among other revelations. Four other small media outlets won Pulitzers last year.

In 1986, Mary Pat Flaherty was nine years out of journalism school when she and another reporter at the now-defunct Pittsburgh Press won a Pulitzer. Their winning series showed how — despite the fact that organ transplants are supposed to go to people who need them the most — certain laboratories acted as go-betweens for wealthy individuals who wanted kidneys and impoverished people who would sell them.

The series led to increased transparency and standardization in organ donations worldwide.

Coming from a small newspaper and still relatively new in her career, Flaherty was stunned to win. “My mouth was just hanging open,” Flaherty, now an editor at The Washington Post, says. “There can be no doubt that it was wonderful and shocking and jaw dropping.”

The Pulitzer Prizes grab headlines when they’re awarded, which says something about how Americans value journalism, says Kiely, the Missouri professor and former judge. She sees the awards as an embodiment of the First Amendment to the U.S. Constitution, which protects freedom of the press and expression.

Banner image: Taxis wait at an intersection in New York on February 22, 2019. Lawmakers plan to investigate the city's role in a crisis that devastated the New York City taxi industry and left thousands of drivers in debt. A report in The New York Times brought the issue to light and won the newspaper a Pulitzer Prize. (© Kholood Eid/The New York Times/Redux)