All eyes will be on the waves as surfing debuts as an Olympic sport in Tokyo this summer.

Competitive surfers credit the late Duke Paoa Kahanamoku, known as the father of modern surfing, with elevating their sport. According to biographer Sandy Hall, Kahanamoku, a legendary Native Hawaiian, was “the greatest” aquatic athlete ever. “The only thing he didn’t do was walk on water,” Hall says.

Kahanamoku was born in 1890 to a family whose members were known for their ocean skills. He himself became a champion Olympic swimmer before popularizing surfing. 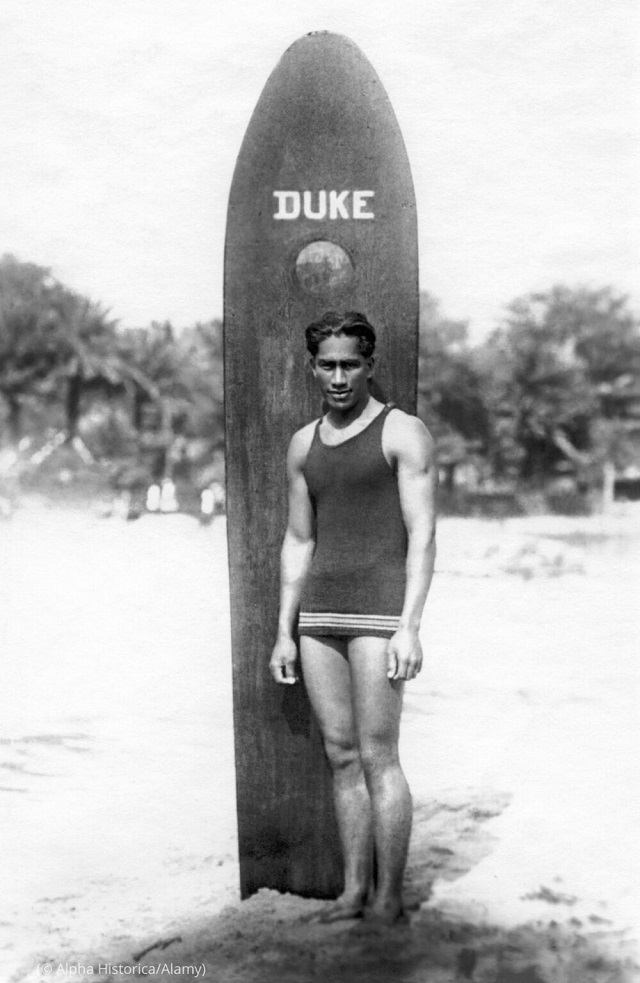 Kahanamoku poses on a Hawaiian beach with his wooden surfboard, circa 1912. (© Alpha Historica/Alamy)

Headlines in 1911 announced Kahanamoku’s world-record 100-yard (91.44-meter) freestyle swim — he had achieved it by introducing more powerful strokes and a flutter kick. His celebrity soared after he won a gold and a silver medal for the U.S. Olympic team in 1912, a time when Hawaii was a U.S. territory.

“The Duke,” as he became known, won five medals (three were gold) over three Olympic Games.

After training in Atlantic City, New Jersey, he returned to the resort town in August 1912 to make good on a promise to run a surfing exhibition.

For three weeks, thousands of people turned out to watch Kahanamoku ride the waves on wooden surfboards. He surfed backwards and did handstands, among other stunts. In June 1913, Kahanamoku helmed three more exhibitions in oceanside California towns, in each, again, making a big impression.

“Anytime Duke surfed, a crowd would gather,” said Matt Warshaw, founder of the Encyclopedia of Surfing and former editor of Surfer magazine. “He was so compelling, he was so handsome, and had this black hair combed back. He … could do this amazing new thing, and he made it look so incredible.”

Kahanamoku impressed crowds a few years later in Australia and New Zealand. But it was a 1925 near-tragedy that earned Kahanamoku a place in many people’s hearts. When a boat capsized in Corona del Mar, California, he used his surfboard to ferry eight people safely to shore. Kahanamoku’s friend Tom Henry recounted the rescue decades later on a 1957 episode of This Is Your Life.

Three times, Duke came back from the wreck to the shore, and each time he brought survivors,” Henry said.

Kahanamoku’s public service extended to serving as sheriff for the City and County of Honolulu for almost three decades. After Hawaii became the 50th state in 1959, Kahanamoku’s popularity as an athlete and Hollywood actor — he had landed parts in silent and feature films — made him a natural choice to become the city’s official greeter. He was credited with spurring tourism there.

“He [was] known for being charismatic, but also very welcoming,” said John Rosa, a history professor at the University of Hawaii at Manoa.

Following his doctor’s advice, Kahanamoku stopped surfing at age 60, choosing sailing as his sport of choice during his advanced years. He died in 1968, at age 77, of a heart attack, leaving a legacy of grace, athleticism and sublime surfing.

Warshaw said he has remained a powerful example for generations of surfers. “Duke was ‘that guy’ everywhere he went,” he said.