U.S. diplomatic missions in the Pacific and beyond are shifting to renewable energy, tackling the climate crisis while helping partner nations meet their environmental goals.

Cutting emissions at the consulate on Japan’s northern island of Hokkaido supports Japan’s pledge, made at the April 2021 Leaders Summit on Climate, to cut emissions by 46% to 50% by 2030.

“This is our way of showing that we stand with the people of Sapporo and Hokkaido, who are also making great strides toward dramatically reducing dependence on carbon-based fuels,” said U.S. Consul General in Sapporo Andrew Lee. “We are very proud to take this step.” 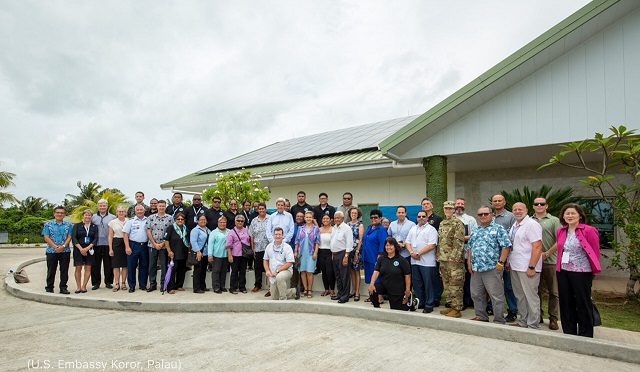 The move responds to President Biden’s December 2021 executive order on federal sustainability, which directs the U.S. government to achieve 100% carbon pollution–free electricity by 2030 and net-zero emissions from federal buildings by 2045, among other goals.

On April 12, the U.S. Embassy in Koror, Palau, announced that new solar panels will provide 100% of the facility’s power, making it the first U.S. Embassy to achieve net-zero emissions. Through renewable energy production and other savings, the embassy will offset 154,000 kilograms of CO2 per year and save $100,000 in energy costs annually.

The embassy will work in partnership with the Palau Public Utilities Corporation renewable energy system to help power the local grid during the day while purchasing power at night.

.@ClimateEnvoy: To meet the challenge, at the Leaders’ Summit in April, the United States announced an ambitious target of reducing our emissions by 50-52 percent by 2030. We do all this knowing full well that no country and no continent alone can solve the climate crisis. pic.twitter.com/tlfJM0AQOh

Consulate General Sapporo and Embassy Koror are among numerous U.S. missions that are helping the environment. Other efforts include these:

Banner image: U.S. embassies in Pacific nations, including Palau (above), are shifting to renewable energy and working with host countries to improve the environment. (© Norimoto/Shutterstock.com)