For two years, Otomo studied in the United States when he was in his early thirties. What impact did studying abroad have on the life of a world leader in the movie industry? I sat down with Otomo to find out the answer to that question and learn about his experience. 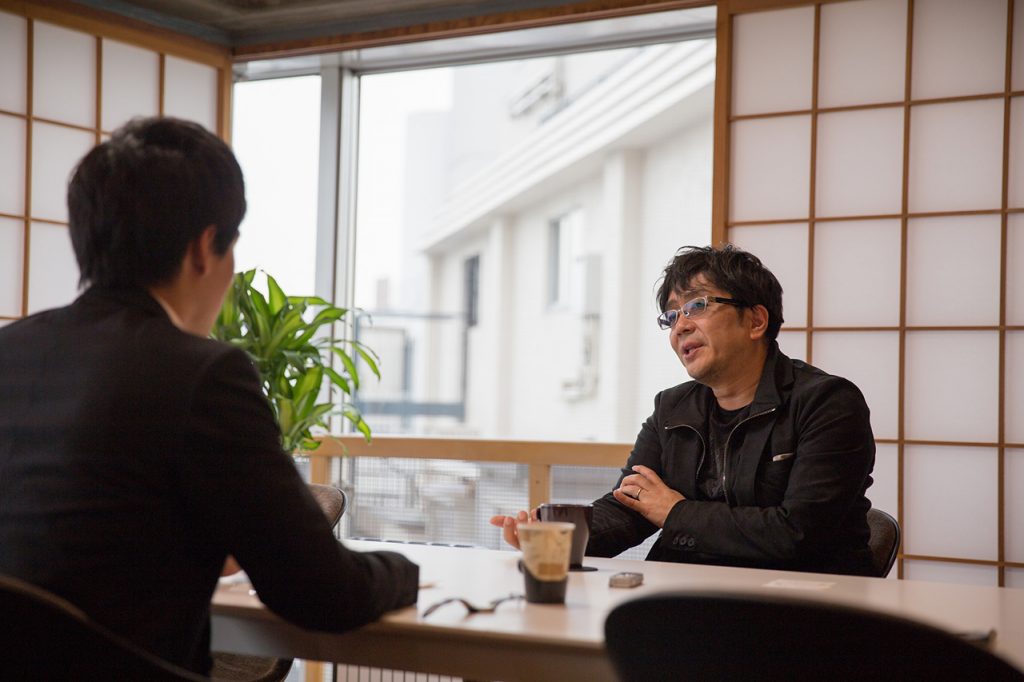 When Otomo was working for NHK in the late 1990s, his supervisor nominated him for a company-sponsored study abroad program. Otomo accepted the offer and headed for Hollywood, the entertainment capital of the world.

Although he spent two years studying at the University of Southern California, he says that what he learned just from living in the United States was just as valuable as what he learned in the classroom. He was very active outside of class, even visiting churches and other places with his family that they hadn’t really been exposed to in Japan. While he went the United States to study filmmaking, he also benefited greatly from learning about American lifestyles and culture, visiting many different places, and talking with diverse groups of people about a wide variety of subjects.

Otomo says that developing new ways of thinking by surrounding himself with American culture and people was the most important thing he gained from studying abroad. He learned how to acknowledge and respect the differences between the racial and cultural backgrounds of the people living in the United States and connect them with his own cultural identity and lifestyle. As a result, he discovered how to pick up on the significance of a single scene in a film, which he had not been able to do before he went to the United States. 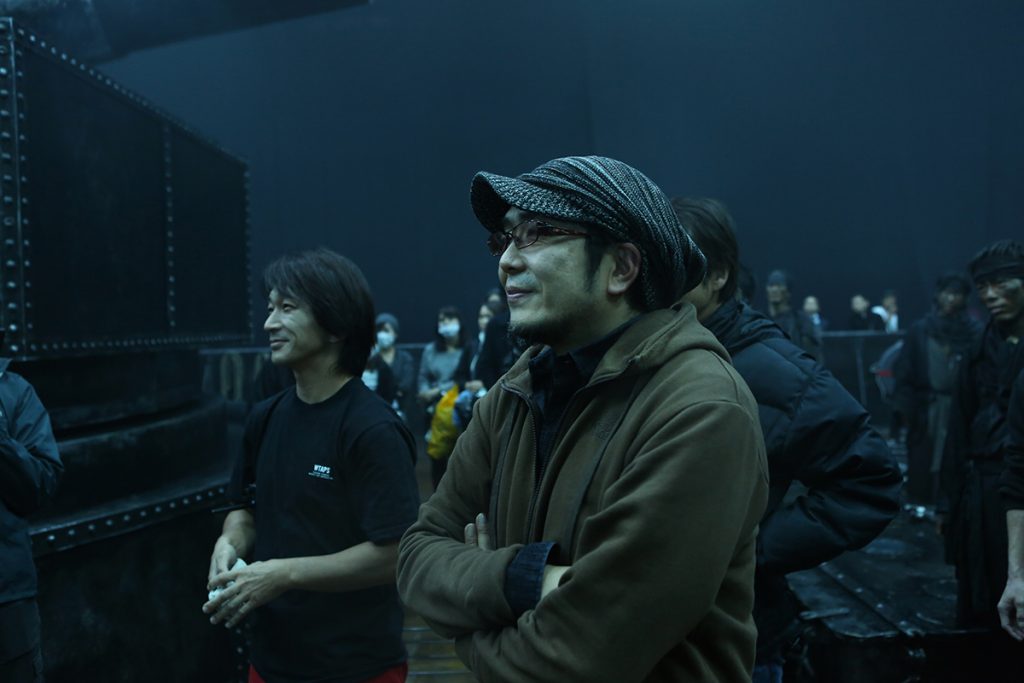 Otomo’s enthusiasm about studying abroad outweighed his fears before he left for the United States. Nevertheless, he wasn’t completely worry-free. In particular, he was nervous about the language barrier. He had assumed he would somehow be able to manage once he got there, but things didn’t go as smoothly as he’d hoped. During a conversation with a group of people, he suddenly realized that it made no difference whether he was there or not because he was unable to express his opinions. Among Japanese, it’s often possible to naturally intuit what others are thinking even if they don’t express themselves verbally. But America is made up of people of different races and cultures, so it’s harder to guess what other people are thinking. Otomo was disconcerted when he realized that if you don’t express yourself, nobody will understand or even notice you.

He knew his situation wouldn’t improve unless he showed that he was trying to express himself, so he started forcing himself to join conversations and speak up in halting English and sometimes even Japanese. Although his language was simple, he made a conscious effort to use facial expressions and gestures to express his feelings. By doing so, he discovered the joy of conveying his ideas and joined more and more conversations. “I realized there was no point in holding back if I wanted to make a go of it in a different culture,” says Otomo about how he felt when he finally broke through the language barrier. “I knew I had to keep striving to express who I was as a person. During those two years, I think I became bolder and more self-assured.”

“It goes without saying that someone who was born and raised in Japan won’t be able to speak perfect English. There’s no need to worry about that,” says Otomo. “The important thing is to make the effort to bridge the culture gap. That can be done through facial expressions, the desire to communicate, and having the courage to ask people to repeat themselves. I came to the realization that this is the basis of communication and it is actually what is most important in conversation regardless of whether the participants come from different countries.”

In addition to trying to express himself in English, Otomo was struggling to respond to questions about his own identity.

In Japan, he could introduce himself by simply saying “I’m Keishi Otomo of NHK,” and that would suffice. But “NHK” means nothing to the average American. He had trouble finding a way to describe himself. He wasn’t a regular student because he was sponsored by his employer, and he wasn’t directing a film at the time. People kept asking why he was in America and what he wanted to do there, but he was only able to give vague answers.

After a bit of soul searching, Otomo realized he wasn’t just interested in the technology of filmmaking but also in filmmaking from a broad perspective, including the American-style thinking and educational principles behind the environment that made Hollywood’s movie business a success and formed the foundation of the entertainment business. Such elements have had an impact not just on the filmmaking environment but also on the style and content of the films themselves, he thought. To expose himself to filmmaking processes other than the direction and production aspects, he started attending night classes at the University of California in Los Angeles, which attracted marketing professionals, composers, and other specialists wanting to study all aspects of filmmaking. He befriended all sorts of people, and, as a result, people invited him to visit their workplaces where he was exposed to actual filmmaking. When he started to open up about what he wanted to do, he was surprised how accepting people were.

The people he met in America weren’t concerned about what organization he belonged to. He learned that it was much more important to communicate what he was interested in and what he wanted to do. As long as you’re able to do that, he says, Americans will be more than willing to accept you.

Through these experiences in the United States, Otomo became more assertive and developed the ability to do whatever it takes to communicate his ideas. He says these skills come in handy when he is directing a film because the work involves interacting with a wide range of people.

Before he studied abroad, Otomo was in turmoil about leaving Japan and his TV drama work, he says. He was worried that his colleagues would forget about him if he left his home base for two whole years. Would he still be able to get work as a film director?

“Think about the protagonist of a TV drama,” he says. “A protagonist who always succeeds is boring. There are things you can learn from losing something important. Stories become deeper when the protagonist fails repeatedly but succeeds in the end. Characters who have struggled and experienced misfortune are more relatable and interesting. This is true for fiction, but of course the same can be said of a real person’s life, I think.”

Spoken like a true film director! What Otomo says is particularly persuasive because he has taken the plunge himself. When asked what he would say to someone wondering whether to study abroad, he said, “You’d be better off going than not going.”

To students who are thinking about studying abroad and uncertain about whether to take the plunge, Otomo offered the following advice: “I was involved in creating a drama about Sakamoto Ryoma. Think about him. He left the Tosa Domain, even though that was considered to be a serious crime in that day. I think he did it simply because he was curious. He wanted to experience the outside world, see interesting things, meet all kinds of people, and talk about all kinds of things. I didn’t always want to be a film director. I just did my best with each opportunity that came my way. When I got the opportunity to study abroad, I jumped at the chance. I wouldn’t be who I am today if hadn’t done it. I think there are very few people who have a clear vision for their life from an early age. It’s okay to go where your curiosity leads you. I think a path will naturally open up if you follow your curiosity.” 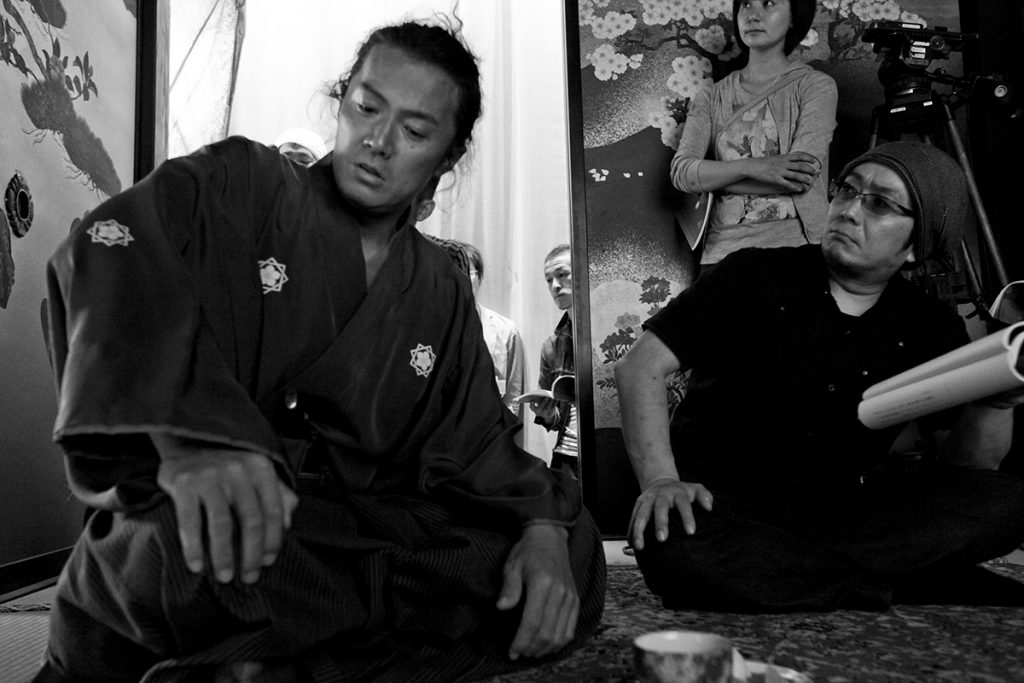 Film director Keishi Otomo works with an actor on the set of "Ryomaden." 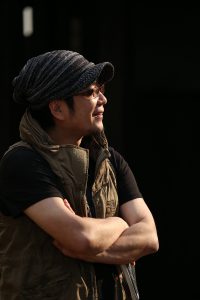 Born in 1966 in Iwate Prefecture. After graduating from Keio University, he joined Japan Broadcasting Corporation (NHK) in 1990. While working in the Drama Production Division, Otomo had an opportunity to learn about scriptwriting and direction in Los Angeles for two years. After returning to Japan, he directed the TV dramas, “The Vulture” (2007), “Mr. Jiro Shirasu” (09), and “Ryomaden” (2010), which were highly acclaimed, winning various awards domestically and internationally. He left NHK in April 2011 and established his own company. His major films include the following: “The Vulture” (2009), “Rurouni Kenshin” (2012), “Platinum Data” (2013), “Rurouni Kenshin: Kyoto Inferno” (2014), “Rurouni Kenshin: The Legend Ends” (2014), “The Top Secret: Murder in Mind” (2016), “MUSEUM” (2016), and “March comes in like a lion” (2017). Last year, he started a new joint venture company called OFFICE Oplus with Dentsu Inc. and continues to work actively with an eye to future productions in Japan and overseas.