Irankarapte! —That means “hello” in the Ainu language.

The construction of the Upopoy, a symbolic space for peoples to coexist that comprises the National Ainu Museum, park, and memorial, was completed this year in Shiraoi, Hokkaido, and the facility is now open to the public. The complex is expected to serve not only as a place to promote and disseminate Ainu culture, but also to encourage its revitalization and development.

The U.S. Consulate General Sapporo conducted an online interview with Rie Kayano, a young upholder of Ainu culture. Kayano lives in Biratori, Hokkaido, which is a 90-minute drive from Sapporo and a one-hour drive from New Chitose Airport, Hokkaido’s gateway to the skies. Biratori is a small town with a population of about 5,300 people. Over half the population of Biratori is of Ainu heritage. Biratori has many facilities where people can learn about Ainu culture, such as the Nibutani Ainu Culture Museum, Historical Museum of the Saru River, and the Kayano Shigeru Nibutani Ainu Museum.

Kayano was one of the first students to receive a university scholarship for Ainu people from the Urespa Project. After she entered university, Kayano began to learn about Ainu culture, exploring her identity and roots. One day, her university mentor told her about an opportunity for further exploration and discovery through meeting Native American peoples. Kayano took an interest in the situation of Native Americans in the United States. She visited Florida last year to meet with the Seminole Tribe.

U.S. Consulate General Sapporo (USCGS): Following your encounter with the Seminoles, have you noticed any change in how you see yourself within the Ainu culture? Has your perception of how others view the Ainu culture changed? 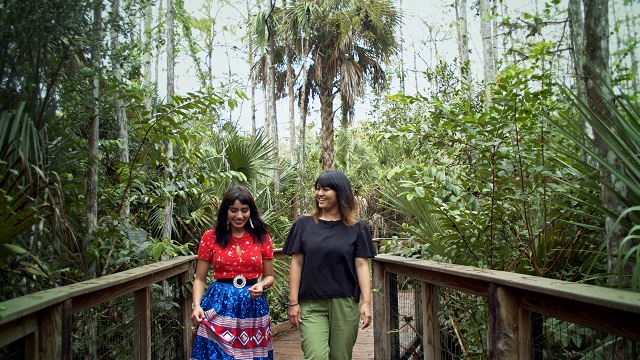 Meeting with the Seminole Tribe gave Kayano an opportunity to think about the future of the Ainu. (©︎3Minute inc.)

USCGS: In addition to introducing Ainu culture to people through songs, are you using any new techniques to share the culture? For instance, are you using YouTube or other social media platforms to convey information or combining songs and other media?

Kayano: My own work is centered around traditional media rather than new techniques. I’m an assistant instructor for classes on oral literature as well as Ainu dance. Recently I collaborated with tech-savvy people to stream Ainu oral literature on YouTube with recordings I provided. Some young people are using YouTube to actively convey information on Ainu culture regardless of whether they’re Ainu. I’d prefer to focus on areas I’m skilled at, such as songs and oral literature.

USCGS: What are some of the difficulties or issues you’ve faced in conveying Ainu culture?

Kayano: Ainu culture was traditionally an oral culture. Previous generations have passed down the culture through language. Now, Ainu people of all generations are educated in Japanese and learn the Ainu language not through people but through cassette tapes and other recorded media. Some Ainu people in their 70s who grew up listening to spoken Ainu later studied the language and became capable of speaking Ainu. Resources are limited, however, and nobody can carry on daily conversations as native speakers now. The environment for learning the Ainu language is quite limited. We can’t travel abroad to practice conversation like we can with other languages. My child sometimes listens to me practicing Ainu oral arts at home, but our conversations are in Japanese. I only started to learn Ainu after I entered university. Because the Ainu language is no longer used in daily life, it’s very difficult to pass the language down to future generations. It might be easier to pass down traditional dance and traditional performing arts, such as mukkuri (a traditional instrument), than language. 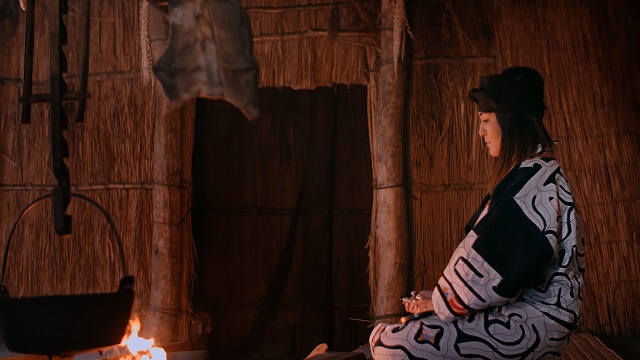 USCGS: The year 2020 is an important year for the Ainu people on account of the launch of the Upopoy, a focal point for revitalization and creativity of Ainu culture, in Shiraoi, Hokkaido. What perspective do you want to take in communicating information about Ainu people and culture?

Kayano: I’ve heard that the opening of the Upopoy was even advertised using posters on public transportation in Tokyo. I think this level of publicity is unprecedented. I hope the Upopoy will create opportunities for the Ainu people to be recognized across Japan. The Ainu live not only in Shiraoi, but also in Nibutani, Akan, and Asahikawa, so I hope the Upopoy will generate interest in these areas as well. I think it’s important that people not only go to the Upopoy, but also take an interest in the Ainu as people leading their daily lives. The Ainu in museums do not represent the entirety of the Ainu people. We wear the same clothes, eat the same foods, work, and lead the same kind of daily lives as all Japanese do. We might even be living close to you.