On October 24, 2015, Ambassador Caroline Kennedy visited Takehara in Hiroshima Prefecture to attend a ceremony commemorating the 50th anniversary of the passing of Hayato Ikeda, Japan’s Prime Minister during the John F. Kennedy administration. After the event, she made a brief stop in the nearby community of Saijo. Here, she visited a small church and attached kindergarten to meet the students and see the bell that was given to the church by President Kennedy.

How did a small church in Hiroshima Prefecture end up receiving a bell from the President of the United States?

In 1960, a fourteen-year-old boy named Ricky Lundin was attending Sunday School at Pilgrim Lutheran Church in Rhode Island, when his pastor, Carl W. Bloomquist, told the class a story about his seminary roommate, Pastor George Olsen, who was serving as a missionary in Japan. Pastor Olsen shared with Pastor Bloomquist that his church in Hiroshima desperately needed a bell and Pastor Bloomquist asked his students to pray that somewhere, an unused bell could be found for the church in Hiroshima.

Perhaps Pastor Bloomquist had imagined that another church somewhere might have an old bell they could donate, or that the students would be able to raise money to buy one, but Ricky had another idea. Due to his keen interest in ships and the Navy, Ricky knew that many ships from World War II were being decommissioned around that time. Since all ships are outfitted with bells, Ricky thought, why not salvage the bell off of a ship before it was scrapped? So, with all the audacity of a fourteen-year-old boy, he decided to write a letter to newly-elected President John F. Kennedy to make his request. The letter that Ricky Lundin sent to President John F. Kennedy to request a bell for Saijo Lutheran Church in Hiroshima

Remarkably, the President’s Special Assistant, Ralph Duggan, told President Kennedy about the project, and the President directed Mr. Duggan to work with appropriate officials to find Ricky a bell. The letter that the President’s Special Assistant, Ralph Duggan, sent to Ricky Lundin in response to his inquiry

Eventually, a curator from the Department of the Navy’s historical division located a bell on the recently decommissioned USS Gila River, a small warship designed to support amphibious landings. This ship had been built toward the end of World War II and never saw action before the end of the war. The Navy offered to send the bell, which weighed between 75-100 pounds, to Ricky’s church but the church would be responsible for the shipping costs.

Pastor Bloomquist contacted Japan Airlines, which agreed to ship the bell to Japan for free. After a long journey across the Pacific Ocean, the bell was ceremoniously presented to Saijo Lutheran Church, its new home in Higashi-Hiroshima, in 1962.

Many of the details of this story were forgotten in the decades after the bell’s arrival in Hiroshima. But when Caroline Kennedy was named U.S. Ambassador to Japan, Akihiro Kanegae, the church’s Pastor and kindergarten director at the time, told his students about the bell’s relationship to the new Ambassador. Similar to Ricky Lundin over 50 years prior, the children of Saijo Lutheran Kindergarten took the initiative and wrote to the U.S. Embassy, inviting Ambassador Kennedy to come and see the “Kennedy Bell.”

U.S. Consul General in Osaka Allen Greenberg, upon hearing about the invitation, decided to visit Saijo Lutheran Church to learn more about the bell. Pastor Kanegae was able to share part of the history of the bell, and a successor to Pastor Bloomquist at Pilgrim Lutheran Church was able to contact the family of Ricky Lundin to piece together the American side of the story. Staff at the John F. Kennedy Presidential Library and Museum in Boston searched the archives to find copies of the original correspondence between Ricky Lundin and President Kennedy’s staff, thereby documenting the direct connection between the bell and former President Kennedy.

When Ambassador Kennedy visited Saijo, she was greeted by the assembled students of the kindergarten, who fittingly sang the song “It’s a Small World” for her. 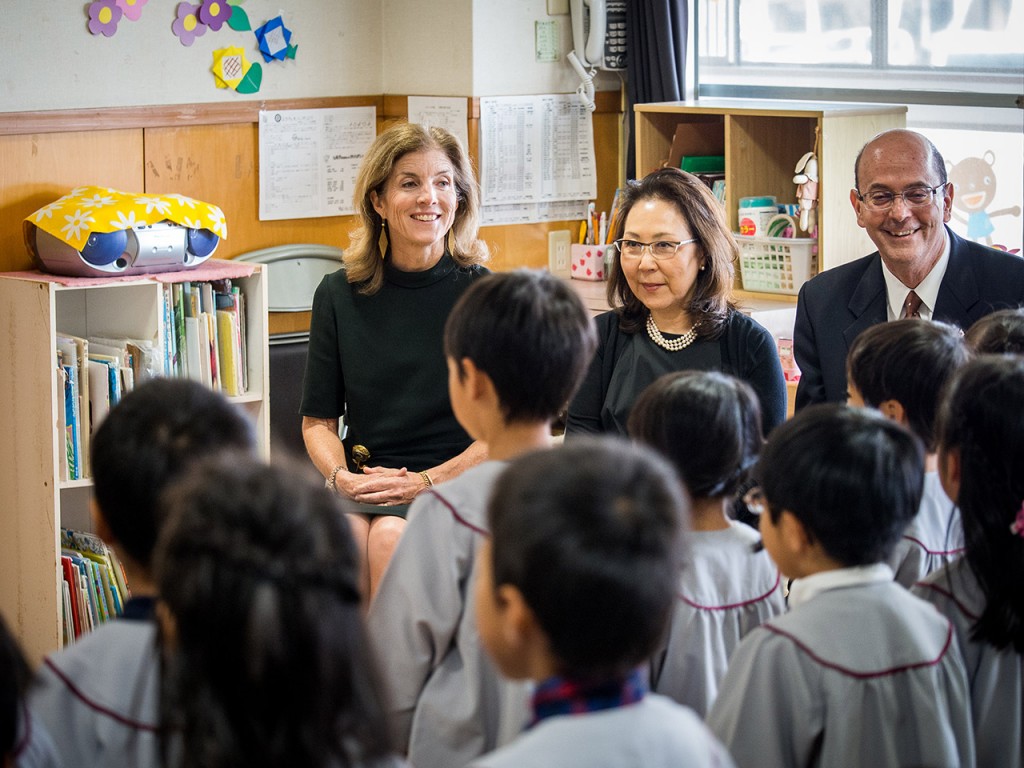 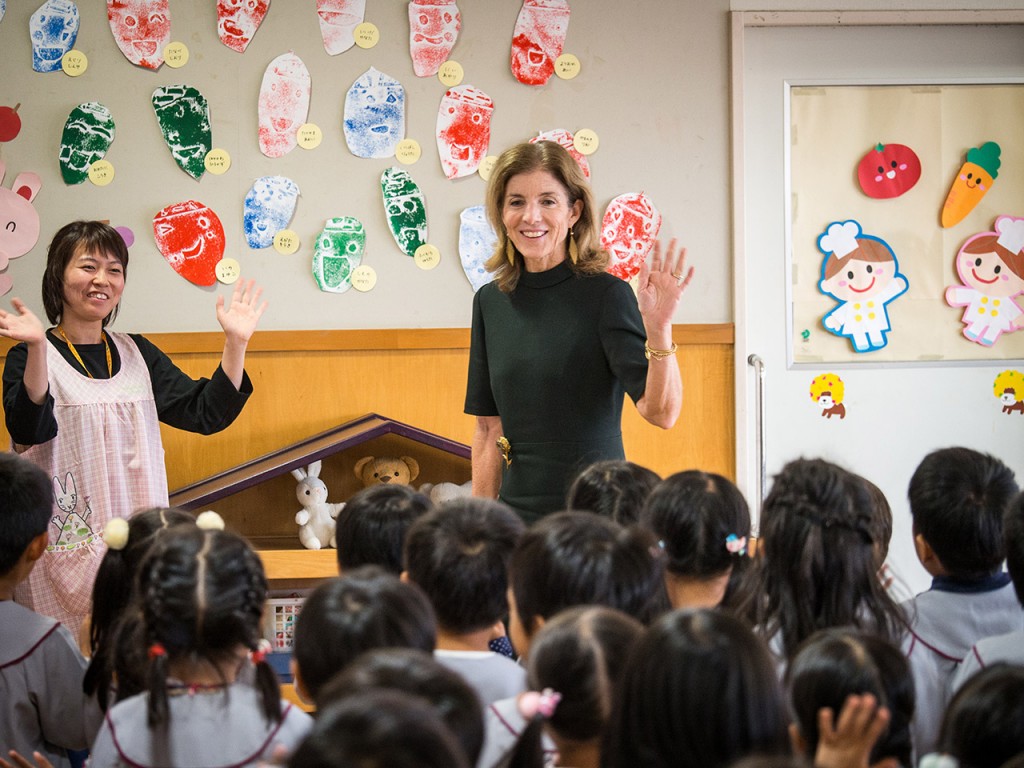 Ambassador Kennedy in turn thanked the students for taking such good care of this symbol of U.S.-Japan friendship for so many decades, and presented the kindergarten framed copies of the archive letters, encouraging them to always remember that the effort of one young person can make a lasting difference in the world.