By Lane Mikula and Noelani Kirschner

Local governments in many cities are tackling long-standing air quality issues, and many of them see positive results. Here’s how four large urban areas — Chicago, Los Angeles, Pittsburgh and New York — have made strides in helping their residents breathe easier.

Chicago (shown above in photos taken decades apart) was the first major U.S. city to develop a comprehensive climate plan in 2008, and since then has continued to improve its air quality targets. Local tech initiatives such as the 2016 Array of Things (AoT) project help the city improve its air quality. The AoT project uses sensors on light posts throughout the city to collect environmental data on a scale not seen before in the city. Chicago also created the Pollution Prevention Unit to reduce emissions and is working toward a zero-emissions transportation system by expanding bike lanes and investing in electric vehicles for city purposes.

Los Angeles is committed to setting and meeting climate goals to improve its air quality. New technology, such as solar panels and hybrid and electric cars, have made construction and energy practices more environmentally friendly in the city.

The city is also launching a pilot project whereby all delivery trucks — which use diesel fuel — will create zero emissions by 2035. Los Angeles public libraries are launching a program for residents to check out air sensors, the way they might check out books, for use inside or outside their homes to monitor pollution levels, which will be helpful during wildfire season. 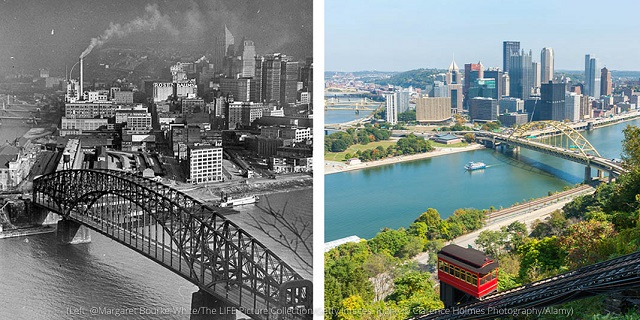 Once famous for its steel mills, Pittsburgh is now a model city for how government initiatives and new technology can create a cleaner environment. People who visit Pittsburgh today can see the Tower at PNC Plaza, a 33-­story office building that surpassed the highest certification requirements in sustainable design from the U.S. Green Building Council. They mayor’s office is also investing in fossil fuel-free public transit, renewable energy in all city facilities, and working to cut all transportation emissions in half by 2030. 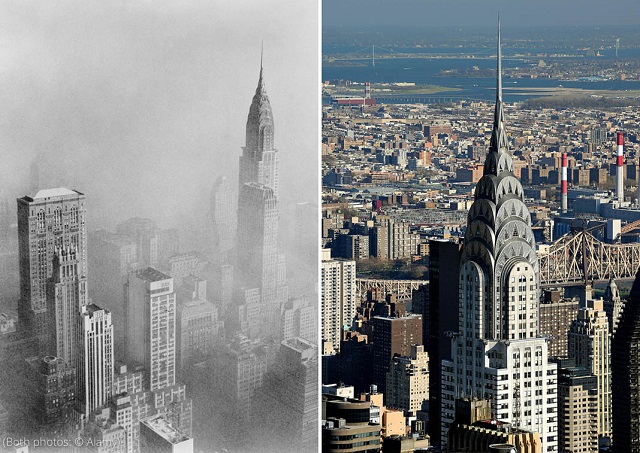 Smog hangs over New York’s Chrysler Building in 1953 (left). Fine-particulate pollution dropped 40% over the past 20 years, bringing the cleaner air photographed in 2011 (right). (Both photos: © Alamy)

New York, one of the most densely populated cities in the world, has thousands of buildings and constant traffic. But thanks to air quality measures implemented by local and state governments, New York’s fine particulate matter pollution has decreased by 40% in two decades. New York is on track to meet its 2025 climate goals, too, through infrastructure projects that will supply 100% clean energy to the city by 2040.

A version of this story was previously published April 15, 2019.