On April 7, 2013, a small boat encrusted with gooseneck barnacles, seashells, and seaweed washed ashore in Crescent City, California. Japanese characters on the boat revealed it belonged to Takata High School, a school in Rikuzentakata, Japan, a town that was nearly destroyed by the tsunami that struck the eastern part of Japan on March 11, 2011. Who could have foreseen that this little boat’s two-year, 10,000-mile sea journey would be the catalyst for a deep friendship between people on opposite sides of the ocean? 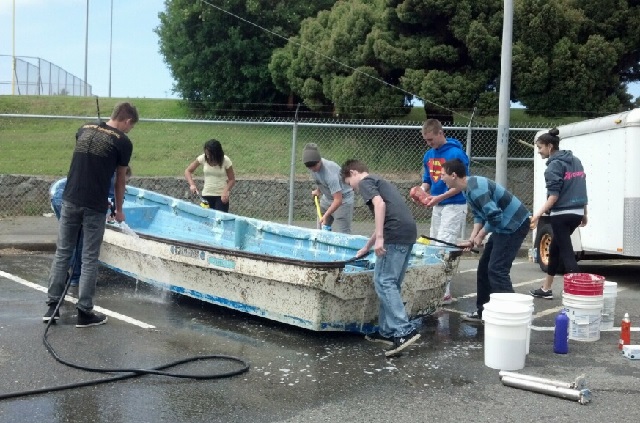 Students at Del Norte High School give Kamome a thorough cleaning before its return journey to Rikuzentakata. (Photo courtesy of Blake Inscore)

Students at Del Norte High School in Crescent City spent a summer restoring the boat and discovered that it had a name—Kamome, which means seagull in Japanese. The students were determined to return the boat to its rightful owners, and in September 2013, they made sure Kamome found its way back to Takata High School. Kamome’s story does not end with its return voyage home, however. Rather, it was the beginning of two vibrant friendships, a sister-school relationship between Takata High School and Del Norte High School and a sister-city relationship between Rikuzentakata and Crescent City.

The sister relationships thrive and deepen

The students and citizens of the two cities are not friends in name only. Following the return of Kamome, students at Takata High School invited the Del Norte students to visit Rikuzentakata as a way of thanking them for delivering their boat. Thus began regular student exchanges between the sister schools during which students shared different aspects of their culture, from food to language to sports and more. 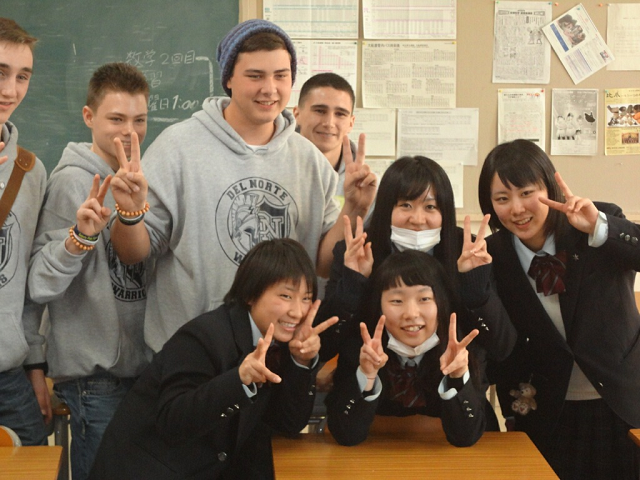 But the connection between the two towns wasn’t limited to young people. In the fall of 2016, officials in Rikuzentakata approached Crescent City counterparts about establishing a sister-city relationship. Crescent City Mayor Blake Inscore visited Rikuzentakata to begin the process of formalizing the sister-city agreement. He told the citizens of Rikuzentakata about his experience serving in the U.S. Navy while posted in Yokosuka, Japan, and recalled a time when several Japanese helped him in a time of need, even though he had never met them before.

“I want to say thank you for making an impact on my life. I am who I am today because you as a people invested in me, and I hope that someday our community can invest in your community and we can show that kind of kindness to you.” From that moment, both sides were inspired to work together and explore possible areas of collaboration and exchange.

In formalizing the relationship, Inscore told his Rikuzentakata counterpart, Mayor Futoshi Toba, “I know we come from different spiritual backgrounds, but I don’t think this is a coincidence. I believe there is some form of divine providence that has connected these two communities. I feel like this was meant to be.” 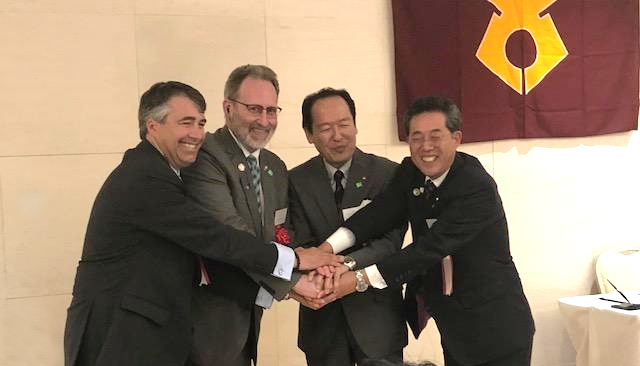 Even as the student exchanges continued, citizens in both towns participated in exchanges focusing on areas such as emergency preparedness and education. One of the highlights was a workshop that Crescent City organized for a delegation from Rikuzentakata in December 2019 to support Mayor Toba’s vision for rebuilding his city, which included women’s empowerment, early English education for students, and purposeful inclusion of special needs children in education. Crescent City arranged for experts in these areas to consult with the Rikuzentakata delegation and assure them of continued support following the workshop. While enjoying their time in California, the delegation was impressed by the Christmas decorations they saw. Although COVID-19 made subsequent in-person visits impossible, the people of Rikuzentakata sent Christmas wreaths with origami Santas to their American friends for the holiday. Inscore distributed the wreaths at a senior center in Crescent City, further expanding the circle of friendship.

The two cities are also collaborating on products that celebrate the friendship and create economic ties. SeaQuake Brewing in Crescent City has developed a special beer dedicated to the sister-city relationship that is aptly named Kamome Ale. The brewmaster consulted with a delegation from Rikuzentakata to ensure that the light blonde ale would appeal to Japanese tastes. The Japanese even provided input on the label design, which features Crescent City’s redwoods and Rikuzentakata’s lone surviving “miracle” pine tree (the only one that survived when all of the approximately 70,000 trees in a forest in Rikuzentakata were wiped out by the tsunami). 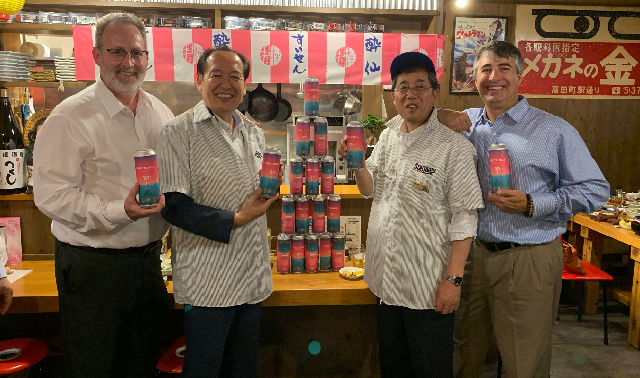 Rumiano Cheese, another Crescent City-based company, has incorporated Japanese salt from Rikuzentakata into its own award-winning dry jack cheese named Kamome, and is using the profits to enable more students in Rikuzentakata to travel to the United States.

A documentary immortalizes the friendship between the two cities

The story of Kamome and the deep friendships it engendered is so compelling that NBC Sports made a documentary about it. Kamome, now streaming on NBC’s Peacocktv.com, traces the development of the special relationship between Rikuzentakata and Crescent City that began after the return of the boat. “Rikuzentakata and Crescent City are half a world apart, but connected by tragedy, chance, and a 10,000-mile journey across open waters,” the documentary’s narration begins. “The unlikely friendships that blossom between parallel towns are a reminder of humanity’s best instincts.” In the documentary, Inscore is shown planting a redwood tree from Crescent City in Rikuzentakata alongside Mayor Toba. Inscore recalls that he turned to Toba and said “Who would’ve ever dreamed that you and I would be walking up this hill with a redwood tree?” to which Toba replied, “Well, obviously it was supposed to be.”

Inscore describes the moment of planting the tree as “very, very real.  We were covered in mud and shook hands, and for that moment, everything else was gone. It was just two guys from very different worlds who were proud that somehow our communities had been brought together.”

“Out of tragedy comes hope”

Inscore believes the Rikuzentakata-Crescent City friendship has given his community a sense that they are part of a bigger world. “Because our small, remote community had connectivity with another small, remote community, it shows that you can be connected outside of your own borders.” He also envisions the friendship continuing and expanding for years to come, especially when it comes to the students.  “Kids will continue to go and will be able to look back at all the other students who have gone and think ‘wow, I’m part of a story.’  Nobody will remember me and what I did, but kids will have the opportunity to see the world from a different perspective and be part of this story long after I am gone.”

The Rikuzentakata-Crescent City story is a powerful reminder that compassion and connection between people from different countries and cultures can come from unexpected circumstances, even disaster. “Anything we’ve learned that we need to apply to 2020 is that out of tragedy comes hope,” says Inscore.  “It doesn’t come without a cost or without work. Hope requires effort to embrace it, and I’m grateful Rikuzentakata and our community have shown that.”

And it all began with a boat.

Banner image: A delegation from Crescent City participates in the ceremonial planting of a redwood tree with Rikuzentakata officials. (Photo courtesy of Blake Inscore)