“One of my goals in working for the human rights of LGBTQI+ persons is to shorten the time that people have to wait for their human rights to be respected and protected,” Stern said. “People say, ‘Fifty years ago it was worse than it is today, but that’s not good enough. If you live with discrimination and violence, you need protection now so we have to accelerate progress for LGBTQI+ persons everywhere.”

In her role as special envoy, she works with governments, civil society organizations and the private sector to promote equal respect for the human rights of the LGBTQI+ community worldwide.

“Very few governments in the world have made a commitment to the integration of LGBTQI+ human rights in their foreign policy,” Stern said. “The U.S. can have an outsized impact by respecting the universality of human rights. The U.S. can be a source of hope and inspiration for others.”

Stern said in an interview that her priorities as envoy will include:

Before joining the State Department, Stern spent her career as an advocate for gender, sexuality and human rights globally. Most recently she was executive director for OutRight Action International, a human rights organization headquartered in New York City. While there, she worked with other organizations to ensure that the U.N. had an independent expert on sexual orientation and gender identity, considered a historic victory for the LGBTQI+ community. 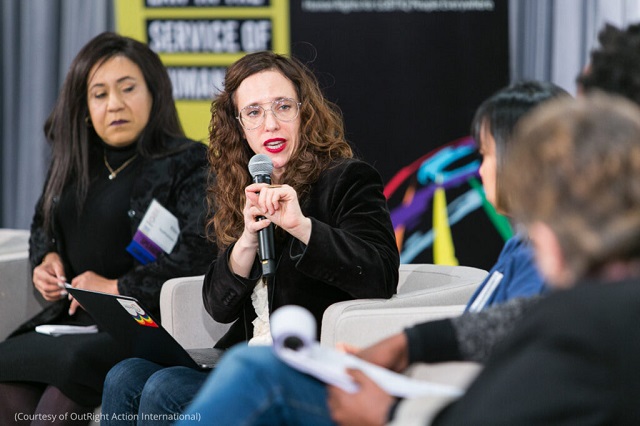 Stern, who has lived in Mexico, the United Kingdom and Uruguay, said she has seen progress in some regions where LGBTQI+ persons are treated with dignity and protected. However, in other nations the community’s rights are under attack, and members are less safe compared with five years ago.

Community members do not seek special human rights, she said, only the same rights as everyone else. They want to walk to school safely without harassment, obtain employment without discrimination and talk to doctors about their health without stigma.

LGBTQI+ individuals should not face arbitrary arrest or threats of prosecution for engaging in same-sex sexual activity or openly expressing their gender identity. “We have to focus on LGBTQI+ humanity and support organizations that are advocating for their rights,” Stern said.

Stern said a true test of the rule of law is how well a nation protects its most vulnerable populations, not just its most privileged.

President Biden issued the Memorandum on Advancing the Human Rights of Lesbian, Gay, Bisexual, Transgender, Queer, and Intersex Persons Around the World in February. The document outlines U.S. foreign policy on the human rights of LGBTQI+ persons.

“All human beings should be treated with respect and dignity and should be able to live without fear no matter who they are or whom they love,” the memo states.

Stern is the second appointee to serve in the role. Ambassador Randy Berry held the position from 2015 to 2017.

“There are those who think that recognition of LGBTQI+ people will erode the fabric of society or the stability of nations,” she said. “What makes nations strong is diversity and equal human rights for all without exclusion.”