Meet the Woman Who Represents the United States in Trade

Katherine C. Tai, the new U.S. trade representative, brings a wealth of experience to the role, including as chief counsel for China trade enforcement.

Tai is the 19th person sworn in as U.S. trade representative since an act of Congress created the position in 1962. Before then, the U.S. Department of State conducted U.S. trade and investment diplomacy. The Office of the U.S. Trade Representative was created 13 years later. Today, the agency employs 200 professionals with specialized experience in trade issues in all regions of the world. Tai’s role involves serving as the president’s principal trade adviser, negotiator and spokesperson on trade issues.

In her first remarks to staff, Tai said her team has a clear mandate from President Biden. From implementing and enforcing the new U.S.-Mexico-Canada trade agreement and rebuilding alliances, to considering the trade ramifications of the COVID-19 pandemic, racial and gender inequity, or climate change, her team has a lot of work to do.

“We will have to walk, chew gum and play chess at the same time,” Tai said. “I know the expertise, the talent, and the commitment that all of you bring to everything that you do. I have faith that we will collectively rise to this challenge.” 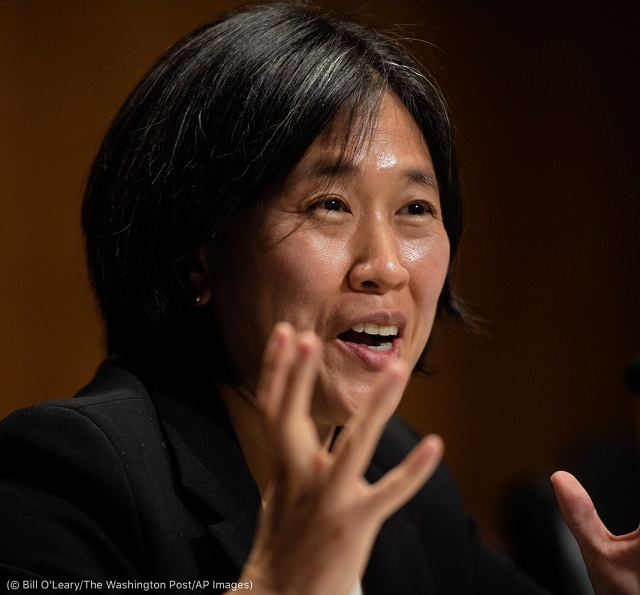 Before joining Biden’s cabinet, Tai served as chief trade counsel of the House Ways and Means Committee, where she advised the committee chairman and Democratic members on international trade issues. For example, she helped the committee improve the U.S.-Mexico-Canada trade agreement and secure the support needed for its passage.

Earlier, from 2007 to 2014, she worked in the Office of the General Counsel at the U.S. Trade Representative’s Office. There, she moved from a role as associate general counsel to chief counsel for China trade enforcement. In many instances, she appeared before the World Trade Organization to successfully argue the U.S. case against China’s trade practices.

Born in Connecticut to parents from mainland China, Tai was raised in Washington. She graduated from Yale University and earned a law degree from Harvard Law School.

Vice President Harris administered the oath of office to Tai on March 18, the day after the U.S. Senate unanimously confirmed Tai’s nomination by a vote of 98-0. She is the first Asian American to take on the role of representing the U.S. in international trade negotiations, a role in which she promised staff “unprecedented engagement.”