Americans, like people from other countries, revere their nation’s history.

They study the men and women who helped found their country, performed acts of heroism in its service and led it in good times and bad. They visit national monuments and parks. They read books about the United States to learn new stories.

In recent years, growing numbers of Americans have come to understand that their history is richer and more complex, if less uniformly triumphant, than they once thought. New scholars pay greater attention to the contributions and stories of previously marginalized Americans and to events that redound to the nation’s shame rather than its pride. U.S. monuments, museum exhibitions, literature and even messaging apps are all beginning to reflect this.

Take Thomas Jefferson. For hundreds of years, American schoolchildren met him as a Founding Father, author of the Declaration of Independence, and the third president of the United States. But Jefferson also enslaved 600 Black people during his lifetime and fathered at least six children with one of them, Sally Hemings. Monticello, Jefferson’s stately Virginia home, was once a working plantation grounded in slave labor.

In 2000, the Thomas Jefferson Foundation published a report detailing Jefferson’s paternity of Hemings’ children. Today, that aspect of his life is part of every Monticello tour. It appears in exhibits and in visitors’ print material. The original story is still there, but the new, more complete one helps visitors understand that slavery was part of how the United States developed — economically, socially and culturally.

Monuments and memorials show Americans who and what has been worthy of veneration or continues to influence them, how they view themselves as a nation, and how they see and understand their past and future, said Elizabeth Alexander, an accomplished poet and essayist and the president of the Andrew W. Mellon Foundation.

The foundation recently launched its $250 million Monuments Project to present a fuller picture of American history and to update existing monuments to include people who have been denied historical recognition.

One funded project helps artists and technologists at the Los Angeles County Museum of Art to create virtual monuments and murals on the messaging app Snapchat. These bring L.A.’s diversity to anyone with a smartphone. 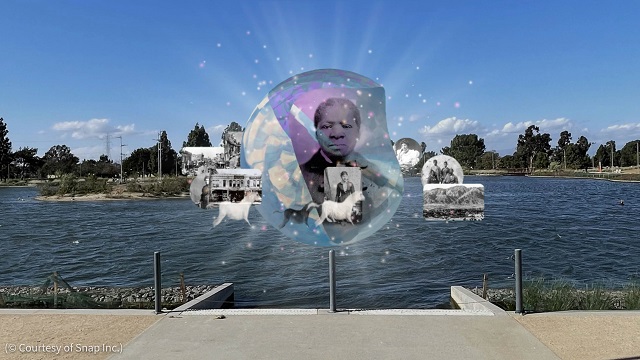 “The Open Hand is Blessed” by artist Ada Pinkston, honors Biddy Mason, an enslaved woman who successfully sued for her freedom and became a philanthropist. The work was produced as part of the Los Angeles County Museum of Art and Snapchat’s Monumental Perspectives project, supported by the Mellon Foundation. (© Courtesy of Snap Inc.)

Some monuments help Americans understand that their national history includes injustices. Alexander points to the Manzanar Cemetery Monument in California, which memorializes people who died in one of several camps the U.S. government built to detain Japanese Americans during World War II, after the Japanese attacked Pearl Harbor. The Japanese kanji characters on the obelisk say “Soul Consoling Tower.” 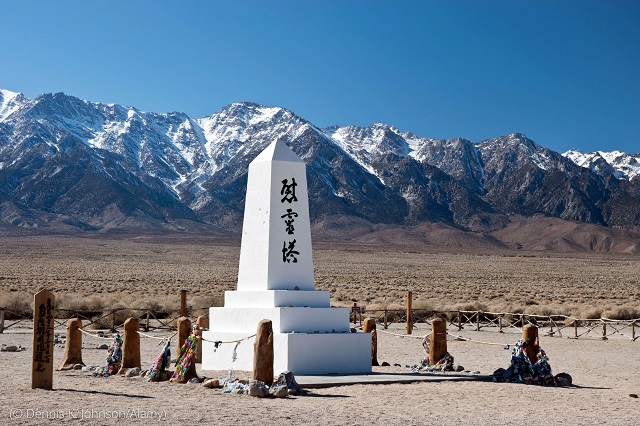 The U.S. government detained 120,000 Japanese Americans during World War II. The Manzanar Cemetery Monument honors 150 of them who died at the Manzanar camp, some of whom are buried nearby. One of its inscriptions says it was erected by the Manzanar Japanese. (© Dennis K. Johnson/Alamy)

Alexander also points to the César Chávez Monument at San José State University in California. Built in 2008, it has panels that feature the unheralded farm laborers whom Chávez championed in the 1960s and 1970s, rather than Chávez himself. Alexander argues that many more stories of underappreciated U.S. communities are waiting to be told. 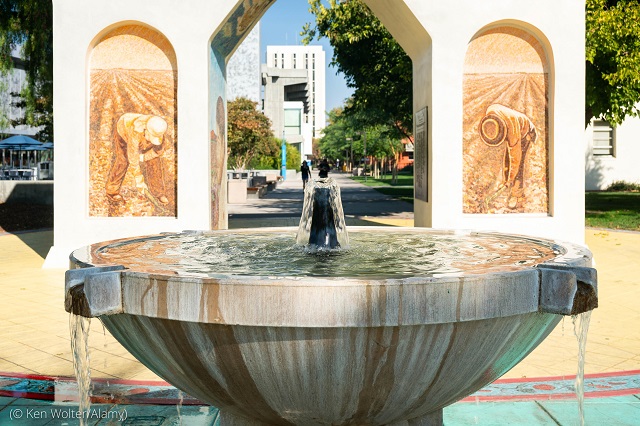 The César Chávez Monument on the campus of San José State University stands behind the Silva Family Fountain. (© Ken Wolter/Alamy)

Social movements can spark national change in a country’s relationship to history. Fuentes cites the civil rights movement, which pushed government officials to rename schools and name and rename schools and streets and to create a national holiday honoring Martin Luther King Jr.

“This was in the wake of public pressure to memorialize the labor that he as an individual extended on behalf of African Americans, and really, the country coming to terms with what a peaceful change means,” Fuentes said.

Even as Americans find new people and events to memorialize, others seem less worthy. The Southern Poverty Law Center, a group that tracks American hate groups, reports that 160 symbols honoring the Confederacy of Southern states that seceded from the Union in 1861, leading to the Civil War, were removed in 2020. Of them, 94 were monuments. These removals accelerated after the May 2020 murder of George Floyd, an African American, by a white police officer and the protests that followed. 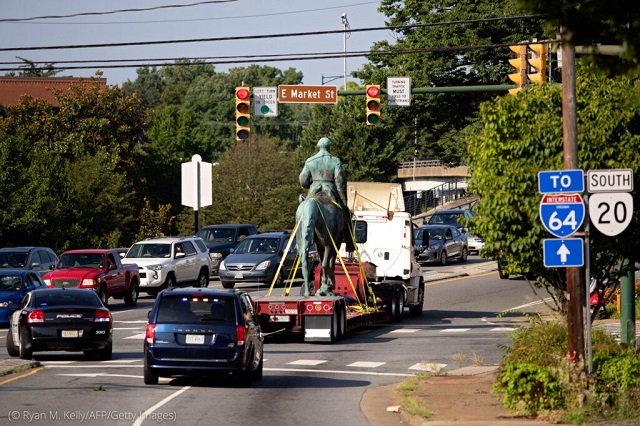 A statue of Confederate General Robert E. Lee is driven away from a park in Charlottesville, Virginia, in July, nearly four years after the threat of its removal attracted a white supremacist mob that turned violent, leaving one woman dead. (© Ryan M. Kelly/AFP/Getty Images)

As the Democratic Party’s nominee for U.S. president in 2020, Joe Biden announced that instead of Columbus Day, he would celebrate Indigenous Peoples Day to honor Native Americans’ contributions to the country, which include those of the Navajo Code Talkers, who helped defeat fascism during World War II. Biden said the U.S. has never lived up to its full promise of equality for all — especially for indigenous people, who have endured centuries of mistreatment and broken promises. “It is a sad part of our history that every American must learn and respect,” he said.

New understanding of the nation’s history leads to changes throughout American culture. Some sports teams are changing their names after having been criticized for insensitive representations of Native Americans. The Cleveland Indians baseball team becomes the Cleveland Guardians in December, and the Washington National Football League franchise recently dropped a name disparaging to Native Americans and is today simply called the Washington Football Team. Many university and secondary school teams are ditching names for similar reasons.

“History is not set in stone,” said Gary Younge, a professor at the University of Manchester, told NPR. “Our views are not the same as they were 50 years ago, and will be different again in another 50 years.”