Audrey and Thibault Decker are passionate about art. They also care deeply about child trafficking, global hunger and other human rights issues. Their goal was to combine the two.

“Art is a universal language that speaks to every generation in every instance, so we wanted to use it in a positive way,” Thibault Decker told ShareAmerica.

In 2015, they found a way. The Deckers created Street Art for Mankind, a nonprofit organization in New York that has helped 80 international artists create human rights-themed murals and display them on busy pedestrian walkways in major cities. The goal is to capture attention and trigger action.

Carlos Alberto GH, a Mexican street artist (right), created a Zero Hunger mural in Detroit that features a female subject surrounded by fruit and vegetables. She holds the scales of justice in the form of food bowls. It is the largest 3D mural in the U.S. (@ streetartmankind)

“We are about social change and how to make society a better one on every subject possible,” Audrey Decker said.

Abstrk, a Cuban American artist, created “Not for Sale,” a mural in Miami about victims of human trafficking. (@ streetartmankind)

The murals often depict young children seeking hope or assistance. It’s difficult to pass them by. A mural in Miami shows a young boy behind a fence. The caption: “Not for sale.”

In 2021, the International Year for the Elimination of Child Labor, artists created 100 billboards of children at risk. They were displayed at bus stops and other visible spots throughout New York. Using a free app, viewers can scan a mural image and listen to the artist or experts discuss the issue.

“We imagine it as an open museum to bring out the diversity of art and democratize it to ensure people have access,” Thibault Decker said. “They don’t have to go to a museum to interact with the art.” 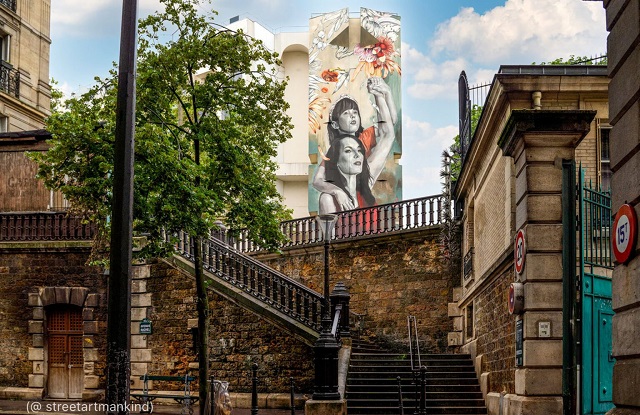 Lula Goce, a Spanish artist, created a mural to kick off the Generation Equality Forum in Paris. (@ streetartmankind)

Through the years, the Deckers have worked with the United Nations and other agencies and drawn themes from U.N. Sustainable Development Goals. This year they worked with U.N. Women on Generation Equality on murals in Mexico City, Paris and New York.

Public and private sponsors help to pay the artists and cover production costs. The Deckers plan to launch street art projects in the Middle East in 2022 in coordination with the U.N.

“This is where most people are working, so we want to stop them in their day-to-day routine,” Audrey Decker said of the locations. “The bigger the statement, the more comments the murals receive.”

Banner image: Emmanuel Jarus of Canada works on a mural near the United Nations headquarters in New York to honor its 75th anniversary in 2020 as part of a partnership with Street Art for Mankind. (© Mary Altaffer/AP Images)