A Smithsonian Institution exhibit titled Outbreak: Epidemics in a Connected World has been expanded in its scope and reach.

Since its launch in 2018, Outbreak has taught visitors to the National Museum of Natural History in Washington about Ebola, HIV/AIDS, smallpox and influenza. Now, with Outbreak recently updated to include information on the new coronavirus, the Outbreak team also is bringing the exhibit online so that people can access it easily from wherever they are.

Outbreak traces the roots of epidemics past and present while describing the roles of health workers and officials in combating the spread of pathogens. The materials explore zoonotic viruses like the COVID-19 virus, which migrate from animals to humans, and what can be done to prevent or contain the epidemics such viruses can cause.

In fact, most new infectious diseases are zoonotic, the exhibit explains. It shows how effective bats are at spreading pathogens to humans without getting very sick. (Bats fly long distances, taking viruses to new areas, and deforestation can bring them closer to where people live.)

One of the exhibition’s themes is the importance of ecosystems. Human health is tied to the health of animals and the natural environment, it says.

Getting the word out

The Smithsonian designed Outbreak to be easily replicated. In addition to the new digital exhibit, the museum launched an online do-it-yourself (DIY) distribution portal, which allows people to print and assemble the exhibition wherever they are. 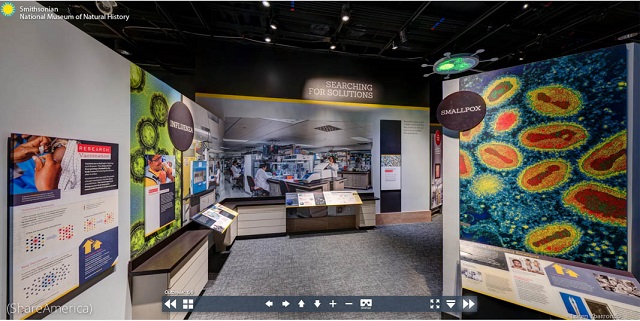 An image from the virtual tour of the Smithsonian’s “Outbreak” exhibition shows segments on vaccine research, influenza and smallpox. (ShareAmerica)

The materials are available in several languages (English, Arabic, French, Spanish, and Simplified and Traditional Chinese), and more translations are planned. In recent weeks, Outbreak DIY has reached Australia and Mexico, bringing the total number of countries replicating the exhibit to 41.

The exhibition’s message is especially relevant today, curator Sabrina Sholts said. “We have to work together — across borders, disciplines and communities — in order to prevent new diseases from emerging and becoming pandemic threats,” she said.

Banner image: Panels from an exhibit at the Museum of Natural History in Washington show how pathogens travel. (State Dept./D.A.Peterson)