The United States is helping international partners improve their waste management practices to keep plastics out of the world’s oceans.

The U.S. Federal Strategy for Addressing the Global Issues of Marine Litter, released October 19, outlines plans to bolster global efforts to reduce plastic pollution, which harms the environment and threatens economies that rely on oceans for food and tourism.

“Internationally, up to 28 billion pounds [12.7 million metric tons] of waste makes it into our oceans every year, harming marine life and coastal economies,” Environmental Protection Agency Administrator Andrew Wheeler said. “Marine litter is a top priority for this administration, and working together with our global partners, we aim to solve the current growing marine litter problem in our shared oceans.” 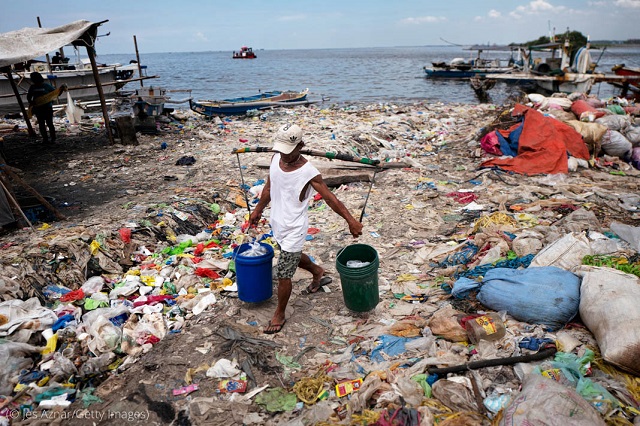 Each year an average of 7.3 million metric tons of plastic litter ends up in the world’s oceans, costing an estimated $264 billion annually. More than half of all marine litter comes from five countries in Asia, with China responsible for 7.4% of all plastic waste entering oceans, lakes and rivers in 2016, according to the strategy document.

The Save Our Seas Act that was enacted in 2018 directed the U.S. government to further limit marine litter at home and abroad. The renewed effort comes as global waste is expected to increase 70%, from 1.8 billion metric tons today to 3.08 billion metric tons generated annually by 2050, according to the strategy document.

The plan builds on a host of existing U.S. efforts to reduce marine litter, including those such as the EPA’s Trash Free Waters international initiative, which work with international partners to reduce sources of litter through increased awareness, waste collection or other efforts.

USAID launched the $14 million Municipal Waste Recycling Program in October 2016, which has provided grants to 30 locally led projects with innovative and sustainable solutions in Indonesia, the Philippines, Sri Lanka and Vietnam.

USAID is also partnering with the Alliance to End Plastic Waste and the private sector to deploy business models and technologies to improve waste management in cities that contribute to marine litter. The alliance has convened more than 50 private companies that have committed to collectively invest $1.5 billion in solutions to end plastic waste.

USAID, in collaboration with the U.S. International Development Finance Corporation, has also provided a $35 million partial loan guarantee to spur private sector investment in recycling in South and Southeast Asia.