Amagansett, Tappan Zee, Brooklyn and Little Haiti all are part of the fabric of the New York area, knit together from Native American references and the languages of waves of immigrants.

Names of New York: Discovering the City’s Past, Present, and Future Through Its Place-Names (Patheon Books, 2021), by Joshua Jelly-Schapiro, tells their stories.

Amagansett (good water) is one of many indigenous names sprinkled throughout the New York area, where peoples like the Montaukett and Lenape once lived. Jelly-Schapiro took a Lenape language class while he was writing the book, he told an online New York Public Library crowd in April.

“Names matter,” he starts the book. “Just ask any parent agonizing over what to call a newborn. Or any kid burdened with a name they hate. … And if names matter so much when attached to people, they matter even more when attached to places, as labels last longer, in our minds and on our maps, than any single human life.”

Tappan Zee, site of a bridge over the Hudson River, is an example of the layering of different cultures. Tappan comes from the name of a local Lenape tribe and Zee comes from Dutch for sea.

And though you would never know it from the expensive neighborhoods there now, Brooklyn came from the Dutch idea of a broken land because it was marshy, Jelly-Schapiro says. 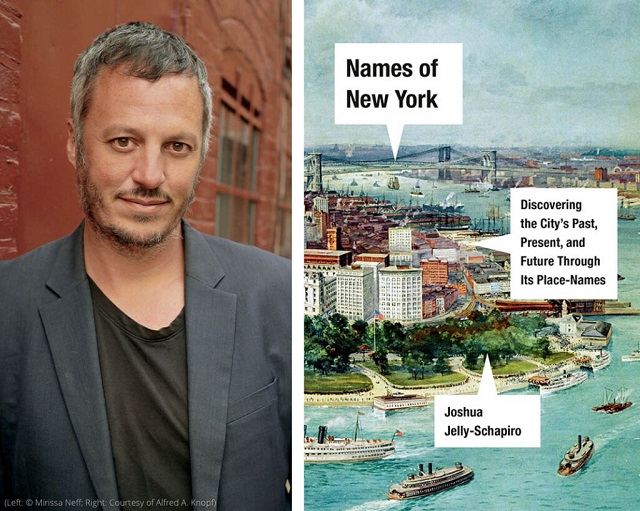 Joshua Jelly-Schapiro, left, and, at right, the cover of his book, showing an illustration of a much earlier lower Manhattan looking uptown (Left: © Mirissa Neff. Right: Courtesy of Alfred A. Knopf)

Some names stick because a foreign word just sounds interesting, like Hell Gate (which came from Dutch for beautiful strait but in English fits as a reference to its treacherous waters) or the many places named after “kills” — Dutch for creeks.

“I can’t be the only one who asked my parents, when we drove to visit my grandad in New Jersey via the Staten Island Expressway: ‘Why is New York’s biggest garbage dump called Fresh Kills?’” Jelly-Schapiro writes.

American names end up serving as place names all over the world. America’s first president, George Washington, has namesake cities and mountains in numerous countries, including Poland and the Dominican Republic. Although Washington might be the most topographically honored of all time, a fashionable New York area has spread its cachet worldwide. “In current times, Brooklyn’s got to take the cake,” Jelly-Schapiro told the audience at the New York Public Library’s April online book talk. (“Take the cake” is an informal expression in America that means to be the most remarkable of its kind. Learn other American idioms.)

How places get their names changes over time. Jelly-Schapiro said an air traffic controller of Yemeni descent couldn’t get the city to name his Bronx neighborhood after his compatriots living there. So he petitioned Google Maps and won a “Little Yemen” designation. It may not be official, but it’s on the Google map app that many travelers use.

“Place-making happens in all kinds of ways now,” Jelly-Schapiro says. “Such quests for recognition, by immigrants and others on the city’s margins who’ve used the power of names to make its streets home, are allied to other trends in a city whose dominant culture and norms keep shifting.”