Pacific nations, large and small, are rallying to support Ukraine. They have pledged hundreds of millions of dollars of humanitarian and military aid for Ukraine following Russian President Vladimir Putin’s unprovoked and unjustified war.

“War and conflict benefits no one and leads to widespread suffering,” Timor-Leste Vice Minister of Foreign Affairs and Cooperation Juliao da Silva said April 7, announcing $1.5 million in humanitarian relief for Ukraine. “We hope peace may soon prevail for Ukraine and its people.”

Timor-Leste is among the smaller Asian nations funding Red Cross and U.N. relief agencies’ humanitarian efforts in Ukraine. Countries including Singapore, Thailand and Mongolia have contributed to the hundreds of millions of dollars in humanitarian assistance Indo-Pacific countries are providing to Ukraine. These funds will aid Ukrainians remaining in the country as well as refugees fleeing Putin’s war.

On February 25, the Federated States of Micronesia (FSM) severed diplomatic relations with Russia in response to the invasion of Ukraine. “The FSM is taking this concrete step as a demonstration that we stand with Ukraine and categorically reject the most blatant act of aggression in Europe since World War 2,” FSM President David Panuelo said in a statement. “The Pacific Way is built on respect, where problems and disagreements are resolved through conversation” and seeking consensus. 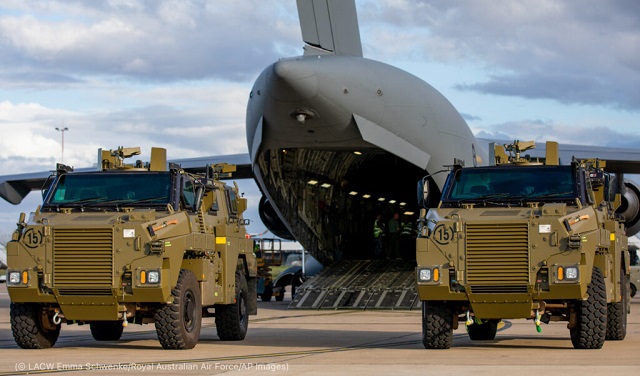 Australia, New Zealand, Japan and South Korea are accepting thousands of refugees from Ukraine or taking steps to ensure that Ukrainians living in those countries can stay longer.

These four Pacific nations are also sending aid to Ukraine’s military as it fends off the attack from an authoritarian neighbor. New Zealand has contributed $6 million in humanitarian aid to Ukraine and more than $10 million in military aid. Announcing the assistance, New Zealand Defence Minister Peeni Henare said the Russian government’s attack increases risk for countries everywhere.

“New Zealand may be a long way from Europe, but we know that such a blatant attack on a country’s sovereignty is a threat to all of us. That’s why we are doing our bit to support Ukraine,” Henare said April 12. New Zealand is deploying transport aircraft and up to 50 support personnel to Europe for two months and providing a range of nonlethal defense equipment.

“This fight is important because not only are Ukrainian lives and their lands at stake, but so are the principles of freedom and the rule of law,” Australian Prime Minister Scott Morrison said April 8, announcing additional military aid to Ukraine.