Partners for Progress: Disability Rights Group Gets a Hand from U.S. Consulate Nagoya

Almost 50 years ago, the world’s first independent living facility run by and for people with disabilities was opened in California, and just over 30 years ago, the passage of the Americans with Disabilities Act (ADA) prohibiting disability-based discrimination throughout the United States wrote a new chapter in the civil rights movement. Across the Pacific in Nagoya, Japan’s third-largest city, that same torch has been carried for decades by a pioneering advocacy group called AJU that has a long and mutually enriching history of cooperation with the U.S. Consulate.

AJU traces its roots back to 1971, when a group of Nagoyans with disabilities came together to advocate for barrier-free access to mass transit. At that time there were virtually no public toilets or train platforms in Japan that were wheelchair accessible.  Those pioneers later joined forces with a disability rights movement led by a Jesuit missionary who was a longtime Nagoya resident. Called Ai no Jikko Undo in Japanese – literally, “a movement to put love into practice” – the movement’s name was abbreviated AJU and would ultimately be attached over the years to an array of initiatives to improve everyday life for people with disabilities. Among the facilities that AJU has founded over the years are a summer camp, a wheelchair center, and even a winery that provides meaningful employment. Most impressive was the AJU Independence House, a facility opened in 1990 to offer an optimal balance between independent and assisted living for those with severe disabilities.

Two AJU members – Chieko Utsumi and Naoya Tsuji – embody the group’s close relationship with U.S. Consulate Nagoya and the Consulate’s commitment to raising awareness of disability rights in Central Japan, a bustling region of more than 15 million people sandwiched between Tokyo and Osaka.

As an infant, Utsumi suffered an onset of spinal muscular atrophy, a rare disorder that afflicts just one person in 100,000. The challenges associated with that condition did not hold her back, however, when the Consulate nominated her in 2016 for the U.S. Department’s flagship exchange program called the International Visitor Leadership Program (IVLP) on the subject of inclusive education. The experience in the United States proved to be a life-changing one. A quadriplegic, Utsumi quickly put the knowledge she brought home to work, revving up AJU’s wheelchair advocacy and sharing her story widely through media appearances and speeches. 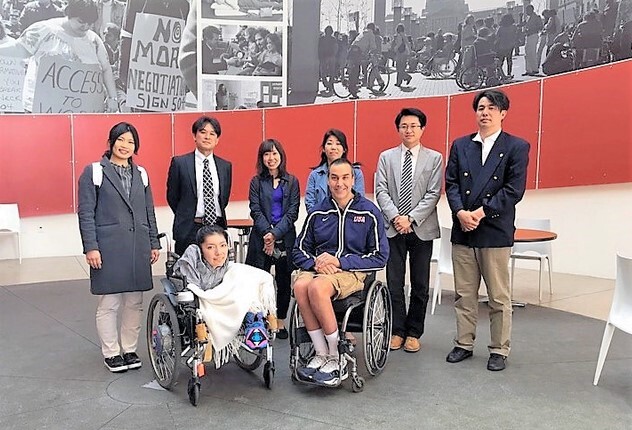 During her tour of the United States in April 2016, Chieko Utsumi (center left) learned about wheelchair sports from an instructor (center right) at the University of California, Berkeley.

Utsumi literally traveled the length of the United States, starting in Washington D.C. and ending up in San Francisco. That three-week, 3,000-mile journey led her to a two-word epiphany – “learning differences” – that she encountered at a progressive school in Manhattan. There, she says, she understood the power of diversity for the first time and was inspired by students who refused to be defined by labels. In Washington, Utsumi did a deep dive into the history of the ADA legislation. In Berkeley, she toured The Center for Independent Living, the institution that was the model for the AJU Independence House. What struck her most was just how much the ADA’s promise of equal rights and equal access has found concrete expression, starting with barrier-free seating on public transit. Even more eye-opening was the determination of her American counterparts to speak up for their rights. In Japan, she said, a lack of awareness of legal protections for individuals with disabilities has tended to blunt advocacy efforts. Her experience on the IVLP also helped her see that Japan is forward-leaning in many ways, such as the practice of mainstreaming children with respirators in public schools. Utsumi sums it up neatly: she came home from the United States with a first-hand understanding of what her own country does well, and what it could do better.

Tsuji suffered a spinal injury in a motorcycle accident that left him paralyzed and confined to a wheelchair when he was in his 20s. In 1998, he moved from a hospital to the AJU Independence Home. At first, he struggled in an environment where he found himself back in the proverbial driver’s seat. He adjusted well enough, however, to resume his studies, and today he is in charge of training caregivers on behalf of AJU. Tsuji also runs his own non-profit — fittingly named Challenge — that advocates for greater independence for individuals with severe disabilities, a cause he models in his everyday life. 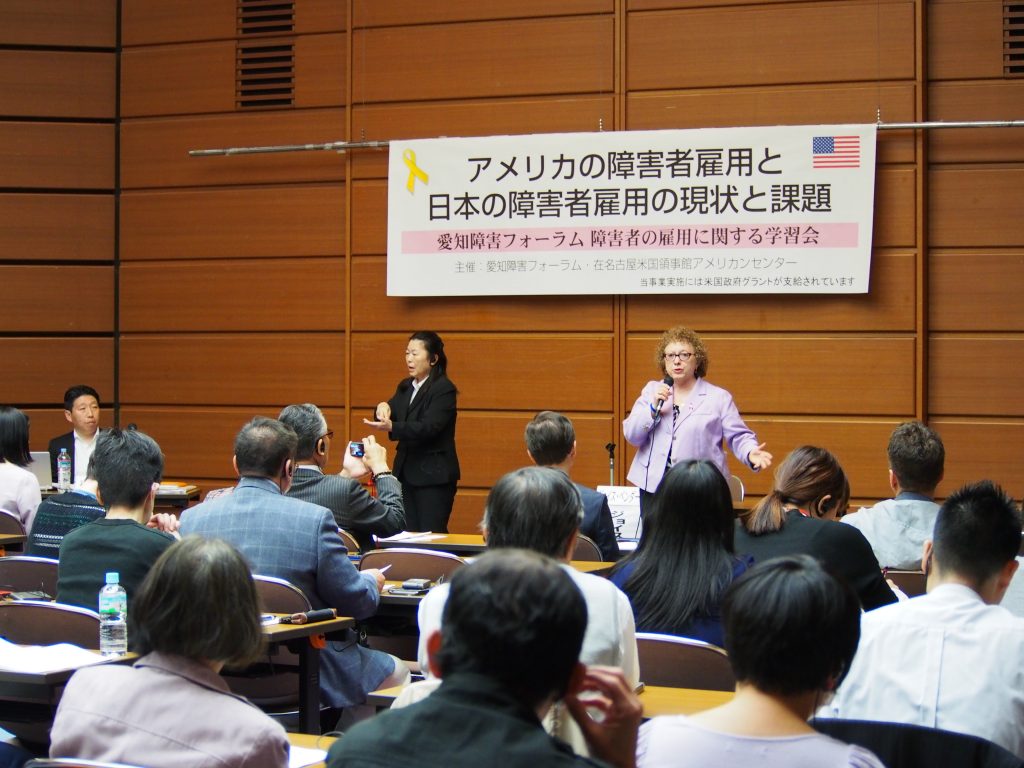 Joyce Bender presented a lecture in Nagoya on April 16, 2018 on the situation for people with disabilities in the United States and Japan.

Tsuji first collaborated with Consulate Nagoya in 2014, when an American disability rights activist visited the city as part of an Embassy-sponsored country-wide speaking tour. AJU co-hosted that event and two others with the Consulate, most recently when U.S. business consultant Joyce Bender came in 2018. Bender’s empowering message: hiring people with disabilities is a win-win for businesses, one that makes both dollars and sense. Tsuji says those programs literally brought home the significance of the ADA. AJU subsequently sent delegations to take part in events in the United States commemorating the 25th and 27th anniversaries of the landmark legislation, a diplomatic sortie that brought them together with like-minded advocates and allies from around the world.

The Country Next Door... in Nagoya

Then there’s the Handimarathon – an event launched by AJU in 1984 that brings together people with disabilities and their allies for a day of friendly competition. For some a jog, for others a walk, and for still others a roll around Nagoya’s iconic TV Tower, the Handimarathon created an unprecedented opportunity for people with disabilities to meet and be seen in Japan’s third-largest metropolis. Consulate Nagoya has been at the starting line of the Handimarathon since 2015, with American diplomats and Japanese consular staff taking turns pushing Tsuji in the wheelchair competition each year. For the AJU activist, getting that kind of support from the U.S. government was a revelation and an inspiration. It was as if America had morphed into the country next door, he says. He reaches for a cartoon metaphor to explain the relationship: “I feel like I can step through Doraemon’s ‘Anywhere Door,’” he laughs, referring to a space-time portal that is one of the many cool gadgets belonging to the beloved Japanese anime robot cat from the year 2112. 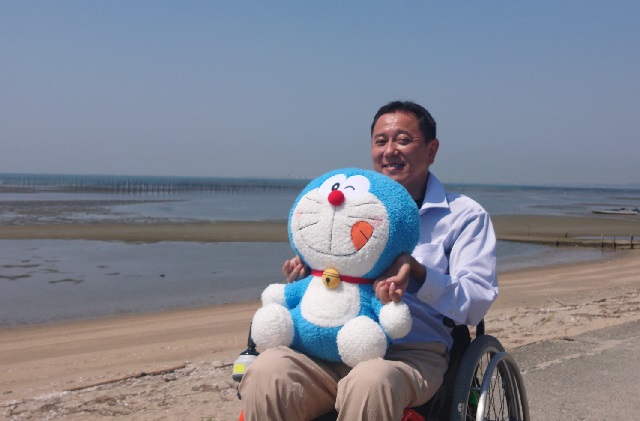 Tsuji is determined to build AJU into a platform for delivering the message of equal access and equal rights to a wider audience, and he says he hopes Consulate Nagoya will always be there whenever his organization needs a hand – or a push.

The Consulate is committed to providing that kind of support. We stand with AJU and other advocates for disability rights in Central Japan and deploy our public diplomacy resources to connect stakeholders and increase understanding. The Consulate may not have a space-time portal to offer, but we are proud of our ongoing efforts to open doors for many people with a spectrum of abilities.