The U.S. Embassy and Consulates in Japan are spotlighting heartwarming stories and photos of our employees and their pets during the pandemic. Let's honor those family members who often do not get recognition but whose unconditional love and loyalty keep us going in difficult times! 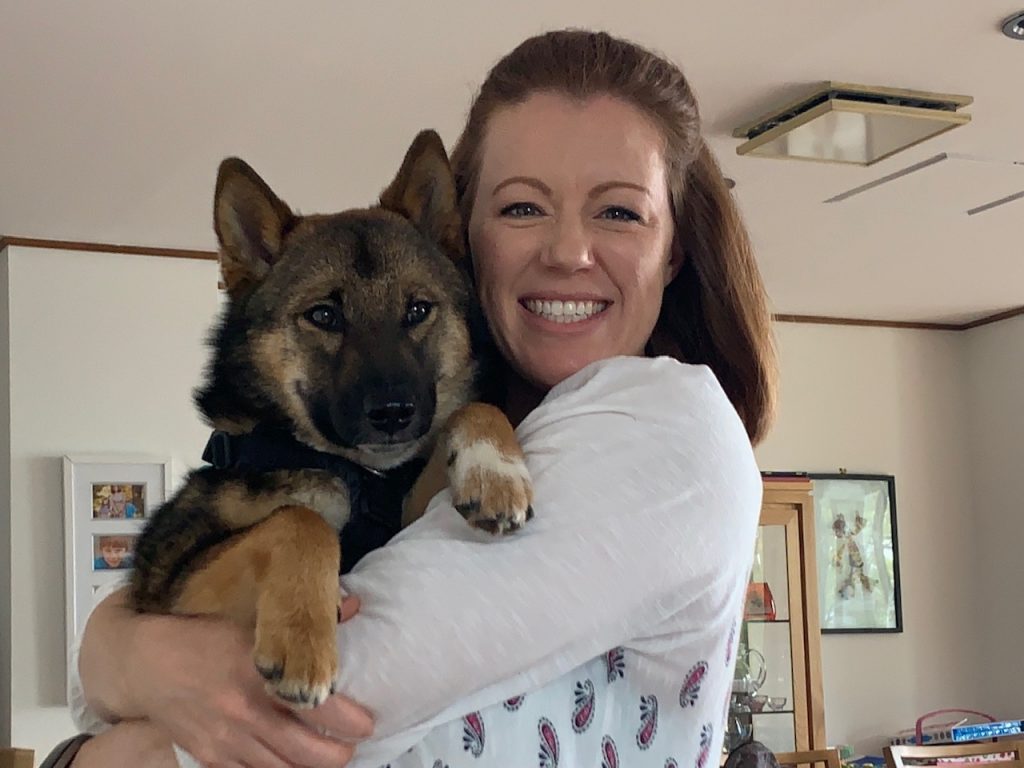 Meet Hisashi! We think he is part Shikoku Inu and part shepherd. My two children and I adopted him in early April from a rescue shelter when my teleworking and their remote learning had become the norm and we needed a furry companion and exercise buddy. He was eight months old then. It has been fun watching him grow, training him, playing fetch, and baking him homemade treats. Sometimes when we are feeling down or overwhelmed or anxious, just petting him seems to restore some calm and balance. It also feels good to support a local shelter—since we adopted, another of my Consulate Osaka-Kobe colleagues and our Consul General have also adopted doggies from there! 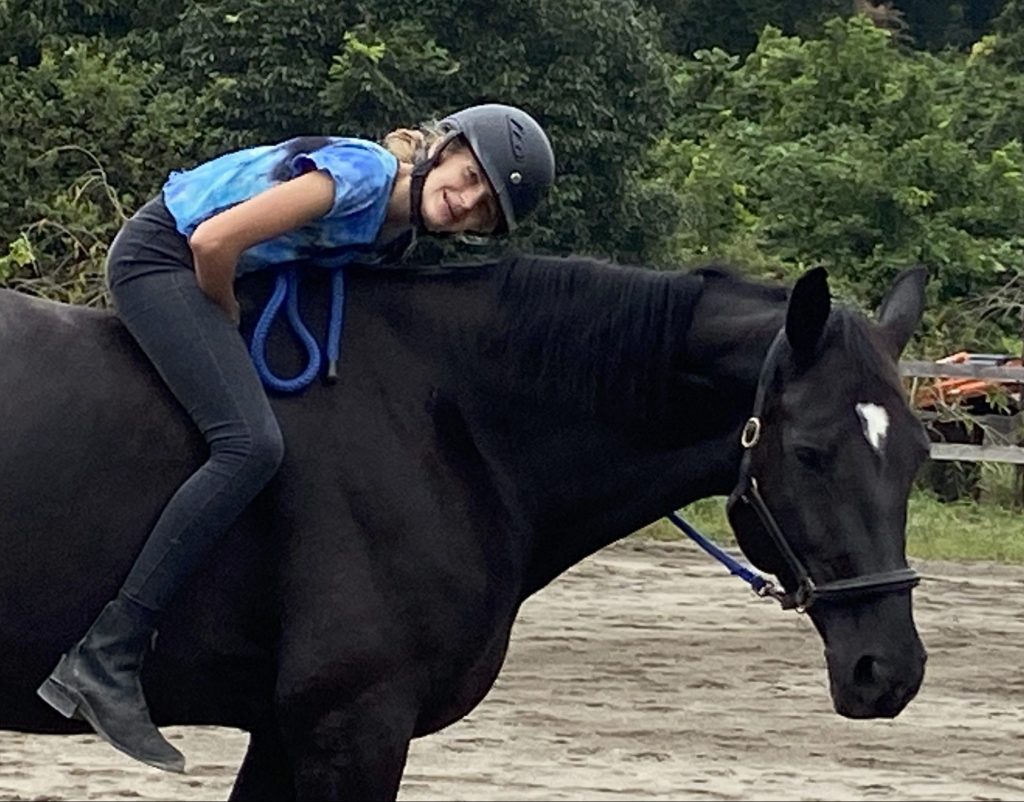 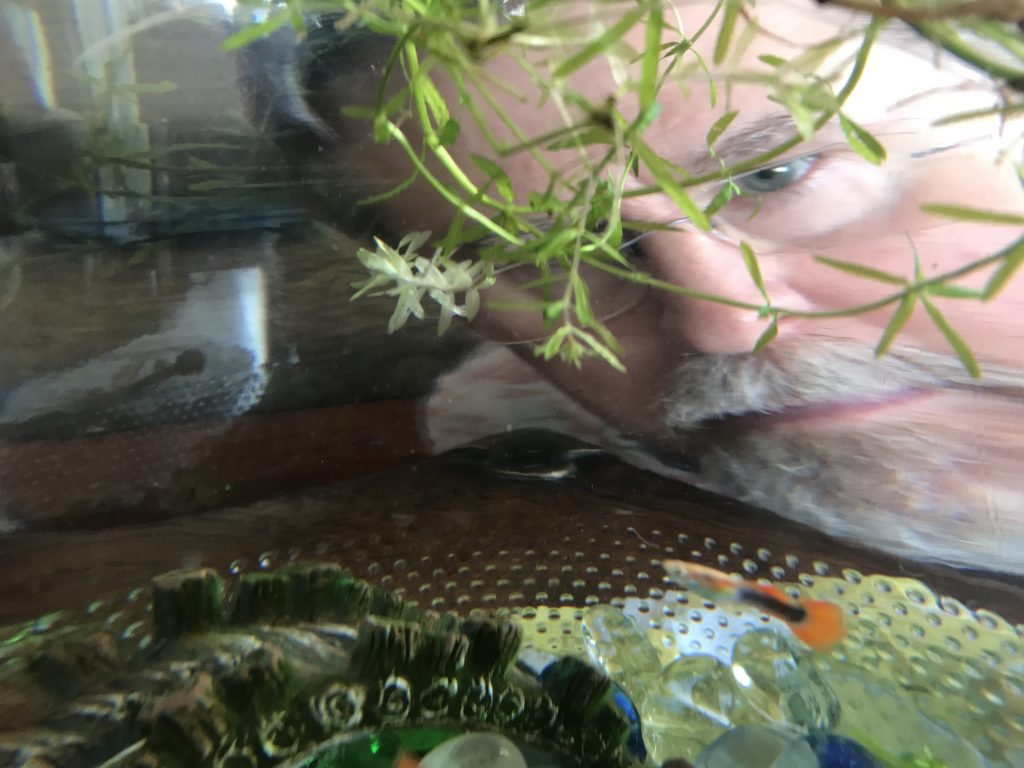 My apartment building has a very strict “no pets” policy. I am able to do a little gardening on the balcony, but as soothing as plants can be, they are very still. Having to work alone from home during the week and trying to avoid socializing on the weekends, I craved more active companionship. I decided to welcome some pets whose quietness would not betray their existence,  but who would bring much needed color and movement into my life. Guppies might seem like an unusual choice as companions, but they are smart, energetic little fish. I love watching them play together and race around the tank. When it’s time to feed them, I sing a song I made up: “Hello little fishes, hello, hello, hello little fishes, hello.” When they hear it, they dart to the top of the tank and swim around excitedly waiting to be fed. When I sang to the plants, all they did was sit there. 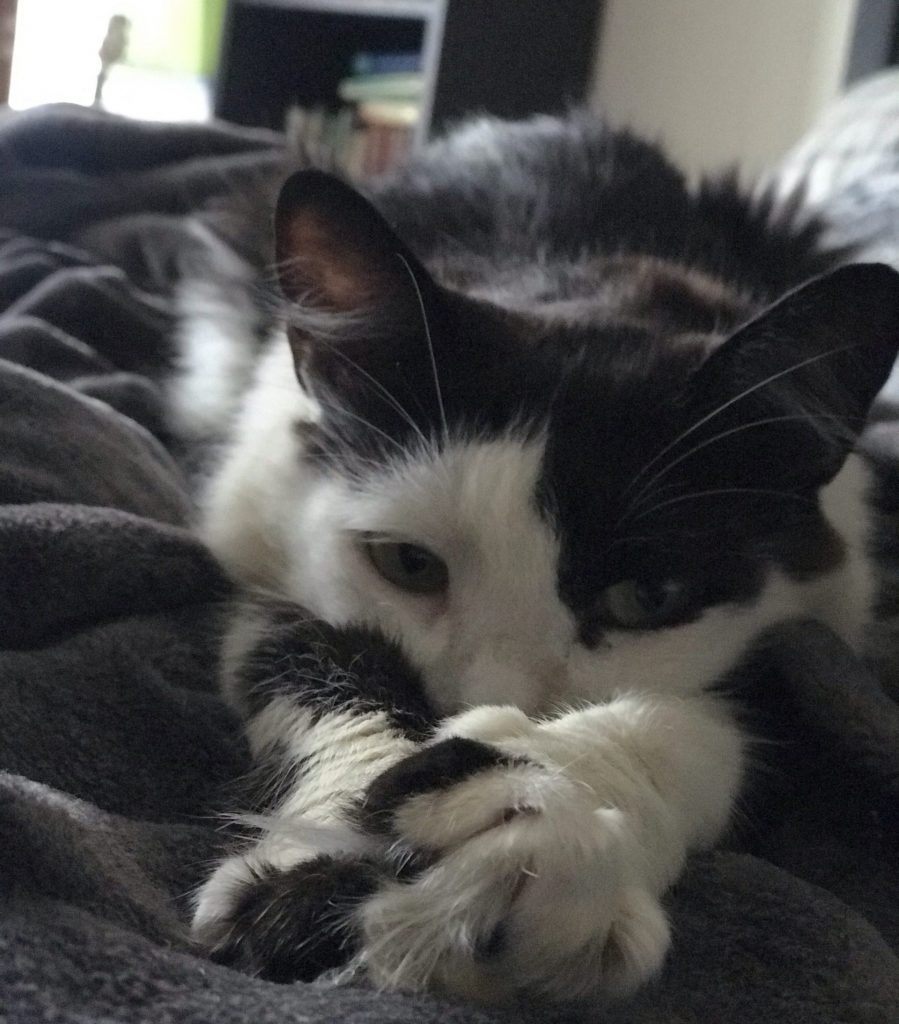 Captain Cookie loves to “help” me type. I’m not sure why he is so jealous of the laptop, but during telework he loves to lay on the keyboard, tap my hands with his paws, or just get in my lap and stop the typing altogether. His fluffy tail also often appears in video calls. He keeps the long hours at home from being too dull and demands that I get up and move away from the laptop from time to time, sitting next to my chair and tapping me gently with a paw until I pet or brush him. He greatly favors telework, as it means there is someone there to feed and brush him and a warm lap to sit in. I think he will be disappointed when life resumes its normal pace. 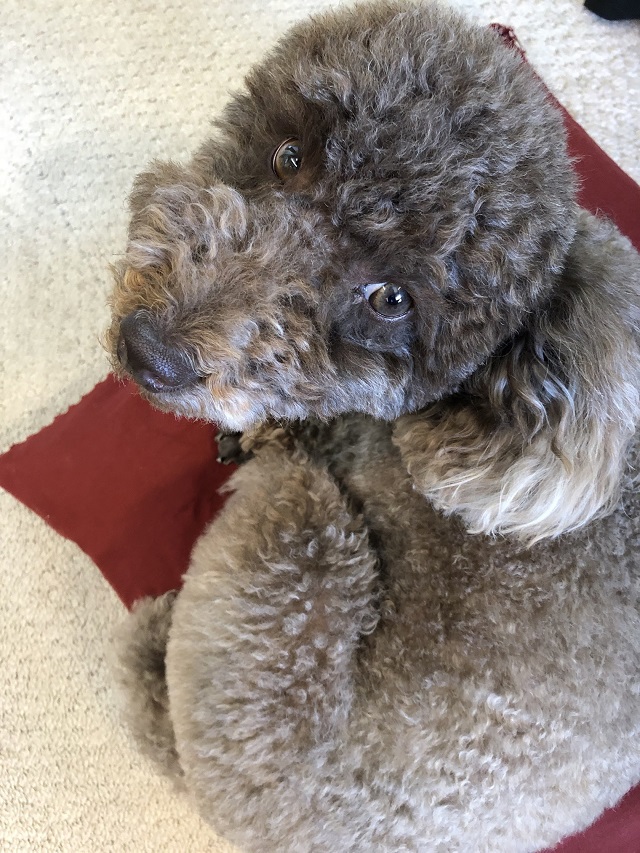 My dog’s name is Alejandro, but we call him “Ale-chan.” Although he’s a toy poodle, he is very big and weighs over 15 pounds, or 7 kg. He’s such a friendly dog and loves walking!

Since my children weren’t able to go out much during the first state of emergency, it should have been a very stressful time for us. But thanks to Ale-chan, the whole family was able to stay calm and relaxed. When I played with my children at home, Ale-chan would jump up on us as if he wanted to join in and rub his whole face against our hands to signal that he wanted us to pet him. It always brought smiles to our faces.

Ale-chan also kept me calm by sleeping at my feet when I was working from home. (Sometimes he caused problems by barking when I was on the phone or in an online meeting though!)

Alejandro is an indispensable member of our family!

My Cavalier King Charles Spaniel May loves it when I work from home. She wakes me up at 5:00 a.m. even on my teleworking days because that's when I get up to go to the office. She prods at me to stroke her belly while I’m typing on the computer and loves to steal my socks, drink my café latte, pull tissues out of the box, and bark at four-legged friends on TV, to get my attention. The only things about the pandemic that she doesn’t like are my facemask, because it’s a tasteless obstacle to licking my face, and the smell of sanitizer on my hands! 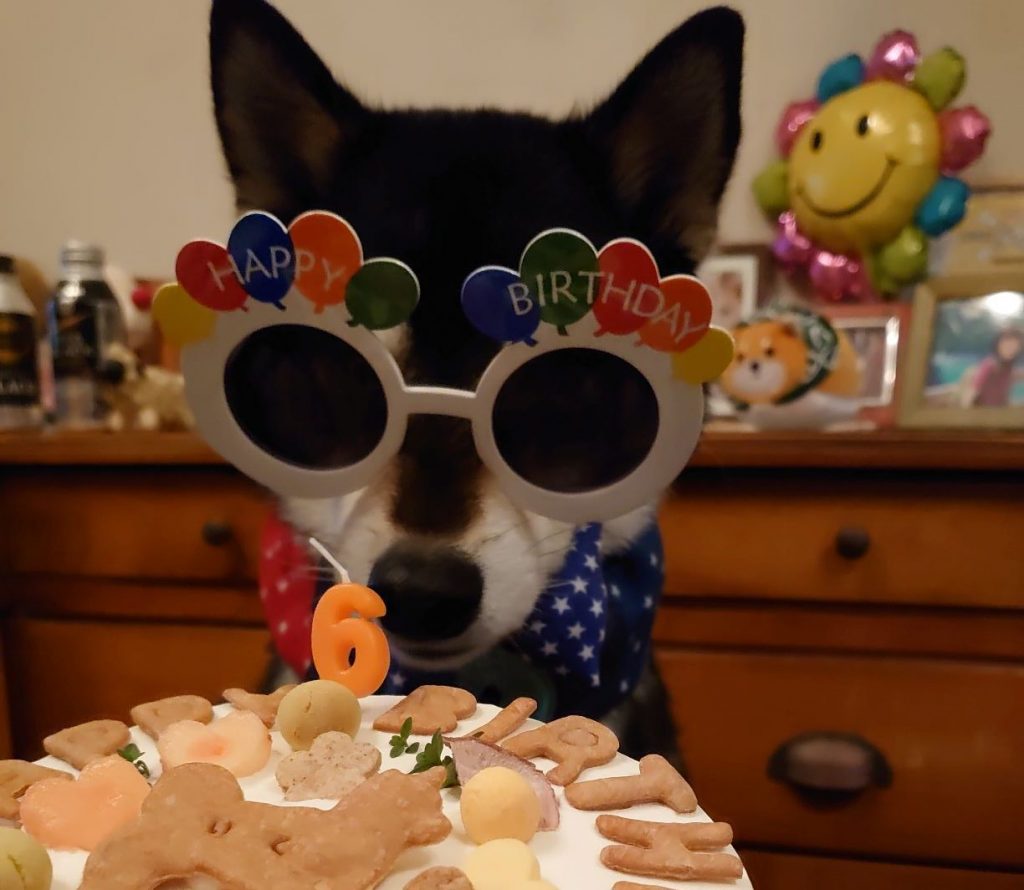 This is Riku, our six-year-old black Shiba Inu. Even though we haven’t been able to get birthday cakes for ourselves due to patisseries being closed during the COVID-19 pandemic, we managed to get a big made-to-order birthday cake for Riku! We’ve been getting plenty of exercise because we have to walk him every day! After the long rainy season, we went to Nagano to enjoy nature and rode in a gondola and a ferry boat on Lake Nojiri. We can do whatever we like with Riku as long as we stay safe! 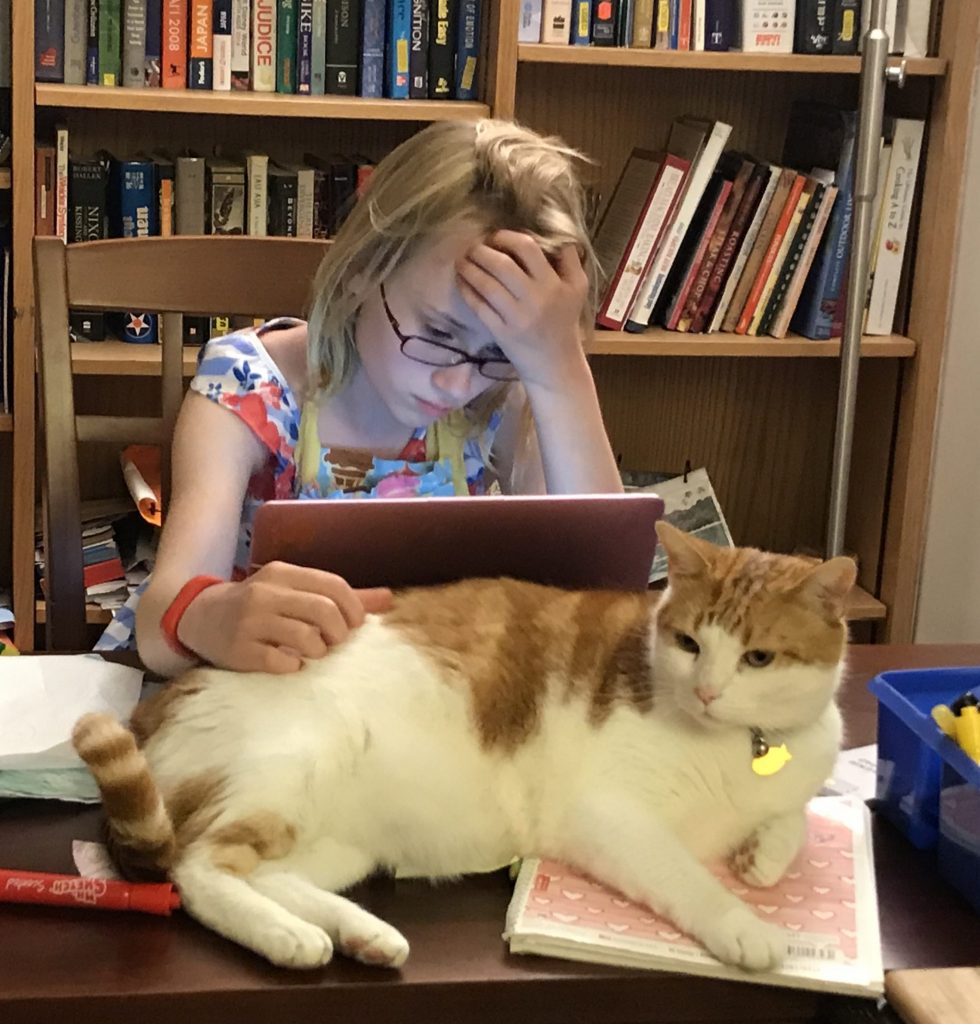 My 11-year-old daughter Mckinley has a cat named Bevo. Here’s what she has to say about him: “Today, I think he is kind, but a little demanding. I used to think he was scary. When he jumped to play, I was afraid he would scratch me. Attending school from home was stressful during the coronavirus. However, Bevo was there with me. He laid on my desk and walked across my keyboard. He was a great companion and having him by my side helped me get through online schooling. We are now great friends.” 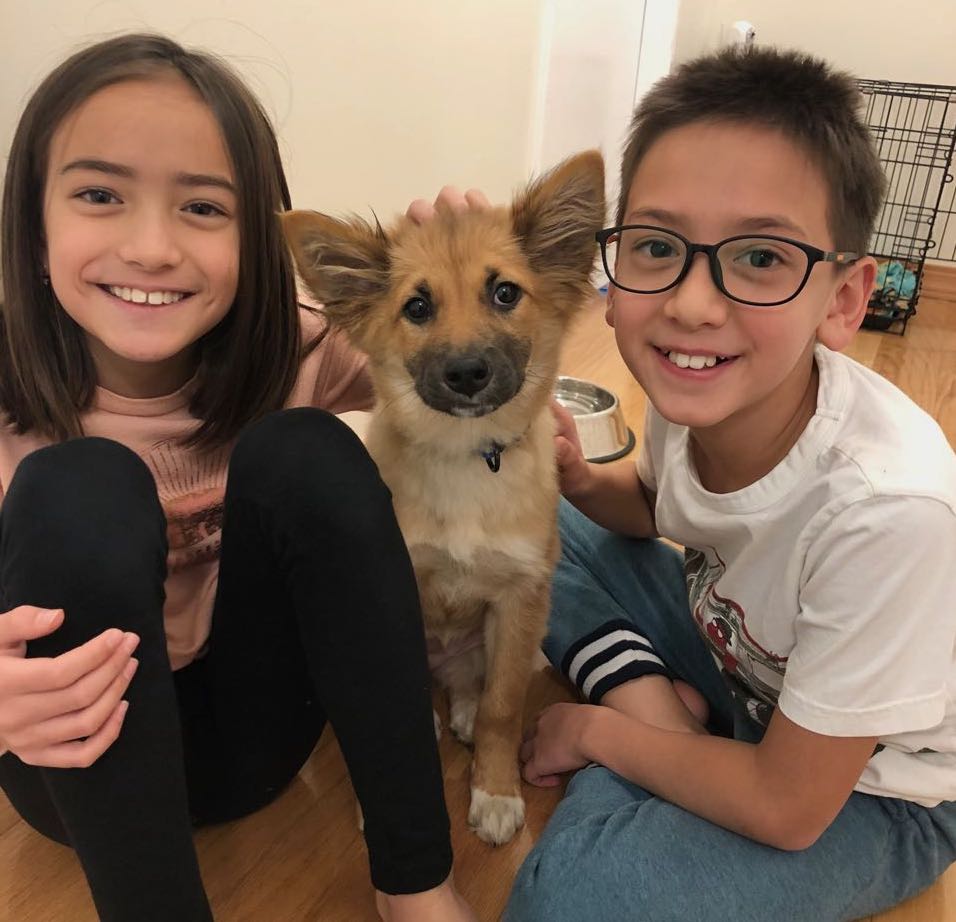 Hazel came into our lives in March after we patiently waited for a year to find a puppy. Luckily, we found her through a shelter in Tokushima, and picking her up from Haneda airport was easy. Hazel eased a lot of our family’s stress and anxiety throughout this pandemic and has been a constant source of affection and joy. She hangs out with us during videoconferences, online learning, and teleworking.  She loves playing with her friends at the newly renovated dog park. Though she is still scared of everything, she is getting more used to life in Tokyo and life with our family. 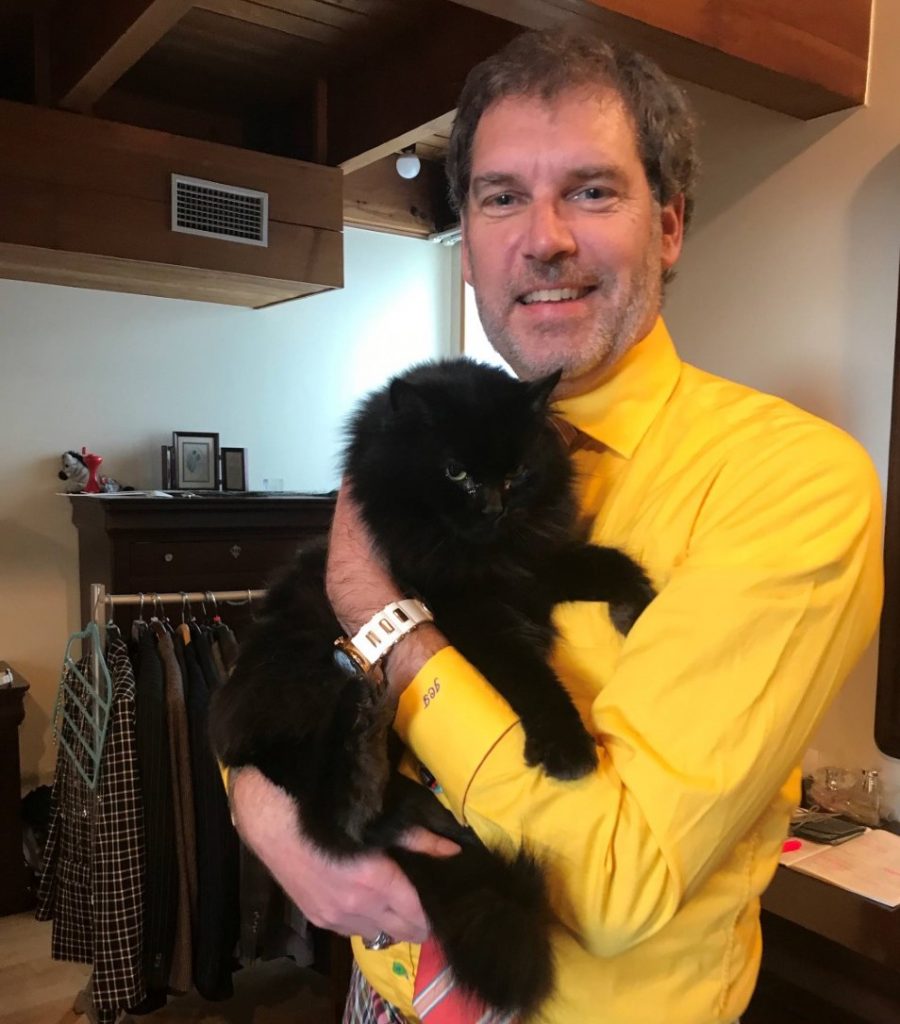 Goma is a Foreign Service cat through and through, and was living happily on the grounds of the Embassy in Harare, Zimbabwe, with people to look after her. When a New Embassy Campus was completed, however, the property was abandoned and moving her to the new location was not permitted. We thought we were doing her a favor by bringing her home to live with us, but now we feel she is the giver and we are the receivers of abundant love and affection. After spending so much more time at home during the initial stages of the pandemic and having her hang out with me at my workstation, when I started venturing out again she would always come running to the genkan to greet me when I came home, more like a dog than most cats we have had. Thanks to Goma, spending more time at home is a welcome prospect. 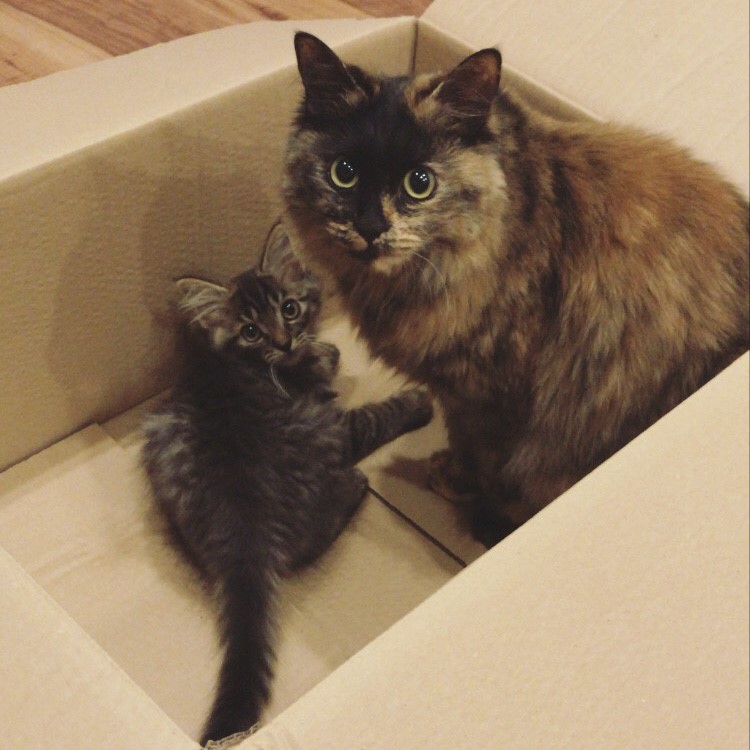 We have a cat named Koma. She always used to wait quietly at home while we were out at work and school, but since I began teleworking she started sitting right on top of my keyboard to get attention. That made it hard to get any work done! Just when I started to think it might be a good idea to adopt another cat for her to play with, I heard that a cat rescue group was trying to find a home for a kitten. We adopted him right away. Koma was fascinated when she saw the new kitten for the first time! We’ve named the kitten Tuna, so the two of them together are komatsuna (Japanese mustard spinach)! 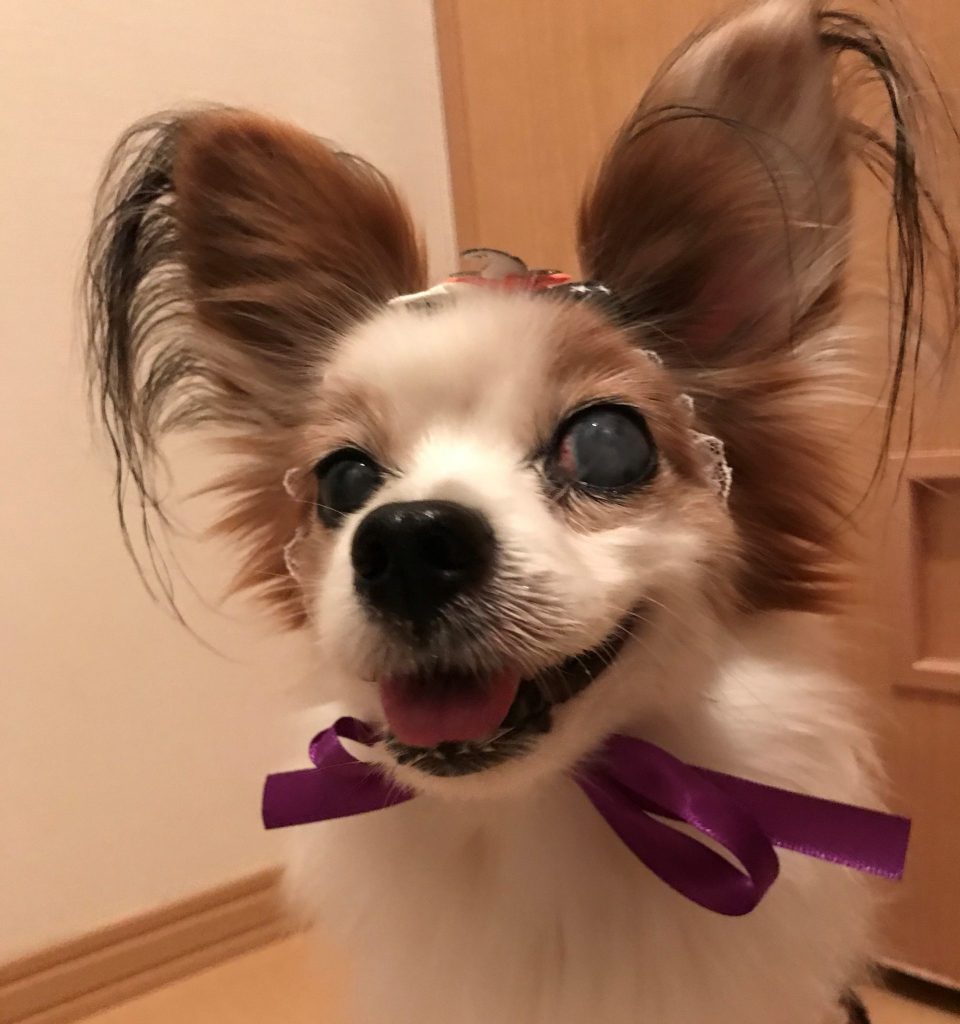 Haru is a 14-year-old Papillon. She lived at a breeder’s house for ten years and never went out into the world so she’s still very shy and nervous about playing with other dogs or people. That’s why it doesn’t really bother her that she hasn’t been able to go out much or spend as much time at the dog run since the coronavirus pandemic hit. She’s actually been happier and “smiling” more since I’ve been teleworking because she has her human family close by 24 hours a day. She’s brought me so much happiness by showing me how to live in the present moment and not worry about the future. Thank you, Haru! 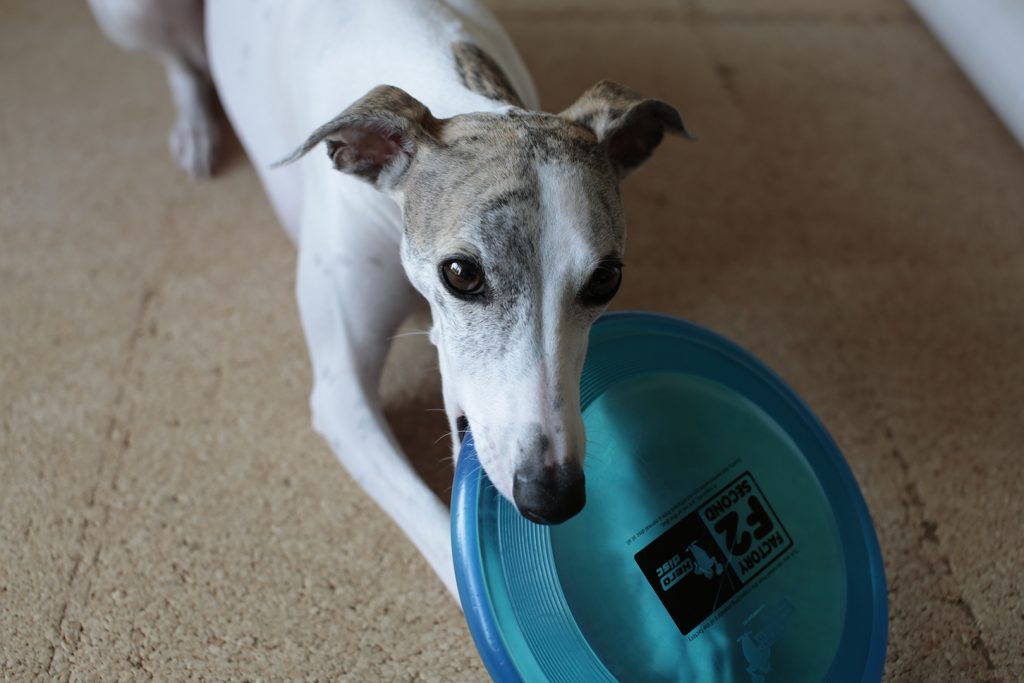 This is my three-year-old Whippet named Mokume. She just started competing as a disc dog this year, but then all the competitions were canceled because of the coronavirus pandemic. Disc dog is a sport for dogs that was born in the United States, in which dogs score points and compete by running after flying discs and catching them on the ground or in the air. Even though we haven't been able to practice much, we’ve continued training at home by playing and throwing the disc to her and having her bring it back. We have to stay home more than usual these days, but that’s given us more time to spend with Mokume and it’s been a nice change of pace. 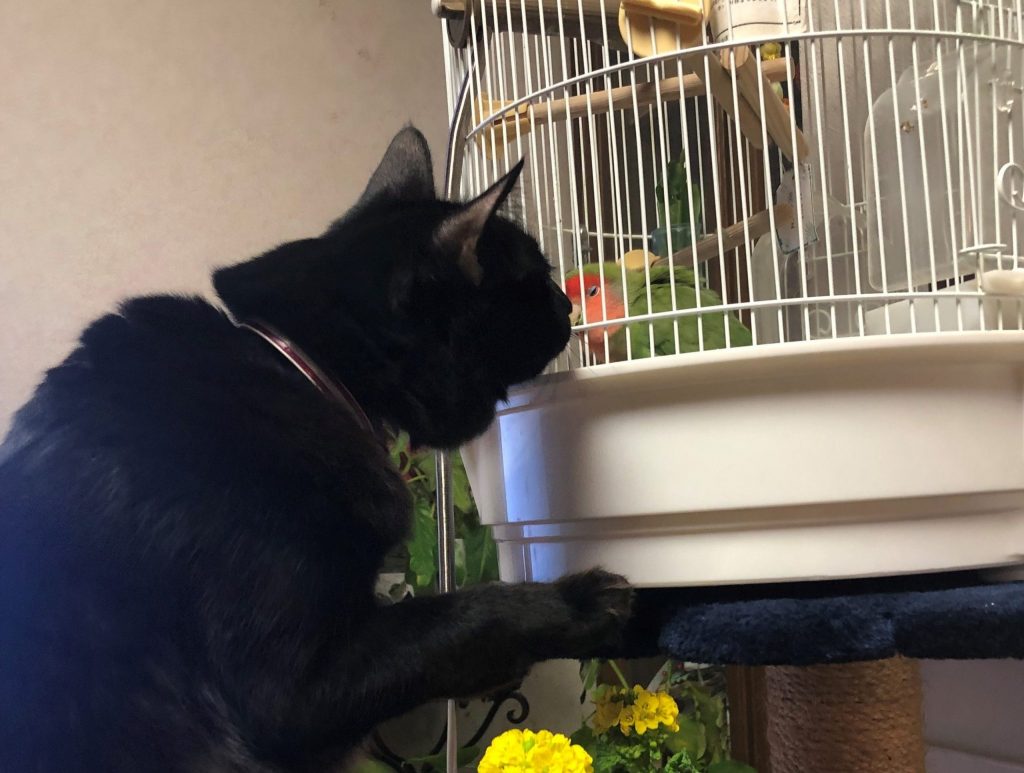 Teleworking was stressful for me at first because I’d never done it before and I wasn’t able to interact with my colleagues as much as usual. But it also gave me an opportunity to observe firsthand how my two pets usually spend their days. Watching their craziness often brought a smile to my face when I was feeling anxious. I guess they’re rewarding me for feeding them so well by helping me out during a difficult time!

When I look at this photo, I feel like I can hear my bird Piko saying: “My owner has no idea what a terrifying life she's created for me by having a cat in the same house. The cat usually acts like Tom in ‘Tom and Jerry,’ sometimes even knocking over my cage and putting my life in danger, but all this talk about social distancing kind of makes you want to get closer to others, doesn't it? What am I doing letting him kiss me now? This COVID situation has triggered a 180-degree turnaround in my values, hasn’t it?”